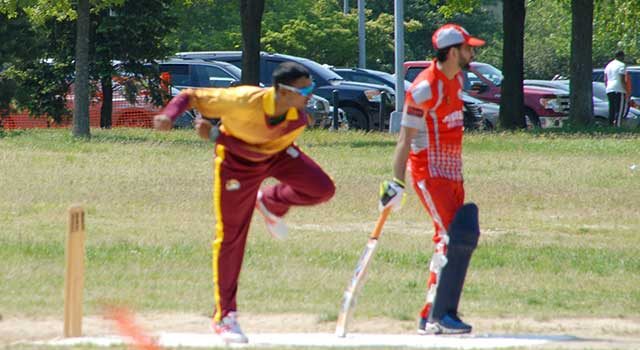 Pictured above, Justin Gangoo of Cosmos captured 4 for 42.

By Sham Ali
(Celebrating 40th Anniversary – Match #1085):- This new look Cosmos team appeared destined for success in the near future, but for now they simply have to absorb some of the agonizing experiences of loosing a few games and keep chiseling away at a mold that will eventually bring success.

In this match-up against Sheffield openers Akeem Dodson and Abdullah Syed capitalize on their early reprieve, seven to be exact, to post a commanding century partnership after both batsman survived paceman Thohiduzzaman Rana. Rana got his third ball to move away and dragged Syed into an ambitious drive that resulted in a healthy edge to wicketkeeper Jason Hall who grassed a regulation catch. In his second over Dodson, cramped for room on a pull found Alex Chunilall at short mid-wicket but he did not timed his leap to hold on to a catch above his head. Syed then banged Kevin Balgobin into submission when he launched into him in his first over in which he flayed 21 runs to open his account. Cosmos would rue their mistakes as this pair had a mix of aggression with some good running between the wickets. To further add to the to the wound spinners Khamraj Conyers and Justin Gangoo could not hold on to return catches offered by both batsman.

Cosmos was made to toil for seventeen overs before they eventually severed the partnership after the break. With the score on 121 runs Gangoo had a double blow in the 18th over. He trapped Syed (65) with a quicker delivery and then he bowled Dodson (45) when he induced him to push down the wrong line to a ball which beat his outside edge and clipped the off bail. Daniel Chunilall rotated his bowlers well and another change in the attack yielded results when Alex Chunilall held on to a simple return catch to remove N. Ramrattan (8), and Rana in his second spell after a few crucial miss-chances earlier immediately got into the wicket column when he had both Dennis Evans (37) and Z. Tariq (2) caught behind to complete an excellent spell.

Despite the miss chances earlier in the inning that were not of a drop-head nature but more of ooohs, Cosmos boys fought themselves back into the match. There were no shortages of effort though; Evan’s was put down at point off Rana when Gangoo went airborne in a brilliant one-handed effort to his left and grassed it when he hit the ground, it would’ve been a stunner. Balgobin made a gallant effort when he chased down a skier from Smith, running back from short mid-on and if he had an extra ounce of breath in the tank he might have held on. Gangoo then bowled Ahmad Dodson with a faster ball. He then passed the edge of Ordelmo Peters, the former Jamaica opening batsman, which sparked a few encouraging words from Peters, and a few more after the next ball as he made his way to the pavilion when Gangoo held on to a rocket return catch. Daniel Chunilall then affected a brilliant run out off his own bowling when he shy down the stumps at the non-strikers end to put an end to the Sheffield inning at 226 all out. J. Gangoo took 4 for 42. T. Rana 2 for 42. D. Chunilall and A. Chunilall took one wicket each.

Cosmos in reply found themselves in some early trouble at 8 for 3 in the fourth over, a restorative partnership between Devon McCarty and Shane Singh to took the score to fifty before Shane (18) was deceived by a flighted delivery from left arm orthodox T. Prasaud that went through the gates to rattle the stumps as Cosmos batsmen for the second time this season struggled to find some resource under testing times at the wicket. Sheffield bowlers kept a steady line as they constrain and pressurize the Cosmos middle order. McCarty battled a lone hand and was beginning to find some form as he anchored one end, but wickets kept falling and the Cosmos inning tapered out rather tamely in the end. Only McCarty and Balgobin got into double figures with 19 runs each when Cosmos inning closed on 104 all out in the 25th over. The threatening thunderstorm could not save Cosmos, and while they may be two down in two matches their results can be summed up for a lack of experience with the bat and they allowed their fielding to fall back to a-high-school-grade at times; an area where they have showed glimpses of brilliance but was below par on this day. N. Ramrathan took 3 for 15. M. Abdullah 2 for 23, Z. Tariq 2 for 22, T. Prasaud 2 for 28.

Cosmos will host Punjab at B32 on Sunday.