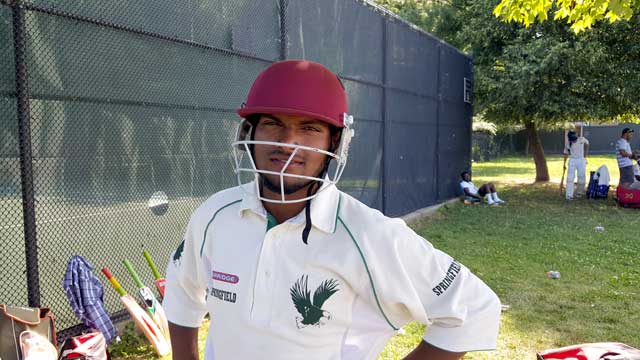 Cosmos has had a long history of tense battles with Spice Island and last Sunday’s match-up was another one of those last ball thrillers. Spice Island veteran, Glen Phillips and David Williams have been there for all of them, and was in the ‘thick-of-things’ again. However, on this occasion it was Cosmos youth (Chuninlal), and Spice Island experience (Williams) in battle. In the context of the game, that is an invaluable picture, and one that is evidence in Cosmos’s perseverance in their youths.

Cosmos won the toss and invited Spice Island to bat; a decision that has evoked bags of hot air in the past. Rasheem James had an eventful 14-ball first over in which he managed to induced L. Chaitan into a pull that flew ‘miles’ in the air where Kevin Prince waited at mid on and held on to a good catch by which time James was on his 12th delivery and breathless. Prince relieved James of the misery and immediately accounted for K. Parris at mid-off where D. Prince, next of kin, held a catch with such alacrity that made it look like it was part of the plan. Hooper (25) then chance his hand for a few lusty blows, before he skied one to Ali at cover.

At 51 for 3, Williams was still there, but looked a little circumspect against Alex Chuninlal, right arm off spin, and Parmanand Sanicharan (Dillon), left arm chinaman. The duo kept the pressure on Williams until he decided to free his hands and swept to deep square leg boundary where ‘Big’ James held on to a ‘youthful’ catch. Sanicharan then had C. Chateau skied to mid-off where he asked Kevin Prince to ‘please catch it’ and he did. The next ball from Sanicharan went through the gates of K. Alexander, and Cosmos appeared inspired. It extracted a ‘lighter’ comment from the senior umpire, that Cosmos played better when short( no pun intended that Dillon is only 5ft tall).

Glen Phillips, the veteran and spine of Spice Island for the last three decades had a good knock with a two maximums before he was run out, but not before he managed to push his team to a reasonable 141 for 8 in their allotted 30 overs. P. Sanicharan 3 for 34. K. Prince 2 for 24, and A. Chuninlal 1 for 15.

Cosmos needed a big inning from one of their batsmen and Daniel Chuninlal responded to the challenge. He featured in a dogged opening partnership with the ever positive Kevin Prince who was solid in defense. When Prince (10) missed a full delivery just before the break the partnership had worth crucial 52 runs in 13 overs. Sanicharan didn’t last long when he was deceived by a slower ball from Chaitan and popped to cover. James then joined Chuninlal and the pair stitched together another partnership that pushed Cosmos passed the 100-mark. Cosmos boys scented a whiff of a win with the in-form James looking solid and Chuninlal playing a steady hand and stroking the ball with authority.

At 113 for 2 in the 25th over, Chuninlal and James had chiseled off a large piece of the target in a partnership worth 60 runs. With twenty-nine needed off four overs, James picked out the man on the mid-wicket boundary, and Ali holed out at mid-off.

Cosmos weight remained on the shoulders of Daniel Chuninlal, and he held his composure and asserted his maturity as a promising young player. He had looked the part from early in this match when he opened his inning with thumping straight drive off paceman Hopkins, and then proceeded to weather the opposition’s opening attack with a stony occupation at the crease.

With the match on razors edge Chuninlal then unleashed two vicious pull to the mid-wicket boundary that further established his resilience and intend on taking his team pass the finishing line. It is one of those reminders that winning a cricket match is only a minor victory, but perseverance in the younger players has its rewards as Daniel Chuninlal showed in his sense of command under pressure and pushed his team to within eight runs for victory

At 134 for 4 in 29 overs. Cosmos needed eight runs to win in the last over with Chuninlal on strike and David Williams with ball in hand. Alex Chuninlal and Danny Prince debated rather silently as to who will go next if a wicket falls. Danny looks more confident and got the nod, but they are both capable.

Daniel Chuninlal has played, to this point, one of those innings that usually gives young batsmen, or any batsman for that matter, their identity. He showcased the traits of a good young cricketer, and subsequently asserted himself as one of the promising young players to watch. He delivered a ferocious pull off the first ball from Williams which bisected the two men on the boundary at square leg and Cosmos camp had an adrenaline burst.

With 4 runs needed off 4 balls Chuninlal had two huge swings and missed both, but then he settled and a drove the 4th ball for two to mid-off. Williams fret. Two off 2. Chuninlal has done all the hard work so far, can he pulled this off? Williams delivered a juicy full toss, it was just what Chuninlal needed and he pulled it flat and hard, and it landed into the hands of the man at mid-wicket to bring an end to a brilliant inning of 68 runs.

Danny Prince ran to the wicket like a man on a mission, he dropped his glove on the way and turned around to pick it up. Davis met him half way, and they had a long chat about the science of the game as they walked to the middle of the pitch, and with a firm bump of the gloves they headed briskly to their respective crease.

Alex is fully padded up, the pad is a little too big for this 15-year old. Something is about to happen, you can feel it in the air. Kevin assured me that “we got this skip don’t worry.” The opposition’s men are on their toes, but not Glen Philips; his knees are talking to themselves.

Danny the the non-strikers end with one hand holding the handle and the other on the blade of the bat. He is ready! Davis is on strike. He swung at a ball close to his body; it’s a thick edge that flew to the man at short third man. They raced passed each other and turn for a tricky second. The throw comes in with four men converging around the wicket, it’s a little wide and is intercepted by one of the fielder. Davis dive, his bat got tangled in the duct-tape on the edge of matting and a storm of dust arose when he landed. It’s a perfect dive, perhaps a 10 on the last try. The ball is spilled, umpire Steve Bucknor, the former international umpire has seen many endings like this before but not with duct-tape, a said NOT OUT. Williams hands on his head, and Glen is still fretting.

Cosmos boys are jubilant. If you were a spectator you might think that this was a final. Actually, it is just another match that makes for good memories for these youngsters when Alex, Kevin, Dillion and Daniel storm the field, James couldn’t, he is too tired, so he and I waited for the boys on the boundary. Cosmos won.