Baseball’s Cousin Cricket Drops In For A Visit

Cricket All Stars Ready to Play at Iconic Baseball Stadiums

By John L. Aaron
New York City – Being apart for over 170 years can create some serious family feuds beyond the Hatfields and the McCoys. However, in the world of sport – all’s well and all’s fair – even hosting distant cousins for a star-studded and star-spangled drop-in pitch party in the some of iconic baseball homes; sends a warm welcome message. 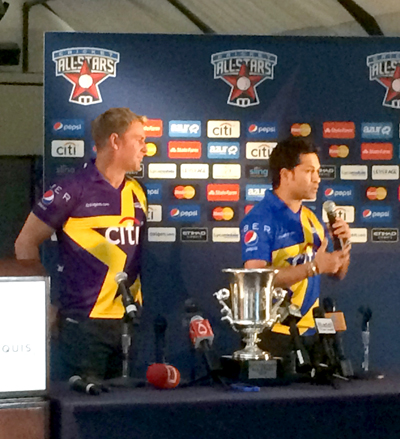 Shane Warne (left) and Sachin Tendulkar at the press conference which was held in New York City. Photo by John Aaron

Over the next two weeks, some iconic baseball stadiums will be slightly modified to host the not so distant cricket cousins, in what promises to be a truly star-studded gala. Judging from the amount of media that jammed the 16th floor special events room at the Times Square Marriott Marquis hotel in New York City yesterday, its game on for many fans and the players alike.

Led by two iconic cricket figures Sachin Tendulkar and Shane Warne, the Cricket All Stars play their first match of the tour on Saturday, November 7 at 1:00pm to Citi Field – home of the New York Mets baseball franchise and one of this year’s finalists in the October Classis – baseball World Series.

The All Stars including some of the most beloved, revered and iconic cricket figures of the past two decades – give or take – including Brian Lara, Shaun Pollock, Matthew Hayden, Sourav Ganguly, VVS Laxman, Jacques Kallis, Jonty Rhodes, Mahela Jaywardane, Kumar Sangakkara, Muttiah Muralitharan, Curtly Ambrose, Carl Hooper, Ricky Ponting, Daniel Vettori, Glenn McGrath, Andrew Symonds, Michael Vaughn, Wasim Akram, Virender Sehwag and Shoaib Akhtar. The players are contracted for a total of 15 matches over the next three years around the world, as the Tendulkar and Warne duo help evangilize the sport and attract new fans.

Speaking during a news conference yesterday Shane Warne said, “We think America is ready for T20 cricket, and I can’t wait.” His partner in the initiative Sachin Tendulkar, responding to whether cricket can compete with so many other sports on the American landscape, said “We are not here to compete against any other sport. We are here to popularize cricket,” adding, “We want to win hearts, I know that Americans love sport and cricket is one sport that everyone is waiting to embrace. We will compete very hard. Off the field we are good friends, but on the field we will play hard cricket.” 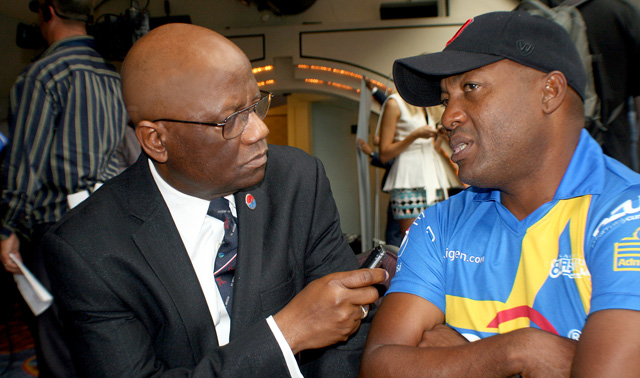 Tendulkar said that one reason for him picking up a bat after retirement was to globalize the sport, a sentiment he said was shared by Shane Warne, as well. Warne said that the reason there were 30 superstars involved in the tour was because they all wanted to help cricket grow in America and to provide the fans, many of whom had only had the chance to see the players on television. He added, it is an opportunity for cricket fans to bring along their American friends to the matches, so as to learn more about the second most popular sport in the world.

I had an opportunity to sit with Brian Charles Lara and asked him to compare his 2006 visit to play in New York at the Floyd Bennett Field and this upcoming tour. He said he enjoyed playing in the 2006 matches in Brooklyn with the other West Indian players, however, this is different as fans will have the opportunity to see a wider array of international players perform.”

The World Record holder Lara said he was proud to have been selected, and it was an opportunity to introduce the sport to a nation that does not know that much about, although it will be hard to access what one weekend can accomplish, but he thinks that with the hype and excitement that cricket generates, he is confident that the sport can grow in America. The Prince as he was known said the American fans would be treated to some wonderful cricket.

Both Carl Hooper and Sir Curtly Ambrose are elated at the opportunity to play before an American audience, neither of them have played cricket in New York before, although Ambrose was quick to point out that he had witnessed a few matches in New York.

Carl Hooper, the former West Indies all-rounder was anxious ahead of the team paying a visit to Citi Field following the press conference, curious about the logistics of playing cricket within a baseball diamond, and the proximity of the boundary to the pitch. When told it would be about 60 yards away, he raised his eyebrows and said that the pacers would probably fare better in the bowling department than spinners like himself.

Sir Ambrose, sporting a unique hairstyle said his tour skipper Sachin Tendulkar would probably have him bowl 2-3 overs flat out, depending on the playing conditions. However, both former West Indies greats were as excited as teenagers on the eve of a prom. The excitement and electricity generated sixteen floors above Times Square was fascinating; as the grown superstars all had twinkles in their eyes, reuniting with fierce old rivals and the anticipation of playing alongside each other.

The highlight of the press conference was no doubt the draw of the players for each of the two teams. Early in the draw, it appeared that fortune would dictate a South Asian XI against an Australian XI, as the players were being selected blindly by the two intended captains Shane Warne and Sachin Tendulkar.

In the final draw, many in the room thought the two teams were evenly balanced.

If the excitement and energy witnessed in the room is any indication of the next two weeks – three City tour, then cricket starved fans are in for a real treat. It is akin to having one of every item on the menu sitting on a plate in front of you.

This may be the start of something great for cricket in the USA.