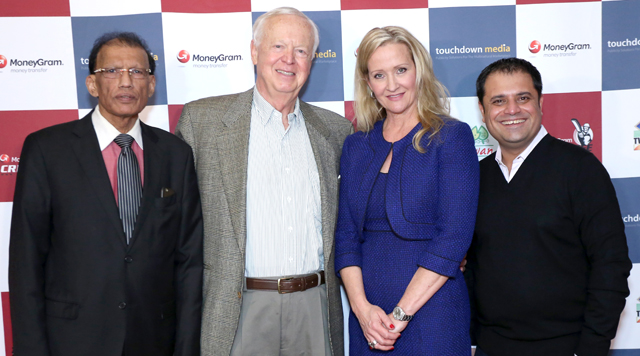 Leading multicultural marketing firm, Touchdown Media Inc. and MoneyGram, (NASDAQ: MGI) a leading global money transfer service, today announced the kick-off of the first annual Cricket Bee sponsored by MoneyGram. The new competition allows cricket fans to compete for prizes while sharing their knowledge of the game in an effort to win a cash prize of $10,000.

Open to those 18 and older, the contest will begin with regional rounds in New Jersey, San Francisco and Toronto, each testing participants’ general cricket knowledge. The regional contest will have two components, a written test and an oral test. In the written qualifier, contestants will be asked 35 questions. They must get at least 25 correct in order to advance to the oral round. In the oral round, the contest will be held on a miss and out basis; simply if a contestant misses the right answer, they are eliminated.

The three finalists in each regional round will move on to the grand finals. Unlike quiz shows, the Cricket Bee will be conducted so that contestants are actually competing with themselves and the question posed to them as opposed to their peers. In the oral round, the initial rounds will be category wise.

Contestants can register to compete in the game of their choice at www.cricketbee.com. A sample set of questions and sources will be provided for the participants.

“We are proud to sponsor the 2016 Cricket Bee,” says Joann Chatfield, MoneyGram’s vice president of marketing. “We know that the passion for cricket unites friends and loved ones around the world and brings them closer together.   It’s always exciting to be a part of initiatives that support out South Asian communities.

Kawan Foods will serve as the powered by sponsor for the innovative event and has been deeply involved with the South Asian community through various initiatives and hopes to connect with the entire Cricketing community here in the US and Canada.

“Cricket is an integral part of the demographic and as a household brand, we want to involve ourselves with initiatives that bring the community together,” said Tim Tan, MD Kawan Foods.

The brainchild of Founder Rahul Walia, who is credited with launching the successful South Asian Spelling Bee and other multicultural platforms, the Bee promises to attract all Cricket enthusiasts to test their knowledge and skills.

“The game of Cricket is an integral part of any commonwealth Expat community in North America and the objective is to leverage the passion of the sport to engage the diaspora in a fun and informative manner while promoting the game to the next generation,” said Walia.

TV Asia will serve as the exclusive broadcaster for the event and has been a strong proponent of promoting Cricket in the country. The broadcaster has been avidly involved with American College Cricket and also sponsors school children to play cricket in India.

“As the oldest broadcast medium for the community, it’s definitely an honor to be the exclusive broadcaster for the first ever MoneyGram Cricket Bee. We pride ourselves with connecting with our community and this initiative is in line with our continued commitment to the diaspora in North America,” said HR Shah, chairman and CEO of TV Asia and an avid cricketer himself.