By Stan Walker
The Cricket Hall of Fame is very excited to kick off this year’s Connecticut Cricket League’s season by organizing a youth cricket program in collaboration with Hartford’s Police Athletic League (PAL). The program which began on Tuesday, March 31, at the Global Communication Academy’s (formerly Quirk Middle School) gym, in Hartford, is aimed at helping to add value to the local community by promoting an active lifestyle for all children through the playing of the game and to introduce the great sport to the younger generations.

Expressing just as much excitement about the program as the Hall of Fame’s members were Hartford’s Police Chief James C. Rovella, PAL Program Director Sergeant Louis Ruiz, Sgt. Steve Austin of the Special Operations Group, Sgt. Andrew Lawrence, officers Andrew Rodney and Jeff Valerie, who were present at the second session, along with the children who said that they did not know anything about the sport before.

Coordinator of the program George Steir, one of the five coaches who showed up, explained to the officers and the youngsters that the game is the second most popular in the world, and is a great way for children to learn to work together in a team environment while developing important physical and mental skills. 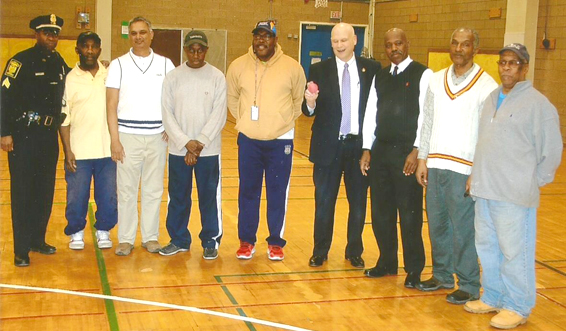 “Cricket develops a child’s mind, body and spirit, helping to lay the foundation for success as an adult. Cricket also provides a fun way for children of all ages to stay or get in shape by improving coordination, strength, speed, agility, flexibility and reflexes,” he told them.

Further Cricket increases concentration, the ability to think strategically and tactically to overcome an obstacle, to utilize decision-making skills, cultivates a sense of fair play, self control, integrity and respect for others. Cricket promotes discipline, self-assurance, and responsibility and provides positive interaction with peers and adults, he remarked in reply to some of the questions that were asked by some of the officers who were also learning about the sport for the first time.

The Hall of Fame’s mission is geared towards popularizing the sport of cricket in the region by reaching out to as many children as they can and to eventually promoting its adoption into the local schools, Steir added.“We will begin the training by using softball equipment indoors then channel the children toward appropriate training facilities and equipment outdoors. The best way to learn the game is to play it,” he told the excited youths.

After hearing the attributes of the game, Sgt. Austin explained how pleased he was for them to bring the program to PAL, which he said is geared to use sports to teach the youngsters the positive things in life in an effort to help them to turn out to become good citizens.

Cricket, one of the oldest bat and ball game in the world, which resembles baseball, also has catches, hits, innings and runs. Baseball is said to have actually come out of Cricket.

The game (Cricket) has been a part of the American history as early as the 17th century. Known as a British sport, the first reference of the game being played ‘abroad,’ was in 1676 by some Britishers who were residing in Aleppo, Syria.

In 1754, President Benjamin Franklyn brought back from England a copy of the 1744 laws of Cricket and in 1849, President Abraham Lincoln was a spectator when Chicago played Milwaukee.