Members of the Cricket Hall of Fame are mourning the loss of Andrew “Buster” Headley, who sadly passed away Sunday, April 19, 2015. He was 89. 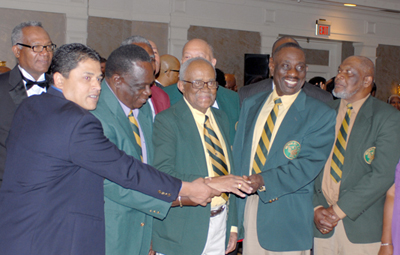 One who was admired for the outstanding contributions that he has given to the game in the U.S. Buster was honored with his induction into the Cricket Hall of Fame on Saturday, October 6, 2012.

Born in Boston, Massachusetts, Buster developed his love for the game while living in Jamaica where he had migrated in 1929 at an early age. On his return to the U.S. after graduation from high school in 1944, he was drafted into the navy where he served for two years in active duty and another 16 years in the Naval Reserve. He also worked with the U.S. Post Office for 37 years.

During these times, he played the game in between and served with the New York Cricket League (NCL) for many years attaining the position of Vice-President of the league.

In 1955, he was elected the first president of the newly formed Wembley Athletic Club and its first cricket captain. With his history of devotion to the ACL, as one of the founding fathers of the club, he was admired for his dedication and loyalty to the club and his support and contributions that he gave to the game over the years.

Members of the Cricket Hall of Fame offer their deepest sympathy and condolences to his family.