CWI President Cameron To Be Inducted Into Cricket Hall Of Fame

President of Cricket West Indies Inc. (CWI) Whycliffe Dave Cameron, will be the guest speaker at this year’s Cricket Hall of Fame’s Induction Ceremony, which is set for Saturday, October 6, at the Hilton Hotel in New York. Cameron, who was elected to the presidential post in 2013, will also be among the top of the class of inductees at the ceremony. 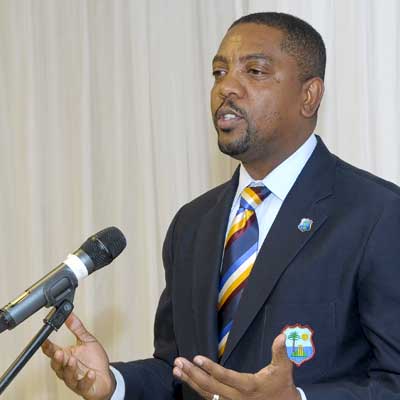 He will be joined by former West Indies cricket team’s captain Jimmy Adams, Leonard Chambers and a number of others who have made outstanding contributions to the sport in the U.S. like Richard Staple, Rudy Persaud, Trevor Walke, Byron Chambers, Curtis Clarke, Fitzroy Hayles and Shah Zafar of Canada.

Born on April 8, 1970, in 1982 while attending high school, he moved to the neighborhood of Kensington and Lucas Cricket Clubs in Kingston, Jamaica. This was the start of his passion and affinity for cricket. During those years he represented all the age group teams. At that time he was also selected to try out for the Jamaica Under-19 team, on two occasions, to get a chance to participate in the West Indies Regional U-19 Tournament.

Cameron graduated from Kingston College (High School) in 1989, and earned the Douglas Forrest Scholarship (sponsored by Frank Rance) for Hotel Management to pursue studies at the University of the West Indies (UWI) Nassau, Bahamas’ campus, where he earned a Bachelor’s Degree with First Class honors.

In 1998, he graduated from the UWI with a Master’s of Science Degree in Computer-based Management Information Systems. Upon completion of his studies, Cameron held professional positions at two of Jamaica’s premier luxury resorts on the North Coast, before changing his focus to finance. Over the years, he has worked his way up in finance to today being founder and CEO of Infiniti Capital Jamaica Ltd., a licensed securities dealer in Jamaica.

Despite his professional accomplishments and the demands of his career, Cameron’s love for cricket never wavered. In 1997, under his management, Kensington won Senior Cup and the inaugural County Championship, which marked the first semi-professional league in Jamaica. In 2000, he was asked to join the Jamaica Cricket Association as Assistant Treasurer and later as Treasurer. He has also been president of Kensington since 2001.

In May 2002, he was elected to the position of representative to West Indies Cricket Board (WICB). During his tenure, he chaired the Development, Marketing and Constitution Review Committee, among other ad hoc committees of the Board. In 2007 he was elected Vice President. In 2013, Cameron contested the position of president of the then WICB and won for the first time with a total of seven of the 12 votes. He was successful in being reelected to the Presidency in 2015, securing eight votes.

Currently Cameron serves as a member of the Development, Executive and Nominations Committees of the International Cricket Council (ICC). He is an avid sportsman, who represented Jamaica in the World Championships in Pistol Shooting in 2002. He regularly plays golf and tennis in his leisure time.

He is married to Connie Cameron, with whom he has four children.