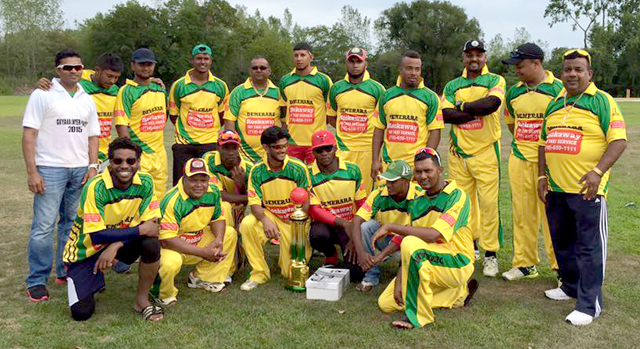 By Sam Sooppersaud | Scorecard
There is a tendency by some people to give up in the face of insurmountable odds, to simply give up; throw in the towel; to “let the pieces fall any-which-way.” A classic attitude or self-resignation and defeat. In essence, a self-defeatist attitude. Then there are others who resolve to, “see it to the end, the finish,” come what may! These are the ones who never say die. The true fighters, the adventurers. And history has shown that the “spoils go not to the swiftest, but to those that endure to the end”. To them, “It’s not over until it’s over”.  They are true fighters.

How applicable are the above phrases to the cricket squad representing Demerara County in the Guyana Inter-County T20 Tournament last Saturday, August 8, 2015, at the beautiful Idlewild Cricket Complex, in Rosedale, Queens, NY.  Though many times during the two-match contest they perceived themselves as David battling Goliath, they did not lose heart and “put down their weapons.” They fought on gallantly, and they are proud to say, successfully!

For those not aware, Guyana is comprised of three counties: Berbice, Demerara, and Essequibo. In the first game of the day’s cricket schedule, Demerara took on Essequibo for the right to book a berth in the Finals versus Berbice (the 2nd game). Berbice, by virtue of the fact that they were the 2014 Inter-Country Champions, were automatically elevated to the Finals.

Demerara took on Essequibo in the Semi-Finals. That contest commenced at 9:30AM, with Demerara taking the first knock. I got to the park when 11 overs had already been bowled. The score was then 4 for 84. Within the next four overs wickets began to fall like bowling pins. Demerara lost four wickets for the addition of only 24 runs. Two overs later they were all out for 115 runs. Demerara committed the cardinal Twenty20 sin of not being able to bat out their full complement of 20 overs.

The star of the Essequibo bowling squad was Shiv Raghubar, 3 for 20 in 3 overs. Accounting for the other wickets; Batson 2 for 24; Mark Tyrell, K. Edie, and K. Yadram snatched 1 wicket each for 11, 16, and 14 runs, respectively.

The Essequibo players and their supporters were elated. To get 116 runs for victory in 120 balls, was a walk in the park! Or, was it! Judging from the results of the game, it was certainly not that easy as they had perceived. Except for a 4th wicket partnership of 61 runs, the Essequibo batsmen were literally “going out to the middle, saying a ‘quick hello’ and heading back to their confines.”  The Demerara bowlers fought gallantly with some steady bowling. From a commanding position of 4 for 91 at the end of the 17th over, Essequibo crumbled; all out for 103 runs. Demerara had fought back and conquered the odds. Even in the face of impending defeat, the Demerara players were “upbeat.” They were talking to each other and had several “get together conferences” on the field. Togetherness, is what got them home, successfully.

Destroyer of the Essequibo lineup was Hemraj Chanderpaul, 3 for 14. Andre Kirton, Ramphal Bactowar, T. Henry, and W. Haslim claimed one wicket each. 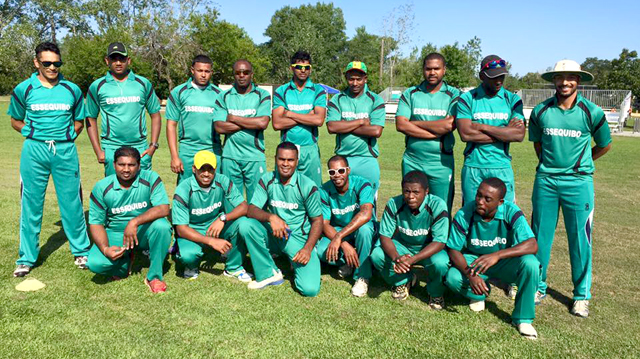 By virtue of the semi-finals win, Demerara met the reigning Guyana Inter-County champions Berbice. Oh, I should mention, a star-studded lineup. It was the general feeling around the park that Berbice would definitely come out on top, for the second year in a row. At least, this was the mindset of the Berbice supporters. I am sure that thought impinged on the minds of a few of the Berbice players. Hey, we are playing Twenty20 cricket, and anything is possible.

Skipper Karan Ganesh of Berbice won the coin toss and inserted Demerara to take first knock. The slow right-handed Ganesh opened the bowling and claimed two quick wickets, and with the run-out of another, Demerara were 3 for 23 at the end of the 4th over. Then came a damage-control stand of 66 runs between Randall Wilson (57) and Brian Sattaur (30). A fifth-wicket stand of 70 between Wilson and Hemraj Chanderpaul (52 not out) took Demerara to a defendable total of 165 runs, while losing six wickets. What resilience and stoicism by Demerara!  Karan Ganesh 2 for 14, Alex Amsterdam 2 for 33, and Dominique Rikhi 1 for 20 were the wicket takers.

Set a target of 166 runs for victory, the Berbician openers set about their task in a bellicose manner.  Moshin Khan (49) and Derek Narine (31) pounced on the Demerara opening bowlers.  The 50 runs mark came up in 4.2 overs. Then with the score on 52 Narine was deceived by a slower ball from T. Henry and offered an easy catch to Akeem Dodson behind the stumps. The Demerara players were happy to see the back of Narine, as he was dealing in 4’s and 6’s while at the wicket.

Berbice lost their second wicket (Richard Ramdeen 13) with the score on 95 at the end of the 9th over. From this commanding platform of 95 for 2 (70 to get in 66 balls), the remaining Berbice batsmen “rolled over,” or if you prefer, the Demerara bowlers “sent them packing.” In the space of the next 36 balls (6 overs) five Berbice batsmen were sent to the showers.  (Pardon the pun, they didn’t even break a sweat, so why the showers!)  It was then 133 for 7 wickets. The remaining three wickets fell for an additional 19 runs only. Berbice were short 13 runs. Demerara, through grit and determination wrestled the Guyana Inter-County Championship from the defending champions. A well-deserved accomplishment.

Destroyers of the powerful Berbice batting line up were: Andre Kirton 3 for 26, T. Henry 2 for 34, Hemraj Chanderpaul 2 for 16, and Ramphal Bactowar 1 for 39. Needless to say, the Demerara players, the support staff and their supporters celebrated the win with hugs and high fives.

At the presentation ceremony following the games, Mr. Bhola Ramsundar, Chairman of the Guyana Inter-County Committee thanked the fans and sponsors for their support in making this year’s tournament a success.  He was grateful to the players for providing cricket lovers with the exciting display of Twenty20 cricket.

Awards were presented as follows:
Semi-Finals:  Best Batsman – W. Haslim (60 runs) a pair of batting pads, and Best Bowler- H. Chanderpaul, 3 for 14, cricket shoes.
Finals: Best Batsman – Randall Wilson (57 runs) a pair of batting pads, Best Bowlers- Andre Kirton, 3 for 26, cricket shoes. A special award was made to Hemraj Chanderpaul for his entertaining innings of 52 runs which included 3×6’s and 5×4’s. He received a cricket bat.

The Champions, Demerara received the trophy and the $3000 First Prize, Berbice, the second place trophy and $1500, Essequibo, $500.

It was an exciting day of Twenty20 cricket and the fans had a great time.