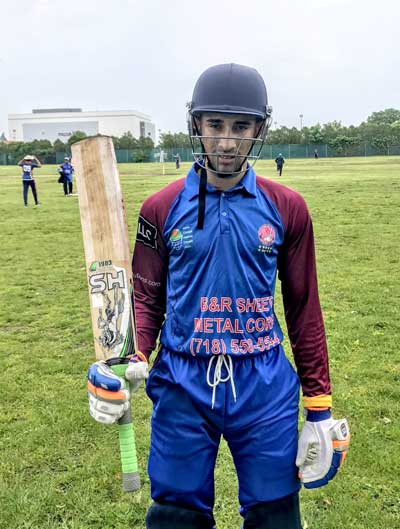 Dominique Rikhi scored a brilliant 116 opening the batting for RHLCC.

The coin landed in favor of VCC as the Long Island club hosted it’s second match at their new home ground in Hicksville. With rain forecasted for later in the day RHLCC was asked to bat first. Rikhi and Altaaf Habibulla took strike but the visitors lost Habibulla early.

Rikhi was joined by inform man, Wahid Ward as the two set out to lay the foundation of the RHLCC inning. Wasting no time Ward struck a brisk 36 which included four sixes and a four before he mistimed a pull to the leg side.

Rikhi meanwhile, expertly negotiated the uneven bounce of the newly laid wicket at Hicksville. He combined his watchful defense of the well-lined balls with his typical timing of bad balls to the boundaries.  He would lose another partner, Danesh Deonarain, at the stroke of the 15-over drinks break with the score at 96.

Joined by his captain, Carmichael, Rikhi quickly brought up his half century off 48 balls hitting his fourth boundary to complement two sixes. With the overcast skies leading up to the match turning into a steady drizzle, Carmichael got his inning up and running to as the two settled into the VCC attack.

Rikhi would bring up his century hitting five more boundaries and two additional sixes. In doing so he also brought up the pair’s 100 runs partnership. Carmichael getting into the action struck three fours and brought up his half-century with his second six.  Both batsmen would fall in the closing overs of the innings with Rikhi finishing on 116 and Carmichael 53. Inzy Khan played a handsome hand in the closing overs for an unbeaten 29 as #TheBlueNation posted an imposing 292 for 9 off their 40 overs. 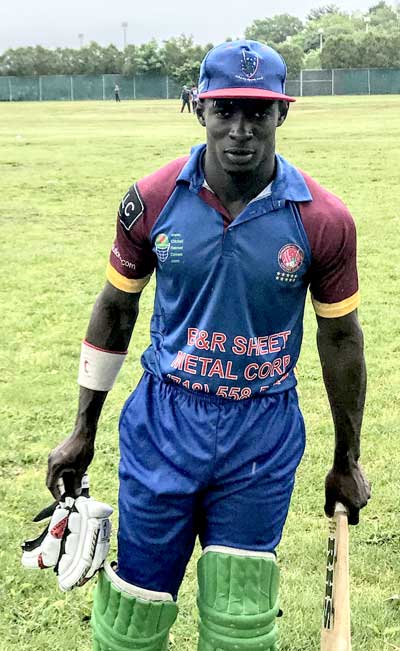 Trinson Carmichael struck 53 and returned to pick up 4 wickets for 21 runs.

Bowling for VCC Abhishek Jasthi picked up 3 for 60 while Daniel Bula and Avinash Matchitti picked up two wickets each and there was one a piece for Sudeep Kanwal and Harleem Singh.

With a damp outfield and a towering chase VCC set out to defend their home advantage and did so aggressively taking 8 off the first over and four off the second. Jamiel Jackman, who has been in good form with the new ball answered in the third over, however, bowling Matchitti for 10.

Jackman bowled with pace and was unfortunate to not scalp more wickets in his 6 over spell. His opening partner, Carmichael, shredded through the VCC middle order picking up 3 wickets in four balls in the 8th over of the match. Top scorer Karthik Yenumula (16) was the first to go in the triple strike which left VCC’s chase in tatters at 32 for 4.

Batting did not get easier when Leon Mohabir was introduced into the attack. The 2016 league leading spinner sent down 3 overs for 7 runs and picked up 3 quick wickets to help wrap up the VCC lower order. Carmichael picked up one more wicket to finish with a spell of 4 for 21 off 8 overs. Moien Khan like his fellow pace bowler Jackman send down an economical 2 over spell for just 4 runs while part timer Deonarain picked up the final wicket to wrap up the VCC inning at 62 all out.

The win puts Richmond Hill Liberty Cricket Club at a record of 3 wins, 1 no-result and 0 losses as the boys in maroon and blue head back to their home ground, The Cricket Cage at Baisley Pond Park in Queens, NY where they will do battle with Falcons Cricket Club this Sunday.