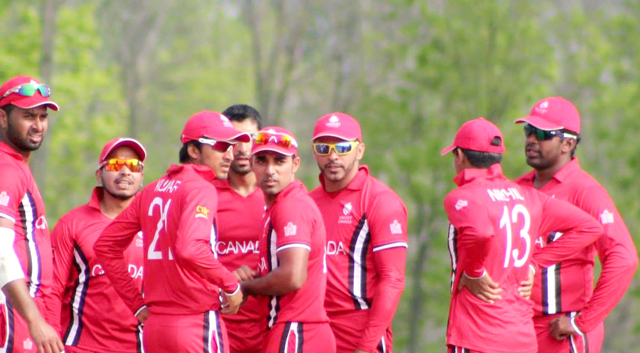 Canada during the ICC Americas Division 1 tournament which was recently held in USA. Photo Ali Ebrahim

He made this declaration on Sunday as Canada set to begin their campaign on Thursday against Kenya. The qualifying tournament is hosted jointly by Scotland and Ireland and will run for 18 days.

Of the 14 participating teams, six will join the other 10 full-member ICC countries at the mega event from March 11 to April 3. Apart from his optimism, Katchay spoke enthusiastically. 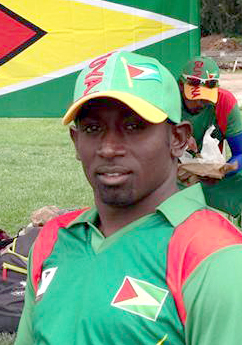 “This [is] a great chance for Canada to qualify, they did well in USA recently at the first qualifying tournament so I think they are more ready and prepared to reach at T20 World Cup in 2016,” the medium-pace bowler and right-handed batsman, related.

He is also very confident that this bunch of players is talented and capable of making Canada proud to advance and be part of the World Cup showdown.

“I know this is a very good team and can do well over there; once they play to their true potential, Canada should be in the top four; the side very talented, they got experience and they are playing good cricket as well,” the former Guyana first-class cricketer stated.

Since the inauguration of the ICC T20 World Cup in 2007 (South Africa), Canada have never featured having suffered elimination at the Qualifier competition but Katchay hangs high hopes of them making their debut on this occasion.

“Preparations are very important and what I have seen over the past two months in the team, they have looked prepared both mentally and physically to take up the challenge now; however, I still think when preparing for these kind of big tournament, you have got to play more practice games and give the players more exposure on turf pitches because we don’t play as much cricket here,” Katchay expressed.

Seasoned campaigner and skipper Rizwan Cheema will lead the side and his experience and ability is always a great asset for Canada particularly in this limited-over version.

Additionally, players like opener Ruvindu Gunasekera, Hiral Patel, Cheema, Jimmy Hansra, fast-bowler Jeremy Gordon among others have done well for Canada on the big stage and they should take up the responsibilities again, according to Katchay, who still plays Elite cricket in Toronto representing Civics Cricket Club.

For many it was a shame for where Canada’s cricket has gone generally to relegating to Division Three despite qualified for the 50-over World Cup tournaments in 1979, 2003, 2007 and 2011.

After failing to qualify for the 2015 event in New Zealand and Australia, Cricket Canada lost their final support from ICC as well.

Meanwhile, the absence of young and talented all-rounder Nikhil Dutta is a huge blow for the team. The 20-year-old Dutta currently in the West Indies representing St. Kitts and Nevis Patriots at the Caribbean Premier League T20 tournament.

“Obviously, he is a quality player and definitely he would have been a good player to be at this qualifier competition; his all-round game is needed here for Canada and the conditions in Scotland and Ireland would have been ideal for him, but as I said still a good side to compete and make it to the top six,” Katchay, who played for Canada in all formats, mentioned.

Canada has been placed in Group B alongside Afghanistan, the United Arab Emirates, the Netherlands, Scotland, Kenya and Oman. The other Group is comprised of defending champion Ireland, Nepal, Hong Kong, Jersey Papua New Guinea, Namibia and United States of America.