By Sam Sooppersaud | Scorecard
Despite a gallant inning from Sudesh Dhaniram, the Bleachers Masters fell short to Everest Masters, when the two cricketing giants in the New York Masters Cricket League met in the Finals, on Saturday, September 24, 2016, at the Idlewild Cricket Complex in Rosedale, New York.

In excess of three hundred cricket fans were on hand to witness a classic display of batsmanship by Danny, as he is fondly called by his friends. His was such an exciting inning that numerous spectators remarked that it brought back memories of his exploits with the bat as a young(er) man. He scored 127 runs, which included 13 boundaries and seven maximums. All bowlers were treated with disdain as he wielded his willow in the middle. He did not, however, get the support from the other batsmen on his team, hence his ton was an in vain effort.

Bleachers took first knock. They were reeling at 17 for 2 in just the fourth over when Dhaniram got together in a third-wicket partnership with Dixit Palmer. The two put on 76 runs before Palmer (15) was caught off the bowling of Zamin Amin. Of the 76 runs partnership, Dhaniram scored 56. He was that dominating! The only other batsman who contributed a significant score was Quayaam Farook, who was 32 not out at the end of the inning. Derek Kallicharran (16) John Sylvester (13) and Darrell Roopchand (10) were the other batsmen to reach double figures. The Bleachers innings ended at 236 for 7 wickets.

The wickets were shared among the Everest bowlers: David Mohamed 2 for 55; Trevor Walke, Vijay Seonarine, Zamin Amin, and Sohan Das, each took a sole wicket for 16, 31, 48, and 43 runs respectively.

The Everest Masters sent out Debo Sankar and Shahid Shahzad to open their batting. The two batted watchfully, taking painstaking care to preserve their wickets; 19 runs were scored by the end of the fifth, with four of those being extras. Eventually, once settled in, the two began playing more freely.  The scoreboard kept ticking. With the score on 75 and in the 15th over, Sankar, on 35, premeditatedly stepped out of his crease to drive a ball from Derek Kallicharran. His missed the ball completely, and wicketkeeper Charles Walker collected the ball and whipped off the bails before the batsman could regain his ground. 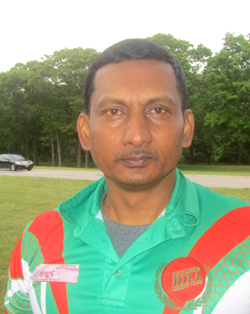 Amjad Khan, a hard-hitting batsman walked to the wicket. (He is one of only two batsmen to have scored a triple century in the USA). By this time Shahzad was creaming the ball to all parts of the field. Together, the pair put on 85 runs for the second-wicket partnership, before Shahzad (78) was adjudged LBW to a quicker ball from Dixit Palmer. The departure of Shahzad, however, did not spell RELIEF for the Bleachers. The fourth man in, Vijay Seonarine, was in a hurry to finish the game. His first runs came via a maximum, followed by two boundaries.

Amjad Khan, by this time was striking the ball mercilessly to all parts of the playing field.  He was finally caught on the deep long-off boundary by Darrell Roopchand, attempting yet another big hit. He made a hard-hitting 47 runs. The pair put on 32 runs for the third-wicket partnership.  Mr. Dependable Zamin Amin, joined Seonarine with the score on 192 for 3. Together they brought the game home for their club. Seonarine was not out on 36, and Amin was not out on 16. Final score – Everest 237 for 3 in 33.4 overs, and the victory.

The Bleachers Masters employed eight bowlers to dislodge the Everest batsmen, however, only Dixit Palmer 2 for 42 and Derek Kallicharran 1 for 28, were able to get any success with the ball.

The Everest Masters and the Bleachers Masters have a friendly rivalry between them. Numerous times in the past years they have competed in the semi-finals. Bleachers have consistently denied Everest the privilege of advancing to the finals. Once again, in 2015, Bleachers knocked off Everest in the semi-finals and earned their spot on the finals. The other finalist, Lions King, forfeited. Bleachers became the champion through the default of Lions King.

In wresting away the championship from Bleachers, Everest can say they have exacted some revenge (friendly, of course) from Bleachers, for keeping them out of the finals for so many years.

The fans came out to see good cricket. They saw an exciting game. They were treated to some exquisite shots from some of the more talented batsmen in the New York metropolitan area.

Congratulations to the Everest Masters. You have earned your trophy. Let the champagne flow!