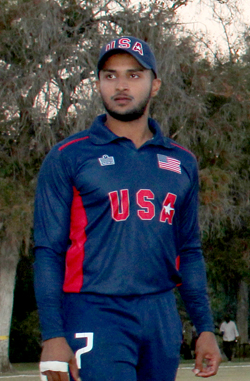 Following ICC Americas clash with Jamaica in the WICB Regional Super50 on Wednesday, Feb. 1st, opening batsman Fahad Babar has left the squad and returned home to Chicago upon concerns and legal advice his family has received following recent changes to US immigration policy.

The policy which is an executive order issued by USA president Donald Trump is, imposing a 120-day suspension of the refugee program and a 90-day ban on travel to the U.S. from citizens of seven terror hot spots: Iraq, Iran, Syria, Libya, Yemen, Somalia and Sudan.

Babar who is a Green Card holder came to the USA at the age of 14 from Pakistan and has represented the USA on a few occasions.

Ali Khan and Akeem Dodson are the two other Muslim players currently with the team who are USA citizens.

Babar, who had scores of 24 and 5 in the WICB 50-over competition to date, opened the batting in the USA’s recent successful World Cricket League Division 4 event and has been a member of the USA squad for over 4 years.