Players warm during the assessment which was held in September. Photo by Shiek Mohamed

By Ravendra Madholall in Toronto
Hall of famer Davis Joseph is strongly backing the International Cricket Council (ICC) Americas team to come good when they make their inaugural appearance at the 2016 West Indies Cricket Board (WICB) Super50 tournament.

The former Canadian fast-bowler has expressed profound optimism that this will be a great opportunity for these players to exhibit their natural talent in a limited-over competition of this magnitude.

Defending champion Trinidad and Tobago Red Force will be hosting the mega, regional eight-team series, commencing from January 7 to 25 and the North America combination will be vying for supremacy in Zone A alongside Red Force, Barbados Pride and Combined Campuses and Colleges Marooners. 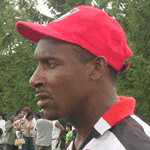 “I think this [is] great way to help develop the game in North America; having players from Canada and United States of America (USA) together representing one side is a great idea by ICC and I am confident they could do well,” the right-arm bowler related.

Six players from Canada have been selected while two players from the just stated country are placed on the reserved list. According to Joseph, who featured for Canada in all versions for 16 consecutive years, these players have the ability to perform well and simultaneously their participation should help Canada’s cricket in some meaningful ways.

“As I said, it is a great idea and I know these cricketers are eager to represent their respective countries wholeheartedly; a wonderful chance like this should motivate and give them confidence to make an impact when playing for Canada or America on future tours,” Joseph, a 2003 ICC 50-over World Cup player, commented.

In early September, some 90 players were assessed to take part in phase 1 and 2 in Indianapolis under the watchful eyes of former and legendary West Indies fast-bowler Courtney Walsh.

Players were invited from USA, Canada, Bermuda, Suriname, Argentina and Cayman Islands via an application process before they were summoned to trials.

At global participation and Canada in particular continued to be the underdog team and with the consistent connotation of being the whipping boys, Joseph believes that hard and conscientious efforts from Cricket Canada can make a difference.

“I think an approach like this to promote the game by lifting their standard and try to get your best team to take part in the WICB tournament, you definitely will want a great team and looking back the way they started, I think the selection was good,” Joseph explained.

Individually, both USA and Canada participated in the annual regional tourney on different occasions but with limited success while the two countries have failed at the Qualifiers over the past two years for ICC T20 and 50-over world cup competitions.

“We can put that as history, and look more keenly now to improve our game; regional cricket is very challenging and you have got traditional powerhouse teams competing, so it will be a tough assignment for them,” Joseph, who is a native of Grenada, divulged.