Spectators at the day’s games.

Idlewild Cricket Ground was ablaze with colors, commentary, and cricket last Saturday, as the Rockaway Group of Companies sponsored Rockaway T20 New York Cricket Fiesta tournament now in its second year, entered the fourth round. With a triple header slated from 9:00am, it was guaranteed to be a scorcher on or off the field in 86+ degree heat.

BANGLADESH vs. JAMAICA
The first fixture saw the winless Bangladesh taking on the 1-0 Jamaica. With a very dominating line up, Jamaica did not need eleven players to make Bangladesh remain winless, but winless they remained after winning the toss and agreeing to occupy the middle first. In hindsight, it may not have been the wisest of decisions, despite the overnight rain and a wet outfield. Jamaica was three players short at the toss. 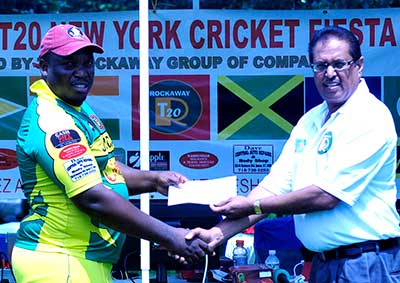 Jamaica accepted the invitation to occupy the middle first and posted 154 for 3 in their 20 overs. The Jamaican batsmen hit eight maximums as they sought to dominate the Bangladesh bowlers. Former Jamaica national captain and West Indies’ Tamar Lambert led the brigade with 47 (3x6s, 2x4s) off 34 deliveries, before he was bowled by Fayzal Ahmad. O’Neil Powell, 42 (3x6s, 3x4s), Tristan Coleman, 36, (1×6, 4x4s) and Barrington Bartley, 21 not out, all enjoyed knocks ahead of the ball count. Everton Nelson was 8 not out, including one maximum. The Jamaica wickets fell at 59, 84 and 146, and were shared by Hasib Imrul (2) and Fayzal Ahmad (1), as Bangladesh used seven bowlers in their effort to dislodge the hard-hitting Jamaican batsmen. The Bangladesh bowlers bowled exceptionally disciplined, giving up a solitary wide as the only extra, and not until the 18th over of the inning.

Bowling for Jamaica: C. Senior 2 for 20; D. Morgan 2 for 24, B. Bartley 2 for 30 and E. Nelson and B. Blackwood one apiece, for 45 and 25 respectively. The score does not reflect how close Jamaica came to losing the match, as the Bangladesh team kept nibbling away at the target.

INDIA vs. BANGLADESH
In the middle fixture of the day, Bangladesh faced India and posted 121 all out in 18.5 overs after a disastrous start of 32 for 3. Following the earlier defeat at the hands of Jamaica, Bangladesh and India were both desperately seeking to get on the points-standing board of the tournament. However, it was not to be Bangladesh’s day, as India climbed to 125 for 5 in 17.3 overs and the victory. 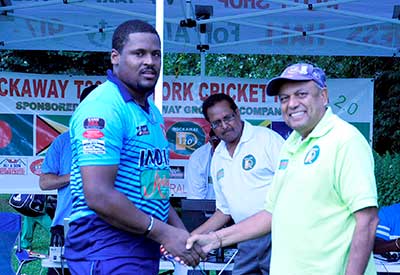 GUYANA vs. NEW YORK SELECT XI
The much anticipated encounter between Guyana and the New York Select XI kicked off late in the afternoon, as the tournament committee looked to complete yet another triple-header in the 2017 tournament.

The New York Select XI got off to a blazing start with Wahid Ward taking it to the Guyana bowlers with Rockaway T20 maximums, as the team racked up 32 off the first three overs. Ward was responsible for 28 of the first 30 runs scored in the three overs that yielded 32 runs, before his opening partner Muneshwar Patandin was caught by Mark Tyrell off the bowling of Keon Lake, without scoring. Wahid Ward’s 37 came off 28 balls (4x6s, 2x4s). The batsman had gotten the Idlewild crowd to its feet, as he seemed hell bent on scoring a ton in record time. However, he would soon fall to off-spinner Keon Lake. The crafty bowler rearranged Ward’s furniture just after he had lifted the bowler for a Rockaway T20 maximum to backward point. The score was then 51 for 2. Lake would go on to snatch the top three New York XI wickets for 17 runs (Patandin, 0, Ward, 37 and Jamal Hinckson, 11). 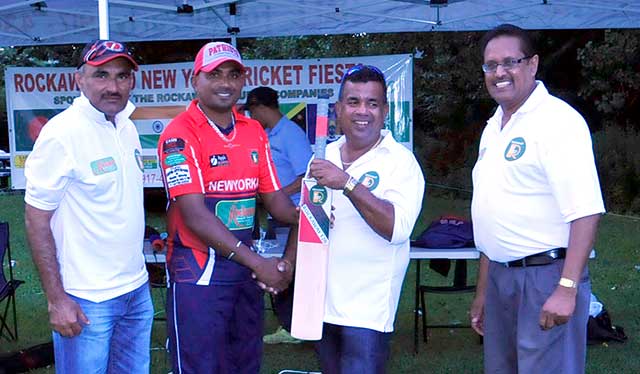 At this point the spectators had gotten a little bit of everything they had expected. Maximums, wickets, excellent fielding, and astute captaincy; then it started to fall apart, as New York lost wickets at the 52, 55 and 56 run marks. New York did not add much value to its inning and the hype, until Zaheer Mohamed batting at eight exploded with shock and awe, dropping bombs in and around the former airport site. The batsman got New York back into the game hitting an unbeaten 74 off 43 deliveries (7x6s, 3x4s). Daveshwari Prasad enjoyed a cameo walk on role contributing 11 before being run-out.

The New York inning was a roller coaster with very, very highs and some very, very lows. Did Guyana take its foot off the gas? No, New York simply has batting all the way to the bottom, and without the services of its skipper Karan Ganesh, now on the disabled list with a hand injury.

Having posted 164 for 9, the very excited crowd noted that a victory by either team would be a win for Guyana cricket, as both teams are laden with Guyanese cricketing talent. The battle was now on for the soul of Guyana, as the representative Guyana XI took to the middle in hopes of adding to their 1-2 record.

Looking to defend a par score of 164, Guyana was off to an inauspicious start losing its first six wickets for less than 40 runs. A paying audience might have started leaving the stadium, having paid good money based on the hype, but those at the park had nothing to lose by staying to see how badly the Guyana team would be beaten, or if it had the same depth of batting talent as the New York XI, to rise again like a Phoenix from the ashes. Only conservative bets would have exchanged hands, as Guyana folded its camp with a whimper at 96, far short of the target for victory. Three batsmen reached double figures as the New York bowlers staunchly defended the scraped together 164 posted earlier. Guyana skipper Andre Kirton, 33, (3x6s) and batting at number seven struggled to hold the inning together and to get some traction, but he ran out of partners, except for Matthew Marques with 22 (1×6) and an earlier contribution from opener Gajanand Singh, 21 (2x6s, 1×4). All the other Guyana batsmen only showed up briefly and contributed single digits or none at all. 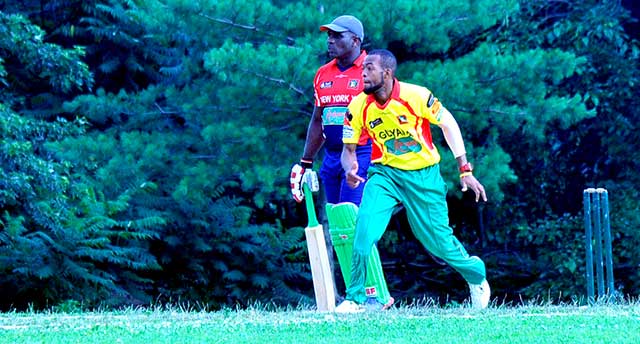 New York, New York, it’s so nice they named it twice! However, the New York Select XI was in an uproar and moved up to four and zero in the tournament standings. Sitting pretty atop the Empire State and peering down at Pakistan 2-1, Jamaica 2-1, Guyana 1-2, India 1-2 and Bangladesh 0-4. Not a bad view for the New York Select XI moving into the next round. All other teams with the exception of Bangladesh have played only three matches, so far.

The action resumes on Saturday, July 29, with another triple-header, this time at Baisley Pond Park at 150th Street and Baisley Boulevard, In Queens, NY. Bangladesh takes on New York Select XI at 9:00 AM, Pakistan meets Jamaica for lunch at Noon, and India faces off against Pakistan at 3:00 PM.