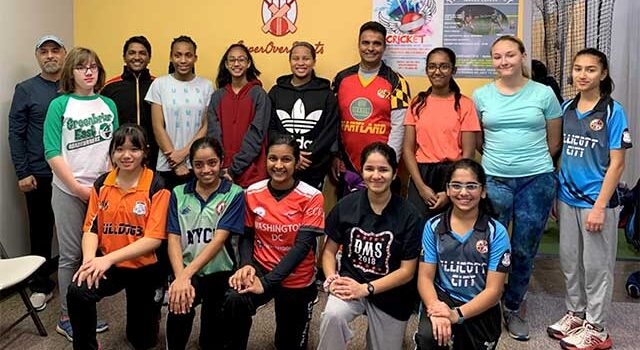 Girls From Maryland And Virginia Hoping To Impress National Selectors

On Saturday, February 22, USA Cricket officials and selectors will be in Maryland scouting for talented female cricketers. USA Cricket is looking to establish a women’s and a girls’ national player pool. This will be the first step in getting more girls and women on track for selection to the USA National Women’s Cricket Team. Here is the official announcement at the USA Cricket website: https://www.usacricket.org/media-release/usa-cricket-announces-upcoming-talent-identification-events-for-women-and-girls/

The MD/VA girls will be attending this event to showcase their talent, developed over years as they rose through the Maryland player pathway.

Nearly all these girls started off playing cricket for their school cricket teams in the BEST and WAMS Cricket Leagues. The school leagues are for beginners and experienced players. Tennis balls covered with electrical tape are used for safety reasons. No protective gear is required when batting. The BEST and WAMS Cricket Leagues have been a huge success with more than a thousand boys and girls being introduced to cricket over the past few years. And many of them and their parents knew nothing about the game previously.

As the girls got better, they moved on to the more competitive coed travel teams to play in the state championship competition. The 11U age group is the intermediate level, where the vinyl ball is used. This ball looks like a real cricket ball but is much lighter. Batters wear partial protective gear. At the 12U, 14U, and 17U levels, the hard, leather, cricket ball is used, and batters wear the full protective gear.

MYCA also has an all-girls division with the taped tennis ball for beginners and intermediate level players. The state competition grows every year, and in 2020 there will be 45 youth teams from Maryland and Virginia playing in the various age groups.

Memorial Day and Labor Day weekend youth tournaments hosted by the Washington Cricket League and Future Stars School of Cricket (FSSC) have raised the level of play for the boys and girls in the metropolitan Washington DC region. Competing against players from other states gives them a measure of where they are and where they need to get.

The MD/VA girls also traveled to North Carolina to participate in the top youth cricket tournament in the USA, the National Youth Cricket League (NYCL). In 2019, the NYCL upped their game by introducing the National Women’s Cricket League with four teams participating. The girls also travelled to Florida to play in the Girls Cricket League. Playing against other girls and women from around the country truly was a boost for the MD/VA girls to continue playing cricket and increased their drive to do better.

The crowning achievement for youth cricket in the region was when a homegrown talent, Lisa Ramjit, made it to the USA National Women’s Cricket team at the age of 14 in 2019. Lisa has proven herself to be one of the top bowlers on Team USA during international play. Lisa got her start in the BEST and WAMS leagues and in the MYCA statewide league playing for Bowie. She also traveled with FSSC to participate in tournaments around the country before being selected for the Maryland 14U state team. That experience over seven years, along with fine tuning from Coach Sunny Sohal, a former USA Men’s National team player, prepared Lisa to do well at the national level.

Lisa was the first girl from Maryland to make it to the national team, but there will be many more to follow. The structure and programs are already in place in Maryland to take a girl from not knowing anything about cricket all the way to the USA National Women’s Cricket Team. Many other girls have already started the journey and are prepared to take the next step on Saturday.