Some of the participants.

To get more girls playing cricket, the Maryland Youth Cricket Association (MYCA) and the Bowie Boys and Girls Club (BBGC) held a 2-Day tournament for girls over the Memorial Day weekend at Rockledge Elementary School in Bowie, Maryland.

This year, out of the 330 players participating in the BBGC’s elementary and middle school cricket leagues, there were 84 girls playing for their school teams. Some girls are among the top performers in the entire league. For example, Rosa Blanco’s 95 runs for Hollywood Elementary School was the 4th highest total in the BEST Cricket League, and Lisa Ramjit’s 9 wickets for Greenbelt Middle School was the highest in the WAMS Cricket League.

Even though it was a holiday weekend and some girls had already made plans to go out of town, 26 girls participated in the tournament and 5 of them were totally new to the sport. Since some girls did not show up, the moms were asked to form the 4th team of 8 players. Some moms were a little skeptical at first, but they were all glad they did.

It was truly amazing and a delight to see how much fun the girls and the moms had playing cricket. On Saturday, all 4 teams played each other one time. The matches were 8 overs per team, and each one took about 1 hour. The majority of the girls were used to playing with boys in the school league. At the tournament, the girls performed with more confidence elevating their skill level in the process. A prime example was Stephie Janey, who was part of the 2017 BEST Cricket League Gold Division championship team from Whitehall. During her school matches, Stephie would stand at the bowler’s end and lob the ball to the batsman. She would be very hesitant to field the ball when it came to her, and she would look nervous when batting. But not during the girls tournament. She ran-up to bowl and bowled out a few talented girl players. She ran more than 10 yards to catch a ball that was hit in the air. Coach Julia Chotoo, Stephie’s Whitehall coach, could not believe her eyes and had to look twice to make sure it was the same girl. 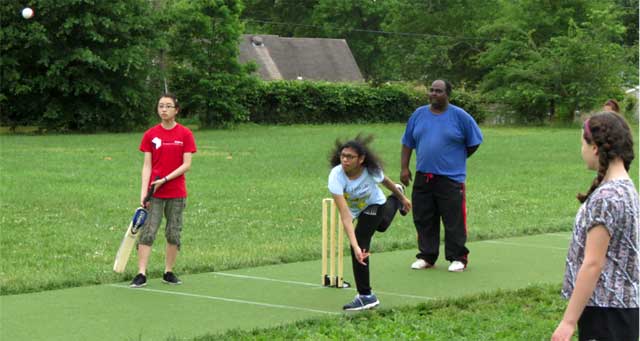 Most of the girls did not know each other, but they instantly formed bonds of friendship when they were assigned to the same team. On Sunday, the organizers tried forming new teams, but all the girls strongly objected because they wanted to continue playing with their teammates from the day before. Each team played one warm-up match on Sunday. By the time that game ended, most of the moms wanted a break. So the 3rd place team was divided between the other two teams. All the girls then played in the championship game while the moms watched from the comfort of their chairs. It rained for the last 30 mins of the game, but that did not deter the girls one bit from finishing the game.

There was a definite improvement in the girls’ performance over the 2-day period. The girls played 5 one-hour matches, not including the practice time in between. Umpire Roy Fernando noticed how Marissa Reiss and Brooke Sharp started off slow, but then started hitting sixes and fours and bowling out players. Roy nominated both girls as MVP’s for their teams in the championship game.

The watchword for this girls cricket tournament was FUN. And fun was clearly visible over the 2 days of cricket. The friendly rivalries between moms and daughters also kept everyone entertained. By the second day, the moms really started getting the hang of cricket and making nice shots for fours and sixes.

The guest of honor at the tournament was Mrs Doris Francis, former player for the West Indies Women’s Cricket team and former captain of the USA National Women’s Cricket Team. Mrs Francis was impressed with the excitement and enthusiasm the girls and the moms had for the game. She also plans to help with the girls program as we move forward.
This event was just the start.

Next Steps: Over the summer, the BBGC and MYCA will be hosting summer cricket programs for girls to continue playing together and for new girls to learn the game. We are planning to have sessions in Bowie, College Park, Linthicum Ferndale, and Ellicott City.

In the fall, we will have the first all-girl cricket league in the USA. Matches will be played on weekends starting September 16.

If you would like to get more information, please send an email to cricket@bbgc.com.