Global’s Planned Investment Is Better Than None

By Orin Davidson
A plan, even without specifics is encouraging for the finance -strapped United States of America Cricket Association. 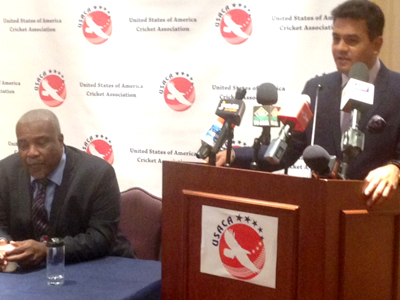 But the Philadelphia- based real estate businessman was only prepared to express his desire to see change for the better without any confirmation of  a date for the implementation of his initial US $70 million 15-year investment plan or whether an agreement was inked with the country’s official ruling body, following his invitation to media entities and stakeholders to the high- profile Marriot Marquis Hotel in Manhattan’s Times Square, last Thursday.

Unlike almost everyone else  present though,  Gladstone Dainty, the embattled USACA president was excited to announce  that  his association will have an infusion of  at least US $3.5m initially annually,  for the next 15 years, as a major component of the US $70m investment,  that will usher in a new era of contracted full time national team players and better Regional league competitions.

Given Dainty’s acrimonious relationship with the International Cricket Council (ICC), that resulted in years of  meager funding  and now another suspension, the amount is much more than any  the association has received from the ICC during  his  long 12-year plus tenure at the helm,  when the national men’s team has struggled  to emerge from the doldrums of  low division ranked status among ICC Associate nations.

In reality though, $3.5 yearly is pittance  compared to the  requirements needed  to fully transform United States domestic cricket from a past time activity for young enthusiastic  players and others whose priorities are to their  day jobs, to  professional or semi–professional status.

Full professionalizing of the sport, where every player representing teams is paid in an annual season of round robin competitions, require many millions more.

Nevertheless, contracts for players is a start in the right direction even if in his opening remarks Dainty did not declare the value, nor did   his financier.  It would guarantee full time attention to training and competition, which promising junior players in recent years could not risk and thus forced to quit the sport to pursue college to launch guarantee careers for life.

However, full time national players and assistance to the many league competitions around the country of which the plan is supposed to help, will not make United States cricket much better than it is presently.

A strong domestic league comprising teams representing the Regions which make up the national championships format of past years, in a professional setting is a major requirement to form the foundation for the big upgrade in standards.

And it would require much more than one enthusiastic businessman, rather dozens would be needed to finance every participating Regional team.

A  T20 professional league of which Pandya was forced to reveal as part of his plan, towards the end of his interaction with the media will help, but unless it is geared primarily to benefit the development of United States players and is in support to a 50 overs type competition of the design stated above, development will not be guaranteed.

Pandya stated his decision to invest was inspired by a question from his son while returning home from the last 50 overs World Cup in Australia and New Zealand.. “Why not us.” he said he was asked after his son noted the absence of the U.S team there.

The reality is that humongous support from the many companies in corporate America, which Pandya  described   as having  the “highest ” market potential in the world,  is the only way   the Stars and Stripes will fly at any World Cup in the future.

On top of everything else, the cooperation of the ICC will be a must as USACA’s current suspension from administrating the game here by the world body,  has to be lifted sooner rather than later.

Such optimism and more is needed for the current plan not to follow the failed paths of types in past years.