This year’s Massachusetts State Cricket League’s (MSCL) Boston T20 concluded on Saturday, October 15. Organized in the fall, the Boston T20 tournament is now in its second successful year of the tournament where eight of the best of the best teams within MSCL participates to grab the title. 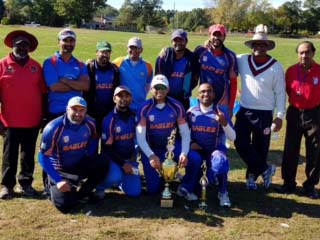 This year’s Boston T20 final was played between Golden Eagles and the Guyana Jaguars at Wrentham, MA. Golden Eagles captain Raghunandan Sridhar won the toss and elected to field.

Guyana Jaguars’ opening batsman Sharaz Baksh made his intention pretty clear from ball one, however in his effort to score quick runs Sharaz fell prey to Nitin Mewada, trying to flick over short-leg where he was caught by Jack Patel. Guyana kept on losing wickets at regular intervals. Arlind Hinds subsequently took control and shared a 50-run partnership with P. Doodnauth.

Golden Eagles captain sensed the dangers of a tailored inning and introduced himself into the attack, a decision he will not regret. He slowed down the run rate and knocked out Arlind Hinds and P. Doodnauth, both in the same over. Hinds was caught on mid-off by R. Chelikani and P. Doodnauth on point by R. Donepudi. This made way for the dangerous batsman Lakhram Sanichar aka Tarzan. Tarzan wasted no time and made his appearance felt, scoring a fiery 26 off 12 balls which included two massive sixes. 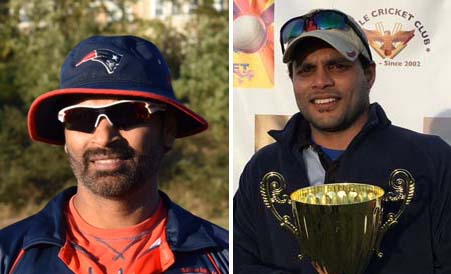 Golden Eagles started their innings with Rohith Reddy and Kiran Nataraj. L. Sanichar took one of the best catches of the series diving to his right at midwicket in Joginder Saini’s fourth delivery of the first over, which sent back the in-form batsman K. Nataraj.

Fazal Alam walked in to replace Kiran. Fazal couldn’t connect a couple of deliveries in the beginning, but it did not take too long for an experienced campaigner like F. Alam to get his rhythm going.

Rohith Reddy on the other end looked dangerous right from the first ball he faced. R. Reddy and F. Alam had a good thing going and did not play any risky shots. They converted ones into twos, and punished the bad deliveries. R Reddy moved into the fast lane from the 7th over.

It appeared as though the youngster was in a rush, as he scorched two sixes out of the park, while showing no mercy to O. Ramlochan, one of the well-known spinners in the league.

From this point onward runs were pouring in from both ends. R. Reddy and F. Alam put up a 113 run partnership before R. Reddy retired. Alam took the charge from Rohith and kept the momentum going making sure Golden Eagles crossed the finish line without further damage.