Guyana And Pakistan Off And Running

By Sam Sooppersaud
Cricket fans turned out in the hundreds at Baisley Pond Park cricket field in Queens on Saturday, June 11, 2016, to witness the inaugural games in the Rockaway T20 NY Cricket Fiesta. The tournament is sponsored by Mr. Hafeez Ali of The Rockaway Group of Companies and co-sponsored by other businesses and individuals in the New York cricket fraternity. 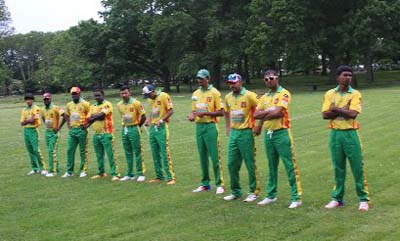 Since around 8:00 am in the morning, Hafeez and other members of the tournament’s steering committee turned up at the park to make the necessary preparations. Those in attendance were Ralph Tamesh, Tournament Committee Chairman, Zamin Amin, Rules and Scheduling, Joe Sieharak, Ajit Mootoo, and Bhola Ramsundar, Event Coordinators. This writer, also a part of the committee, was not able to be there at that time due to personal business. He did his part however, filling in as the Official Ball by Ball commentator of the games.

From the previous day it appeared as though Mother Nature would put a damper on the start of the tournament, with heavy rains predicted along with strong winds. Looking up into the skies one had the feeling that cricket would surely lose out. But, the Good Lady (Mother Nature) smiled on us and gave us excellent cricket weather, although a few drizzles were felt, the games were not affected.

The first of the two games scheduled for the day, commenced at precisely 10:00 am. That was important, as bad weather was impending. Bangladesh took on their South Asian neighbor Pakistan. (At one time in history, Bangladesh was a part of Pakistan).

Pakistan took first strike and immediately got into trouble, losing quick wickets. It appeared at one stage that they may not even attain a score into the 90’s. However, some lusty late hitting propelled them to a score of 121 in their 20 overs. 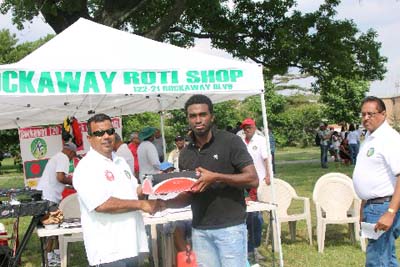 Michael Noble (right) collects this man-of-the-match award after capturing 5 for 14.

Bangladesh in reply, walked the same path as the Pakistani batsmen. Wickets tumbled in quick succession, as no Bangladeshi batsman was able to offer any resistance. They were eventually bundled out for 51 runs. Pakistan was on the points charts. The destroyer of the Bangladesh innings was Amad Bilal who took 5 wickets for 13 runs off 4 overs.  He was the eventual MVP of the match.

The second game of the day’s schedule had Trinidad & Tobago taking on Guyana. The hundreds of fans hoped that this game would infuse some excitement in the cricket. There is mixed feelings as to whether this materialized. Twenty20 cricket is about the batsmen “going nuts with the cricket bat”.   It’s about batsmen “blasting cricket balls” all over the field. It’s about seeing some of the “strangest and weirdest cricket shots” with balls flying over the boundary ropes.  Only Derek Narine wetted the fans’ appetite, to some extent, when Guyana batted. 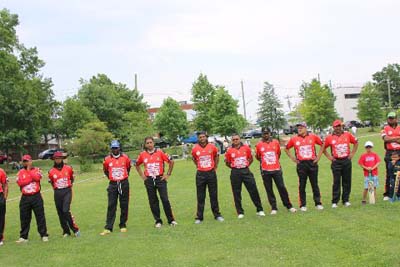 T&T batted first and Michael Noble and company of bowlers sent them to the showers for a paltry 75 runs. Noble captured 5 wickets for 14 runs off 4 overs, and the game’s MVP title.  Requiring 76 runs for victory, Guyana sent in the “wonder kid” (as I call him) Derek Narine, as one of the openers. The first ball was dispatched by Narine to the boundary. The fourth ball, a maximum. He wanted to get it over with quickly.  I overheard some fans lamenting that “man da na enough runs. De game go over too quick”. (Some West Indian colloquialism). In fact, the game was soon over, two more maximums and five boundaries later.  Narine made 29 runs “in a hurry” and Guyana knocked off the required runs in 8 overs, winning by eight wickets. Like Pakistan, Team Guyana finds itself with points, and on the charts of the opening round.

In the first two games of the tournament, the top players from the four teams were on duty at the ICC New York Cricket Combine. Hopefully, those players will be available for the next round of games, and a higher level of competition is expected with the addition of those star players added to their respective teams. It would be excitement galore! So cricket fans, come on out on Saturday, June 18th, at the Ferry Point cricket fields, at Whitestone, Bronx, and enjoy some fantastic T20 cricket. Bring your “picnic baskets” and your coolers. You don’t need a tent as enough shade is provided by the trees surrounding the playing areas.

See you at Whitestone Park on Saturday, June 18th! Come out and “scream your lungs out” for your country’s team, as Guyana squares off against Pakistan and Trinidad & Tobago faces Bangladesh. The first match is at 10:00am.