Mark Tyrell during his spell of 3 for 22 against Trinidad & Tobago. Photos by Shiek Mohamed

The points table now reads: Pakistan 10, Guyana 10, Bangladesh 5, and Trinidad & Tobago 5. With two games remaining for each team to qualify for the playoffs, there is a mad scramble for wins and thus points on the table.

Trinidad & Tobago went into their game against Guyana in high spirits having successfully chased down 229 runs for victory in their previous game against Pakistan. But, like the “fine print” of a TV commercial for a law firm states, “Past performances are no indication of future results.”  It was just that. Guyana was shellacked by Pakistan two weeks ago to the tune of 252 runs in 20 overs.  If T&T had any sure chances of making it to the playoffs, it was imperative that they win the game against Guyana. However, they were crushed by the representative squad from the South American nation of Guyana. They must now win their next two preliminary round matches to ensure a playoff berth.

Guyana took first strike, opening with Renrick Batson and the hard-hitting Derrick Narine. After a painstaking 10 ball, 5 runs period, Batson went in the third over for 5, with the score on 17. T&T restricted their opponents to 31 runs in the Power-play. In the seventh over Guyana lost Dyanand Roopnarine for 9, with the score on 35. T&T were bowling a tight line and containing the Guyanese batsmen. Andre Brown was most troubling to the batsmen, sending down, at this stage of the game, two overs, and conceding only two runs, while bagging one wicket. 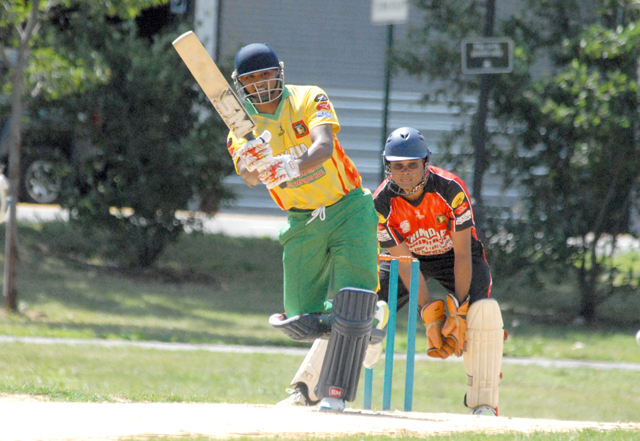 The other opener Narine, realizing the “mini predicament” of his team’s situation, toned down his characteristic bellicose style of batting. He played watchfully, but dispatched the loose delivery with disdain over the boundary ropes. The third-wicket partnership of Narine and Skipper Karan Ganesh put on an invaluable 58 runs. Narine was next to go, caught in the deep for 31 from 31 balls faced. This showed the resilience of the man. He is capable of modifying his style of batting to suit the situation.

Skipper Ganesh went on to score his send half-century in consecutive games. In both games he fell when on 58. With the score on 137 for 5 in the18th over, T&T was at an advantage. Andre Brown who had so far contained the batsmen, still had an over to bowl. But the other Andre, that is Andre “Rusty” Kirton, with bat in hand, had other ideas. He smacked a quick-fire 18 in 9 balls. The Guyanese innings finally closing at 164 for 7 wickets.

The bowling duties were shared among six T&T bowlers, and the wicket-takers were: Jameel Khan 2 for 21, Anthony Jaggernauth 3 for 32, David Mohamed 1 for 33, and Andre Brown 1 for 9.  The bowlers had done their job of restricting the powerful Guyana batting machine to an attainable total. It was now left up to the T&T batsmen to do their part. However, they started falling apart in the second over of the inning. It was a blistering first over from Mark Tyrell, who sent three batsmen to the showers. In his first ball he bowled opener Dene Sooden for 1, his third delivery clean bowled Steve Samuels, and skipper David Mohamed never saw the red, round missile that crashed into his stumps, it was the fourth ball bowled by Tyrell.

Cricket fans then saw a field placing that was never seen or heard of in T20 cricket, probably not in any format of cricket. Tyrell, was on a hat-trick after bowling Mohamed, with skipper Ganesh placing eight fielders in catching position around the batsman. Three slips, gully, short point, leg slip, very short backward square leg, and of course, the wicketkeeper. Tyrell fired the ball out of the off-stump. The hat-trick was averted. But the backbone of the T&T batting lineup was now broken.

By the end of the Power-play T&T was reduced to 16 runs for 4 wickets. They were, however, able to put on a sole meaningful partnership of 43 runs between Vijay Ramphal, 50 and Chris Mangal, 26, they were the only two T&T batsmen to reach double figures. The final score was 123 for 9 in 20 overs.

Bowling for Guyana: Mark Tyrell 3 for 22, Deveshwari Prashad, 2 for 23, Michael Noble, Andre Kirton, and Karan Ganesh, 1 wicket each for, 12, 22, and 19 runs, respectively.  The 165 runs total set for victory was reachable, considering the present context of T20 chases, but Guyana had completely harnessed the T&T batsmen.

Speedster Mark Tyrell was, of course, voted the Man-of-the-Match and was presented with the (MVP) award.