The Massachusetts State Cricket League kicked off the 2015 season with games all across the State after a long record breaking snow fall this past winter. 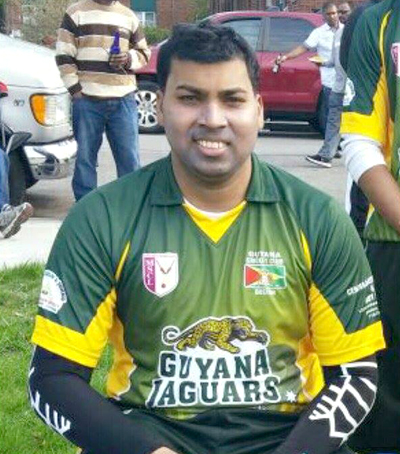 On Sunday, May 3rd Guyana Cricket Club took on defending champions Boston Gymkhana A at the beautiful Franklin Field in Boston. A game that was anticipated to be competitive from both teams did live up to expectations in front of a large and vocal crowed.

Spearheaded by a brilliant all-round performance from Sharaz Baksh, taking 2 for 17 with the ball then returning to score a match-winning 70, while smashing 7x4s and 2x6s, Guyana Cricket Club carved out a 3-wicket win over Boston Gymkhana A.

After winning the toss Guyana CC captain Sharaz Baksh elected to field first. Lenron Bruce and Lazarus Joseph shared the new ball, with Joseph picking up two wickets in his first over including Boston Gymkhana captain Bikram Singh. The pair made scoring difficult for the opposition with hostile and accurate bowling. Dino Chooweena was introduced into the attack and picked up a wicket in his first over. At the 20 over break Gymkhana was 64 for 4 with Purak Oza looking in fine form along with Sumeer. The pair continued to rotate the strike and dispatching the odd loose deliveries to the boundary. Baksh brought himself on and had immediate success striking with the first ball removing Sumeer (15) caught at short third-man.

Purak Oza continued to bat beautifully before he was out LBW to Lenroy Bruce for a well-played 48. Raja Tumla and Andy Singh put on 68 for the seventh-wicket partnership. Andy Singh stuck a few lusty blows, and he was particularly severe on left arm orthodox spinner Oditnarine Ramlochan, hitting back to back sixes, before he was bowled by Baksh attempting the reverse sweep, for a well-played 43.

On a large and sluggish outfield 183 was a competitive total, Guyana’s opening batsmen Dino Chooweena and Parmanand Doodnauth provided a solid foundation with a 58-run opening partnership. Dino Chooweena was looking in supreme form before he was caught looking to go over the top when on 29. Sharaz Baksh joined Doodnauth in the middle and the pair rotated the strike and ran hard. Doodnauth (23) was stumped looking to play across the line. By then Baksh was well set playing some lovely shots all around the ground, picking up regular boundaries and added 41 for the 4th wicket with Doodnauth Lallbeharry (5) being caught behind.

Lakhram Sanichar (12) joined Baksh at the wicket, and the pair seemed like they were going to take Guyana over the line before Baksh was caught top-edging a short ball. Gymkhana sensing an opportunity to get back in the game with 30 runs needed for victory, with the spinning duo of Raja Tumla and Raja Koli picking up three more quick wickets in as many overs. Lazarus Joseph and Ronald Doodnauth were unbeaten on 12 and 7 respectively, when they eventually reached the target of 184. Raja Tumla and Raja Koli finished with three wickets apiece.