By Ravi Madholall in Toronto
Canada cricket team will have a golden opportunity to continue their quest for a spot at next year’s International Cricket Council (ICC) limited-over World Cup event in England.

They are set to make those dreams come true when they compete at the forthcoming ICC World Division Two competition in Zimbabwe with other highly-competitive associated sides. 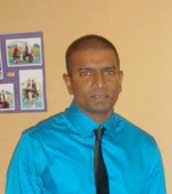 Hemnarine Chattergoon. Pictured above is the Canadian team prior to departure. Photo courtesy of www.gocricketgocanada.com

Former player Hemnarine Chattergoon has thrown his support behind the North America boys to emerge as one of the top two teams who will progress to the Qualifiers tournament in March also in the aforementioned nation above.

“Well, they are well aware of what is required to go back and participate at ICC World Cup tournament; they went there before and now they have a chance to regain that epic position but good cricket must be played and I am confident they will do well,” the Canada-based Guyanese stated.

According to the right-handed Chattergoon, who last represented Canada at the highest level in 2013, the team is well-balanced and that has given him the confidence to believe Canada can keep progressing to the mega event.

“I have known some of the guys and they are talented and based on what I have heard about the other players are talented enough too to make an impression as well; once they can go out there and play with the same level of momentum they did in the Division 3, I think they should be successful,” Chattergoon, who played for Guyana and West Indies youth teams reckoned.

Meanwhile, Chattergoon, the elder brother of former West Indies opening batsman Sewnarine Chattergoon, is fully backing his country-man Dillon Heyliger who is included in the squad. Heyliger represented Guyana at the youth level too and featured in several warm-up and friendly matches for Canada already. He has been impressive and is set to make his international debut. Chattergoon said he is talented enough to churn out good performances on this huge tour but must be focused and utilize his all-round skills.

In an effort to boost their game, Canada team spent some time in Barbados practicing on turf pitches as part of their preparations.