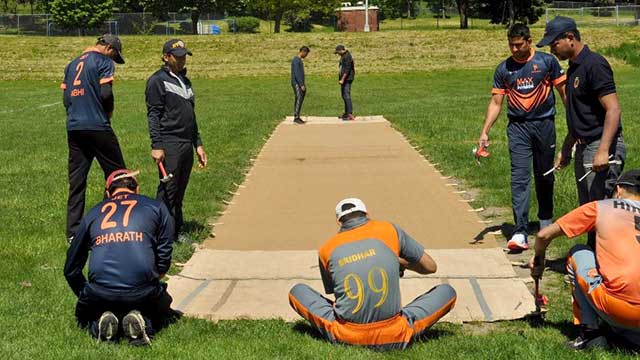 Players from both teams assist in laying the matting down.

By Sudharsan Ramarao
With the Highlanders needing just 26 off 7 overs, and with only four wickets in hand, the match was delicately poised. The JETS bowlers kept their team in the game for so long with disciplined and tight bowling.

Waiting for that one loose over, the Highlanders found themselves in a precarious position in what should have been a straight forward chase. That opportunity eventually came at the 29th over of the inning bowled by Mrinal Kanukolanu. Rahul Gadela and Bhavik Dalsania took full advantage of a tired Kanukolanu, scoring 18 runs off of that over. Rahul Gadela first smoked a huge six over long-on and Bhavik Dalsania followed up with a swipe to square-leg off an above the waist no-ball. From there on the Highlanders took control of the game, eventually romping home easily with four overs to spare. 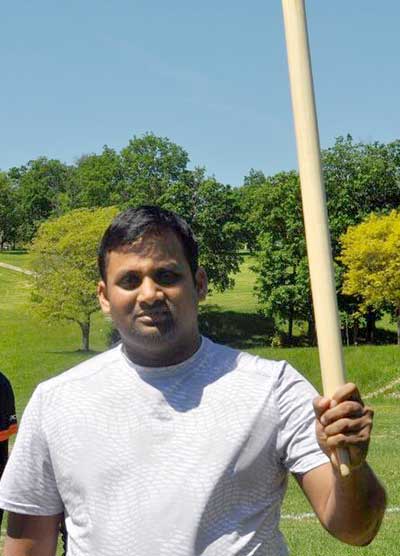 Hariprasad Amanapu was named man-of-the-match for his performance.

Chasing a subpar total of 127, the Highlanders were off to a rocky start as JETS captain Vishva Velichala bowled with great energy. His vicious in-swingers priced out Naveen Thiagarajan and Ashok Adikoppula, leaving Highlanders 5 for 2 at the end of three overs. Varun Penmatsa, continuing his sublime form from the previous game, playing cracking drives thru the off-side. His thunderous cover-drive of Pardha Phaniwas the highlight of his inning. However, he too fell soon after to clever bowling from Mrinal Kanukolanu, who also claimed the next wicket of Vishal Sridhar, courtesy of a stunning fielding effort by Ramesh Rangaraju.

The job was left to Hariprasad Amanapu and the Highlanders’ skipper Sridhar Mahendrakar. Hariprasad Amanapu, the mainstay of the Highlanders batting, played the waiting game. He and Sridhar Mahendrakar played risk-free cricket by cutting down expansive strokes and focused on rotating the strike. Seeing this, the JETS skipper Vishva Velichala maintained the pressure by sticking only with his four frontline bowlers. Ankur Bhanot, their off-spinner, once reeled off 5 overs for just 5 runs.

Wanting to gain momentum Highlanders took their batting power-play in the 24th over of their inning. Hariprasad Amanapu struck a clean blow for a six over long-on off Ankur Bhanot and perished while trying to repeat it the very next ball, courtesy of an excellent running catch by Abishek Penti. By the time Hariprasad Amanapu left for a hardworking 35, he had lifted Highlanders from a deep hole. Sridhar Mahendrakar too spent valuable time in the middle making 20 precious runs.

Earlier, the Highlanders won the toss and put the JETS to bat on a spongy wicket at Lincoln Park. Ashok Adikoppula, coming in from a splendid bowling performance in the first game, continued his great start to the season by cleaning up the top three batsman with venomous in-swingers; taking the cream out of the JETS batting. JETS were reduced to 10 for 3 and were set to play the catch-up game. Their innings never gained momentum, eventually folding for just 126. Danny Joseph coming in at number eight, held the innings up and scored a vital 22. Wides, at 23, was the top scorer of the JET’s inning, summing up their horrid day with the bat. For Highlanders, it was their left-arm spinner Hiren Kakadiya who showed great promise picking up two wickets off his delightful five overs.