It was a beautiful May afternoon when Pak America and Galacticos faced off at Van Cortland Park, Bronx, NY. Galacticos won the toss and elected to field on a slow track with low bounce. Pak America started well with an opening stand of 57 in 9 overs. 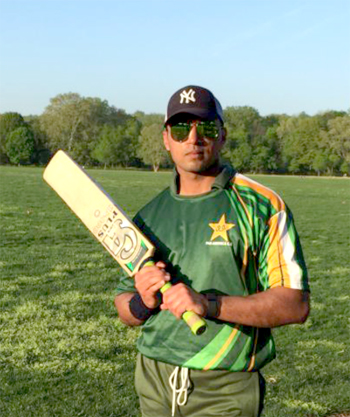 However, once Amir fell for 28, Hunain Munir played a master-class innings of 117 not out, his second in as many matches to lead the team to a respectable 275 in 35 overs. He added valuable partnerships with Asad (28) and Jawad (23*) and included 11 towering sixes.

Galacticos started poorly and lost their opener in the first over of the chase to the hostile bowling of Wahab Munir who enjoyed figures of 6-0-22-3. The second partnership of Arif (37) and Zain (46) caused a bit of bother of Pak America but some accurate bowling by Asad 6-0-25-3 and Sikander 6-0-29-2 caused a middle-order collapse, and in the end Arif (41) was left without partners to overcome the huge target.

Overall it was a good game of cricket played with a sportsman’s spirit from both sides. This was the second win in a row for Pak America and second consecutive century for Hunain Munir. No doubt he hopes to continue performing with his stylish stroke-play in the upcoming games.