Scorecard
ICC Americas third game of the WICB Regional Super50 Tournament saw them taking on Guyana in a reduced over game. The game which was reduced to 45 overs saw ICC Americas being sent in to bat after Guyana won the toss and won by 5 runs according to Duckworth Lewis system. 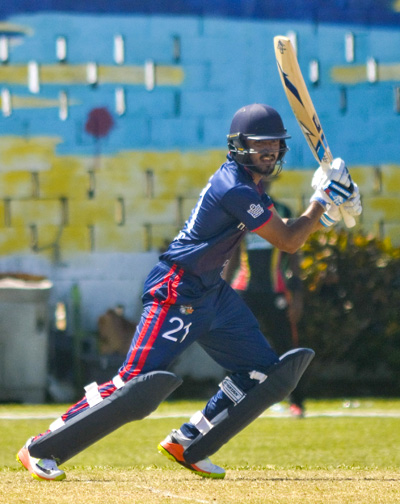 Nitish Kumar during his knock of 66 against Guyana. Photo by WICB Media/Kerrie Eversley

Paceman Ronsford Beaton struck in sixth over when Christopher Barnwell caught Leverock for 14, the score was 19. Skipper Nitish Kumar and Babar would consolidate the innings to some extent by adding 45 runs for the second-wicket, as Babar fell victim to West Indies Test spinner Devendra Bishoo leg before for 24 that came off 44 balls.

Kumar along with new batter Alex Amsterdam put on the highest partnership of the innings, 56 coming from exactly 14 overs at a rate of 4 runs per over.

Amsterdam was next to go when Leon Johnson caught him off the bowling of Beaton for 22, which came off 50 balls.

Kumar added another nine runs with incoming batsman Timroy Allen before he fell for a captain’s knock of 66 as the scorecard read 4 for 135. He registered the first half-century by an ICC Americas player in the tournament so far, and was decorated with three fours and sixes each.

The second half-century partnership of 53 in the innings came off just 7.2 overs from the fast scoring pair of Allen and Srimantha Wijeyeratne. The duo went on to finish on 37 and 27 separately.

Ronsford Beaton was the pick of bowlers, grabbing the wickets of Timroy Allen and Hamza Tariq to finish with four for 28 from nine overs. Raymond Reifer, Veerasammy Permaul and Devendra Bishoo all picked up a wicket apiece.

Two quick observations during the ICC Americas innings; there was a total 17 overs with a run rate of three or less and a total 26.3 overs of dot balls, which is more than half of the allotted overs.

Guyana in reply reached 212, which put them in front of ICC Americas in run rate as the game, was stopped because of bad light.

Assad Fudadin along with Rajindra Chandrika would open the Guyana’s innings, Chandrika was sent back early for 2 caught by Srimantha Wijeyeratne off the bowling of Timroy Allen with the score at 12 off 5.1 overs.

Another quick wicket had Guyana on the back-foot when Raymond Reifer was caught by Hamza Tariq off the bowling of Jessy Singh for 6.

With the scorecard reading 2 for 29 skipper Leon Johnson and opener Fudadin would bat Guyana back into the game with a 131 run stand for the third wicket.

Both batters went to score half centuries and took Guyana on a path for victory. Johnson would eventually fall to Nikhil Dutta for a well-composed 78 that included nine fours a six.  Fudadin’s patient knock 54 from 98 balls came to an end when Nitish Kumar had him caught by Srimantha Wijeyeratne.

Veteran West Indies player Shivnarine Chanderpaul and Christopher Barnwell would see their team home and pick up their second win of the tournament. Chanderpaul finished with 22 and Barnwell 29 not out.

Timroy Allen, Jasdeep Singh, Nikhil Dutta and Nitish Kumar had one scalp each.

ICC Americas’ next game will be against Jamaica Scorpions on February 1.