International Cricket Council (ICC) officials Eric Parthen and Ben Kavenagh, recently paid a visit to the Cricket Hall of Fame in Hartford, Connecticut. While here, they were taken on a tour in the city, which included stops at the famous Keney Park, which was at one time the top cricket field in the country, and at a newly built baseball stadium. 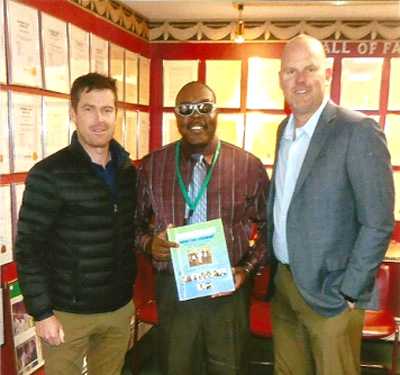 The duo who was hosted by the local ICC Americas representatives Kevin Hussain and Donna Bowes, and Connecticut Cricket League’s president Curtis Clarke, expressed their satisfaction with what they saw and how impressed they were with what they observed taking place at the Hall.

Parthen, the ICC Americas Project Manager, who has taken over the duties of Kavenagh, the former ICC Americas Regional Development Manager, said that the purpose of the visit was for him to get out and meet as many people as possible that are involved with the sport in the U.S.

“We are interested in setting up meaningful programs to help with the development and growth of the game in the region,” he said.

In response to a question posed to him about rumors making the rounds that the ICC plans to take over the sport in America, he said that it is not true. “Our aim is to unify the currently fractured cricket community, facilitating the United States of America Cricket Association’s (USACA) efforts to be registered as a member of the ICC and allowing cricket to flourish at all levels for the benefit of the whole sport in the U.S. “We want to get everybody involved in the sport in the U.S. to come together,” he said.

“We are not happy with the constitution that (USACA) has sent out to its membership ahead of the Special General Meeting that is set for April 8. The constitution sent out by USACA does not fully satisfy one of the express conditions of membership reinstatement previously imposed by the ICC, but we will not be taking any action against them until the meeting is concluded,” he added.

Based on some other issues involved, the ICC has made it clear to USACA that its Board will be considering the outcome of the April 8 meeting as well as the status of their  compliance with all other reinstatement conditions as part of the determination of USACA’s future positions as a member of the ICC, he said.

A former officer with the U.S.’s Olympic Committee, Parthen said that there are also talks taking place among many cricket enthusiasts to get the sport again included in the Olympics. “This would be good for its exposure and help to spotlight the interest in the sport which is the second most popular in the world,” he said.