Scorecard
A century partnership of 101 for the fifth-wicket between John Campbell and Rovman Powell along with a five-wicket haul by Damion Jacobs saw the Jamaica Scorpions sting ICC Americas, picking up their second win of the 2017 WICB Regional Nagico Super50. 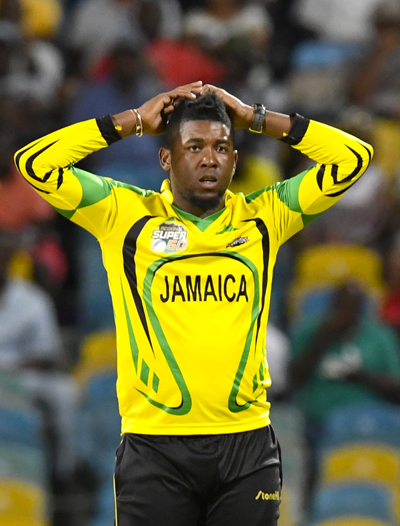 ICC Americas won the toss and sent Jamaica in to bat first. The Scorpions posted a total of 251 for 5 after the game was reduced to 45 overs because of rain. Chadwick Walton would open the innings with USA born and debutant Stephen Taylor, who chose to represent Jamaica after he was initially named in the ICC Americas team, Jamaica being the birth country of his parents.

With Jermaine Blackwood and Andre McCarthy the two new batters at the wicket, Jamaica would hope for some consolidation from the two, but Blackwood fell to Saad Bin Zafar for 9, to give Zafar his second wicket.

Andre McCarthy and Devon Thomas steadied the inning putting on 69 for the fourth-wicket, taking the score to 122. Devon would fall for 22, as McCarthy went on to compile a half-century. Joined by John Campbell in the middle, McCarthy would carry on his inning to reach 63, as he was caught by Timil Patel off the bowling of Cecil Pervez with the score on 150.

The combination of Campbell and new partner Rovman Powell delighted the crowd with some exquisite and power-hitting shots. Putting on 101 runs from just 67 deliveries, the pair showed no mercy to fellow Jamaican-born Timroy Allen, as they took 45 runs from his last three overs. Campbell finished the game on a high note, belting two sixes off the last two deliveries of the game. Powell and Campbell finished with half-centuries, 52 and 66 respectively.

In response ICC Americas wobbled, in the process succumbing to another defeat, as only five of their batsmen would reach double figures. Opener Kamau Leverock was the highlight of the Americas inning, hitting 75 from 81 balls, which included seven fours and two sixes. On two occasions Leverock took on the bowlers and smashed 10 runs from two deliveries.

Leverock witnessed three of his partners go, before he fell to Damion Jacobs, caught by wicket-keeper Chadwick Walton. The other contributing partners were opener Fahad Babar (5), skipper Nitish Kumar (8) and Srimantha Wijeyeratne (19).

The batsmen to get into double figures were Alex Amsterdam (20), Nikhil Dutta (18) and Saad Bin Zafar (15).

There were three partnership of some significance with which Leverock was involved, with Babar in their opening stance, it yielded 35, with Wijeyeratne they produced the highest of the three, 48, and along with Amsterdam the duo added 33.

Damion Jacobs did the wreckage picking up wickets on a regular basis. He finished with 5 for 23, and former West Indies Test bowler Jerome Taylor had two wickets, while Gavan Brown and Nikita Miller had one wicket each.