By Sam Sooppersaud
The Indo-Caribbean Federation will present its Annual Cricket Match for the ICF Trophy, on Saturday August 13, 2016, beginning at 11:00 am. A Guyana XI will take on a Caribbean Invitational XI, with guest players from Pakistan and Bangladesh. The venue is Baisley Pond Park Cricket Field.

The notable Guyanese journalist and Sports Commentator,Joseph “Reds” Perriera, will be making an appearance at the game He will be in the Big Apple as a special guest of the Atlantis Cricket Club, celebrating their 50th Anniversary of Formation. Thanks to Mr. John Aaron for securing the appearance of Reds for ICF game, John has been working closely with the Federation over the years assisting with the cricket match. If you were fortunate enough to listen to Reds in his days, you would have listened to one of the best, not only in the Caribbean, but the world. He was just dynamic. Come out and meet him and have a chat with him. 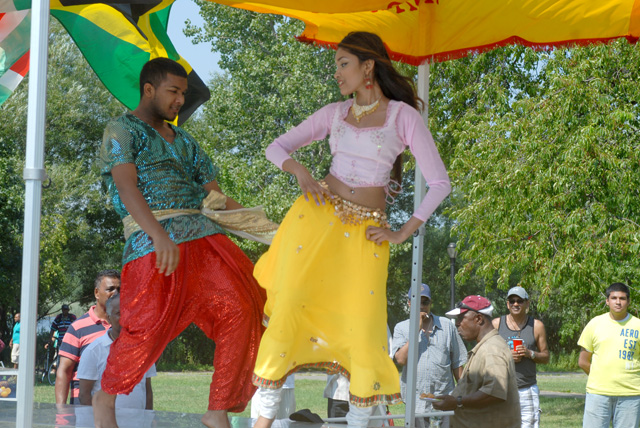 Dancers entertain the crowd during the half time break at last year’s game. Photo by Shem Rodney

Many exciting players have been invited to take part in the game. Few have represented the USA in ICC tournaments, while there are others who have played representative cricket for their country of origin. Some of the notable players named so far: Karan Ganesh, Michael Noble, Mark Tyrell, Akshay Homraj,  Sharaz Ramcharran,  Andre Kirton,  Terrence Madramootoo, and the hard hitting, Faisal Taj, David Mohamed, Chris Powell, Balchan Baldeo, Syed Abdullah. Efforts are being made to secure the diminutive sensational left hand batsman, Avin Gangadin, who most recently played for the Public School Athletic League 2016 Champions, John Adams High School.

The game would be a 40-over affair. Two of the best umpires will be officiating: the reputable Steve Kalloo and Ashook Brijcoomar of Canada. They have been the regulars for over two decades and have always performed their function with distinction.  Commentators extraordinaire, Lenny Achaibar and Carl Bennett will call ball by ball play, while the young Achaibar, 8 year old Matthew, will do the color. Come and listen to Matt imitating the voices of Geoff Boycott, Ravi Shashtri, Michael Holding, Danny Morrison, and numerous others.

Over the past few Saturdays you cricket fans have been entertained at the Rockaway T20 NY Cricket Fiesta.  Hundreds of you have travelled to Fort Lauderdale and wetted your appetite for exciting cricket at the CPL games. Many of you, maybe, have watched the WI vs India tests, or even the Sri Lanka vs England test matches. Now you will satiate your appetite with the third format of the game: an “ODI” (40 0vers, not 50).

In the past years the Annual ICF games have been very exciting. Fans had enough to scream about supporting their respective teams.  Apart from the cricket, it was times for friends who have not seen each other in years to rekindle their bonds. It’s an opportunity to meet other cricket fans who you have never met, and create new friendships. Bring your family; invite some friends and enjoy the half time entertainment. Bring your picnic basket, and of course, your cooler, fill with your favorite “invigorating” beverages. It will be a day of fun for all!