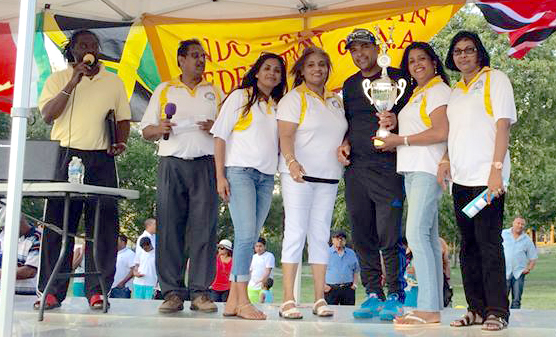 By Sam Sooppersaud | Scorecard
It is the job, and the responsibility of a batsman, once set, to see his team through to victory. Personal accomplishments are great for the individual players, but such considerations are secondary, when it comes to the goals of the team.

I am not suggesting that all players look at their stats, but sometimes in their exuberance they lose track of the team’s goal. Nothing is wrong with a particular player scoring 50 or a hundred, or a bowler doing his best to get a five-wicket haul. But the team should always come first. 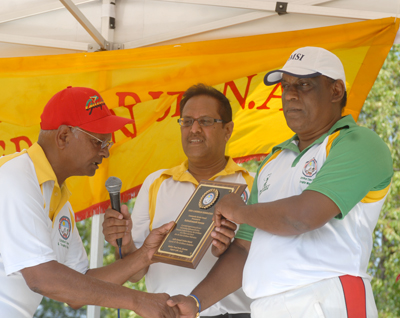 Last Saturday, the Indo-Caribbean Federation (ICF) of New York hosted a representative Guyana XI and an Invitational XI, at their annually featured ICF Cricket Match, this time marking the 30h anniversary of the organization headed by Ralph Tamesh, its president, and the 25th anniversary of the ICF hosting the featured cricket match.

In the Guyana XI chase of the Invitational XI’s total, I felt that two batsmen who were on the top of the bowling at a crucial stage of the game, simply “gave it away.” They lost their wickets with poor shot selections. The two players shall remain anonymous. But, fans, you were there, you make the call.

With that said, let me now move to the context in which these statements are being made. It was a hot and sweaty day at Baisley Park, Queens – the venue of the Silver Jubilee Cricket Match. It was also the organization’s 30th anniversary celebration of Indian Arrival Day.

As usual, the cricket field was immaculately manicured, thanks to the efforts put in by Joe Siewharack and Frankie, and members of the Melbourne-Alliance Cricket Club, which play their home matches in the American Cricket League, at Baisley Park.

A crowd in excess of 500 cricket fans was on hand to witness the contest. Yes, in New York, 500 fans at a game is considered a crowd. 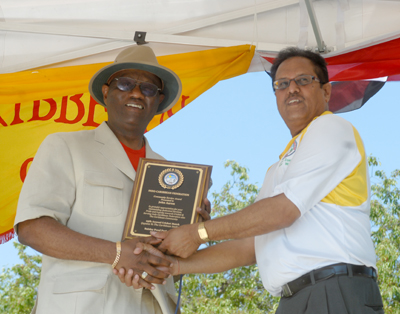 Come to think of it, the 25th anniversary of the ICF cricket matches. What an accomplishment by the organization, its tireless and dedicated President Ralph Tamesh, and the equally hard working members! The ICF continues to serve the community with the same zeal that it did when it was founded in 1985. The ICF is also involved in numerous charitable projects in Guyana and the West Indies, in addition to helping to preserve the rich cultural heritage of the forefathers and mothers of Indians, who paved the way and built a life in lands far away from their motherland of India.

From early Saturday morning, Ramesh of Star Party Rental and his crew, were at the park pitching the tents and setting up the chairs and tables. This was a milestone occasion for the ICF, and all plans were made to make it a grand occasion, for players, fans, and members of the federation. If you weren’t at the park last Saturday, then you missed out, big time, on a super celebration.

Now, to the cricket match! Skipper Dave Mohammed of the Invitational XI won the coin toss and immediately informed eight year-old Matt “Danny Morrison” Achaibar, the day’s junior color commentator, that his team would take first strike. His reason – the sun was too hot at the moment. He said that a score of 250 would be a defend-able total.

Skipper Karan Ganesh said had he won the toss, he also would have batted first.  He felt that scoreboard advantage is viewed as “one of the demons” when a team is chasing a seemingly unattainable total. So it is sort of an advantage to bat first. With that being said, he added, “We have to restrict them. We have the batting and can get to 250 quite comfortably.”

Openers Javien Thomas and Andy Mohammed set about their task forcefully. Boundary after boundary. At 67 runs and in the 10th over, they lost Mohammed (34) caught attempting yet another of his extravagant shots. The second-wicket partnership of Thomas and Dindial Soodeen added 30 runs before Soodeen (11) went. Within the next seven overs the Invitational XI slipped three wickets for the addition of 30 runs. Guyana had gained some momentum, but the game was in the balance. Javien Thomas batted doggedly for his 40 runs.

In all, skipper Ganesh employed nine bowlers in his effort to contain the run rate. He succeeded somewhat, and by the 35th over the scorecard read 198 for the loss of eight wickets. Only the bowlers were left to show up. Would Skipper Dave Mohammed and his boys, be able to score the 250 runs he predicted at the toss? He took up the self-made challenge, and he and his number 10 batsman Randall Wilson frustrated the Guyana XI bowlers with an invaluable partnership of 52 runs. The innings closed at 250 for 9 wickets. Faisal Taj (33), The Hitman, as he is known, was run out when it appeared that he had just “opened up.”  Dave Mohammed (35) was the last wicket to fall. Randall Wilson was 21 not out at the close of the inning. 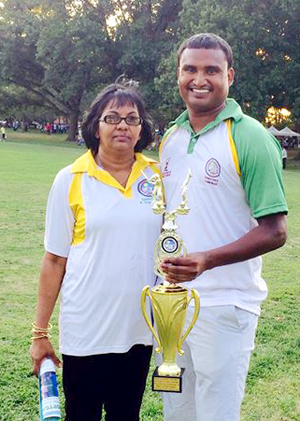 MVP of the game Karan Ganesh with Sabrina Dyal of the Federation.

Of the nine bowlers used by the Guyana XI, R. Batson, K. Ganesh, and R. Seeram snared two wickets apiece, for 23, 26, and 34 runs, respectively. Terence Madramootoo 1 for 36 and Derek Narine 1 for 23, accounted for the other two wickets, in addition to the run out.

Set a total of 251 to win, the Guyana XI squad felt comfortable. After all, their batting lineup was packed with hard-hitters. The squad boasted batsmen who had scored centuries in the recent past.  Only a week ago Dominique Rikhi had scored a ton and Terence Madramootoo had blasted his way to 133 runs not out, in an EACA league game. With Suriname national player Chris Patadin, USA national all-rounder Karan Ganesh, and the former PSAL “Wonder kid” Derek Narine, the 251 runs for victory seemed a molehill rather than a mountain. But, was it really a molehill? Read on!

Narine and Rikhi commenced the run chase for their team. Rikhi was his usual polished self while Narine bludgeoned the bowlers. Rikhi (11) was the first to lose his wicket, with the scoreboard reading 36 runs for the loss of one wicket in the fourth over. In as much as they had lost a wicket, Guyana was in an advantageous position at this juncture of the game, batting at an average rate of nine runs per over. And, with Narine still at the crease! It was a ball (of fun) in the park!  Guyana was on its way to climbing the molehill. At least, this was their thinking.

Narine and Chris Patadin took the score to 63, when in the sixth over Narine played a blistering shot to point, which Rafeek Nazeer grabbed at face level. The fielder barely had time to react, as the ball flew to him like a bullet. It was the catch of the match!

Derek Narine hit 4x4s and 1×6 in his short, but rapid-fire inning of 30 runs. It was then 63 for 2 wickets. Guyana going at the average run rate of 10.5 runs per over. The pendulum of victory had swung in their favor.

A third-wicket partnership between Patadin and R. Batson produced 69 runs, while consuming 105 balls. At one stage Guyana was 142 for 2 and at a rate of six runs plus, per over. They simply needed to maintain the present run rate in order to come out on top. It was soon 108 runs to get off 108 balls, and seven wickets in hand, with Madramootoo, Ganesh, and Kumarlall, yet to come!

Madramootoo went for a painstaking 12. Patadin went for a well-made 42 off 59 balls; R. Batson lost his wicket with his score on 40. It was then 182 for 5 wickets;  30.5 overs bowled; 69 runs needed in 55 balls. In the context of limited overs cricket, Guyana would have no problem getting the required runs. At this juncture Skipper Ganesh was in the middle. He was settled in; cricket parlance for when a batsman is in the middle negotiating the bowlers with ease. Deveshwari Prashad was cleverly rotating the strike allowing his skipper to face most of the bowling. 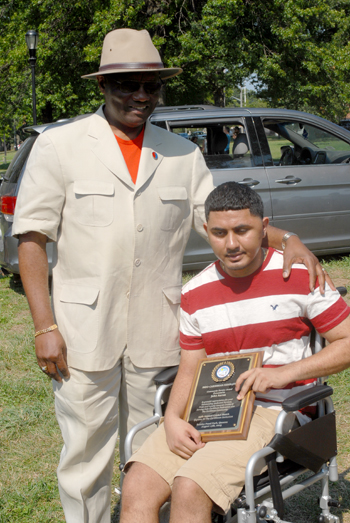 John Aaron one of the awardees at this years game with accident victim Ajay Teakram. Photo by Shem Rodney

With the score on 230 for 5, the Invitational XI struck “gold.” They removed Prashad (23). They had succeeded in breaking the 48-run partnership of Ganesh and Prashad. Three balls and two runs later Ganesh holed out to deep mid-wicket. He pulled a short-pitched ball but was unable to clear the boundary. 232 for 7; 19 runs needed in 15 balls. Then the 8th wicket fell. 237 for 8.

The crowd by this time was in frenzy. There were shouts of encouragement coming from all around the field. Cars stopped on Baisley Boulevard; the occupants wanting to see what was going on. Fourteen runs were then needed for the win, and just six balls to be bowled.  The over read; a dot ball, 2, 1, 6, 0, and 2. Six legal deliveries bowled, with only 11 runs scored. Guyana fell short of victory by a mere three runs.

At halftime in between innings, the ICF honored two gentlemen who have done yeoman’s work in the furtherance of cricket, and in their communities. President Ralph Tamesh expressed the gratitude of the ICF and the public, in his address to the crowd.

I was asked to introduce 2015 honoree Rabindranauth Seeram, a cricketer from Cornelia Ida, West Coast, Demerara, Guyana. He represented Demerara, Guyana, and the West Indies Under-19 teams in his time. He is a Level 1 cricket coach and has served as Guyana’s national men’s cricket coach.

Next on stage to receive his recognition award was John Aaron. John needs no introduction in the NY and USA cricket circles. He was the past secretary of the United States of America Cricket Association, and is now the secretary of the American Cricket Federation. In addition to serving as the secretary of Atlantis Cricket Club – NY, one of the more progressive cricket clubs in the New York metropolitan area; and later as president of the club for ten years, Aaron has also served as secretary and later president of the Eastern American Cricket Association, and Chairman of the New York Cricket Region.

Both honorees expressed their gratitude to the ICF for bestowing the honors on them. Mr. Tamesh reminded them that the awards were truly deserved, and the organization wishes them every success in their endeavors.

Dinner was served to the players and the visitors, and as usual, the ever-present “cold invigorating beverages” were in abundance.

Apart from the game itself, the fans were treated to some fine performances from two of the most promising dancers; Bollywood-style in the New York City area. First Sean Khulsum did his stuff, followed by the reigning ICF Dancing Queen Nikki Khan. The duo then came together for another gyrating performance. In between Cliff Joseph gave us a calypso rendition of the popular song – “Backtrack”.