“It Was A Great Experience At Global T20!” – Guyanese Steven Jacobs

By Ravi Madholall
“It was a great experience playing in the inaugural Global T20 Canada and I [am] happy to be on the winning side as well.” These were some of the words from all-rounder Steven Jacobs after his team, Vancouver Knights lifted the trophy on Sunday at the Maple Leaf Ground, King City, Toronto. 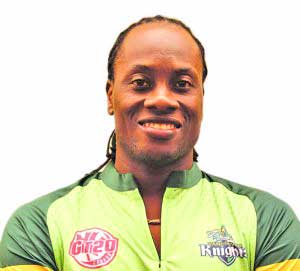 The former West Indies youth skipper and Guyana first-class player Jacobs stated that the team played excellent cricket from the commencement to the conclusion.“I think we just went out there and played our natural game; it was a wonderful tournament especially playing with and against players from around the world,” the off-spinner related.

Vancouver Knights were led successfully by the “Universal Boss”, Chris Gayle whose performances were also instrumental to see his side pocketing the lucrative US$500, 000. Knights got the better of West Indies ‘B’ by a comfortable seven-wicket margin.

Their win was led by Canada player Saad Bin Zafar, who constructed a well-calculated, unbeaten 79 while South African Rassie van der Dussen was also at the end when the momentous boundary was struck.

“Obviously, you want to win the tournament, so we had to play hard from the first match, because you have got a lot of quality players on show as well; the tournament was competitive, but I enjoyed it and glad we were the victorious side in Canada,” Jacobs mentioned.

Jacobs finished the tournament in a disappointing manner having only taken two wickets with his off-break conceding 101 runs from 10.3 overs. He featured in three of the nine scheduled matches.

Jacobs will now be heading to the Caribbean Premier League’s eighth edition and is set to represent Jamaica Tallawahs when the action starts on August 8 in the Caribbean and Florida.