By Sudharsan Ramarao
The sun was beating down, but the overnight rains had left the pitch damp and the outfield wet. Conventional wisdom would have dictated the toss-winning team to field first. However, the Highlanders had already made it to the playoffs and wanted to test their batting without the pressure of a posted scoreboard total. They made the aggressive call to bat first after winning the toss. 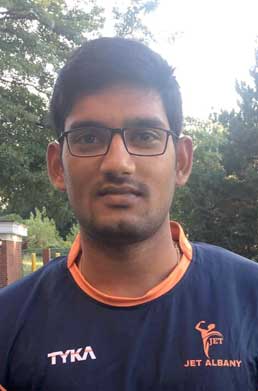 Pardha Phani earned the man-of-the-match award for his 36 and 2 wickets he took.

Openers Naveen Thiagarajan and Varun Penmatsa started off fluidly, taking singles through the vacant gaps. Both the JETS’ opening bowlers Vishva Velichala and Bhargav Bellam stuck to tight lines forcing the Highlanders batsmen to rely only on singles. Bhargav the slinger produced the first chance for the JETS as Varun Penmatsa went early in to his pull shot and lobbed the ball straight up in the air, only to be misjudged by the wicket-keeper, and was dropped. First chance gone. But Bhargav was not disappointed, as he came back the very next ball and bowled a short of a length ball outside the off-stump, luring Naveen Thiagarajan in to a cut short. Naveen obliged it, but was late on the cut. The ball took a slight edge and Danny the wicket-keeper redeemed himself by holding on to the ball.

Shoaib Hassan arrived at the middle and started with a bang, hitting Pardha Phani for a beautiful boundary through the midwicket region. However, the clever bowler that Pardha is came back the very next ball and bowled a peach of a Yorker, rattling Shoaib’s stumps. Varun Penmatsa who looked set by now was then run-out by a brilliant piece of fielding effort from Bhargav, who was hitting the stumps regularly from the start of the game.

Sridhar Mahendrakar and Vishal Sridhar joined hands to steer through the middle overs. Sridhar was timing the ball beautifully and hitting everything in the middle of his bat, while Vishal took his time to settle in. Just when Sridhar was looking to step up the gear, he got out to Chaitanya Donthineni while trying to flick the ball off his hip. Sudharsan Ramarao then joined Vishal Sridhar in the middle, and the two batsmen strung together a quick partnership to take Highlanders to a decent total. Vishal made a fighting 18, while Sudharsan made a run-a-ball 15. Highlanders finished with 106 at the end of 20 overs.

Chasing 107, the JETS started off aggressively with their opening batsmen Chaitanya Donthineni hitting the very first ball of the inning for a huge six. Their intention was clear. They wanted to take the fight to the Highlanders, but Chaitanya was unlucky in the next over from Vinit Todi as a full-blooded drive caught the hands of Naveenan at covers. Ravi Ekambaram then came in and started to time the ball sweetly. A couple of sweet boundaries later Ravi failed to read a straight one from Hiren Khakadiya the left-arm spinner, and was castled.

Shoaib Hassan then took out Dany Joseph with a brutal short-pitched ball that Dany steered straight to Vinit Todi at short third-man. Sridhar Sagi then kicked the stumps and was out hit-wicket. Pardha Phani then joined Chakri Reddy and both played their shots from the word go. Pardha took a particular liking to Rahul Gadelas’ off-spin, smoking it for three huge sixes. Both batsmen ran very hard and converted some singles to doubles. With the sun beating down hard, the outfield became fast, and added to the JETS’ advantage. The JETS finally chased down the target in 16 overs. Chakri Reddy was not-out on 17 while Pardha Phani made an attacking 33 from 21 deliveries.

For his all-round performance that included a peach of a yorker and three huge sixes, Pardha was declared Man-of-the-Match.