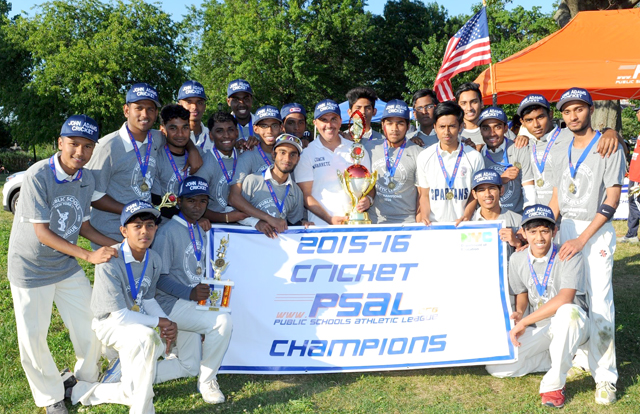 Both teams entered the finals brimming with confidence. They had, in the playoffs rolled over their opponents with relative ease: the Spartans stormed over William C. Bryant (71-72), Franklin K. Lane (145-106), and Abe Lincoln (198-94), while FDR took care of Hillcrest (159-149), Brooklyn International (156-144), and Richmond Hill (76-77).  A keen and close contest was expected. However, the fans were a bit disappointed (unless you were a John Adams supporter).

It was a small crowd at the start of the game, but grew to hundreds later. They witnessed the Spartans domination of the Cougars. Many around the field felt that the two teams “were not in the same league,” meaning the Spartans were a far better team than the Cougars. The body language of the players on each side clearly spelled this out. After all, a few players from the Spartans were already playing cricket in the adult Sunday leagues.

Earlier in the day, Joe Siewharack and the grounds staff had manicured the field creating a lush green carpet. It was a smooth and hard surface, a batting paradise, the cricket slang to describe a wicket that favors the batsmen. The folks at PSAL, Donald Douglas, Administrator, Bassett Thompson, Cricket Commissioner, Lorna Austin, Cricket Coordinator, Ricky Kissoon, Assistant Cricket Commissioner, and their staff had erected an orange tent and trucked in all the necessary equipment to ensure a successful day’s activity: the 9th Finals of the PSAL run cricket tournament.

Commentators extraordinaire, Lenny Achaibar and Carl Bennett were on hand to call the ball-by-ball play, and did a great job as usual. The officiating umpires were Mohammed Baksh, Jr, and Shameez Yussuff. The third umpire was Carl Patrick. The President of the United States of America Cricket Umpires Association, Fitzroy Hayles sat in the media tent to lend a helping hand, if necessary.

The cricket contest was not of the quality that is expected in a finals. It was a virtual no-contest. Yes, there were some “interesting: moments, but on the whole it was a somewhat disappointing day for the cricket fans, unless of course, you were a Spartans supporter. The Spartans far outplayed the Cougars.

John Adams won the coin toss and elected to take first strike in the middle. Skipper Richie Balkarran commented that he wanted to put on a challenging total and use his bowlers to restrict the opposing batsmen. And with scoreboard pressure! This plan was accomplished. His bowlers responded to his call.

The Spartans openers of Sajed Hassan and Rifat Rico started slowly. 25 runs came at the 6 over Power Play, at which time they lost the wicket of Hassan. FDR’s leggie, Mohamed Hassan sent down 3 overs for 4 runs, two of which were maidens.  With the score on 38, in the 8th over, Adams lost their second wicket. FDR had the advantage at this juncture of the game. A 79-run third-wicket partnership between Avin Gangadin (55) and Alix Hussain (31) repaired the slight lapse.

The fans were treated to some classic batting from the diminutive left-hander, Gangadin. He is a recent import from Guyana where he played at the Under 15 National level. His favorite shot was the delicate leg glance which brought him three consecutive boundaries at one stage of his inning. He has a typical Shiv Chanderpaul wide stance at the crease. His gave a sedate, exquisite batting display. On the other hand, his partner, Alix was more adventurous with the bat. He would jump out of his crease and carted the ball over the bowler’s head, or over the heads of the inner circle fieldsmen.

Alix went first in the 15th over followed by Gangadin 10 balls later. With the score on 140 for 4, Pranta Palit played a mini cameo of 13 runs in 6 balls. With 6 balls remaining John Adams were 155 for 5. Skipper Balkarran took matters in his own hands. Bowling in the death over was Mohammed Hassan. He had earlier sent down 3 overs for a miserly 4 runs.  This is how the last over went down. Hassan to Balkarran – 6, 4, w, 2, 2, 4, 4, with the Adams innings closing at 178 for 5.

Chasing 179 runs for victory is a daunting task, and for a relatively inexperienced high school squad. Think of the scoreboard pressure alone! FDR sent out Mohamed Hassan, the PSAL’s most prolific run-scorer this season (over 550 runs) to open the batting. He is also the Wingate Athletic Award recipient for 2016.

Not much to write or say about the run chase.  Apart from Hassan, no other FDR batsman offered any resistance whatsoever. Not that the bowling was “on spot”. Adams threw down 32 wades. The shot selection was disastrous. Batsmen lost their wickets playing injudicious strokes. Only two batsmen reached double figures: Hassan 39 and Shahadat Mia 10. The inning folded at 108 all out in 19.2 overs.

The destroyer of the FDR batting was Skipper Balkarran. His bowled 4 overs, 2 maidens, conceded 7 runs, and claimed 4 wickets. Extraordinary bowling figures!  Coupled with his 34 run contribution, it was no surprise he was awarded the MVP of the match.

The John Adams Spartans have claimed their second PSAL cricket championship. It is to the credit of their coach Alex Navarette that they were able to go all the way. Alex is a nice, easy going guy who is always encouraging his boys. He spends countless hours – gratis – to ensure that they are prepared for games.

I know Coach Foster of FDR. A hard worker.  He is very supportive of his wards and cheered them on, even if they make a blunder, he is there to lift them up. Kudos go out to FDR for their effort: They earned the privilege of appearing in the 2016 PSAL cricket finals. Though they lost the game, they are still winners.

After the game, awards were presented to players with outstanding personal performances during the regular season. The MVP for the finals was Richie Balkarran, while the Best Batsman Award for the finals went to Avin Gangadin.