Heavy overnight rain threatened cricket action in the New York area on Sunday but the down pours ceased and the low hanging clouds dispersed early enough to allow Liberty Sports Club and New York Centurion a 37 over clash at Bay Park. Dilly Khilawan’s 39, Francis Mendonca 33* and Andre Kirton 4 wickets for 25 along with Leon Mohabir’s 3 for 23 ensured the GMA Enterprise Real Estate and Tax Services & Royal Empress Banquet Hall sponsored LSC come out with a 21 runs victory. 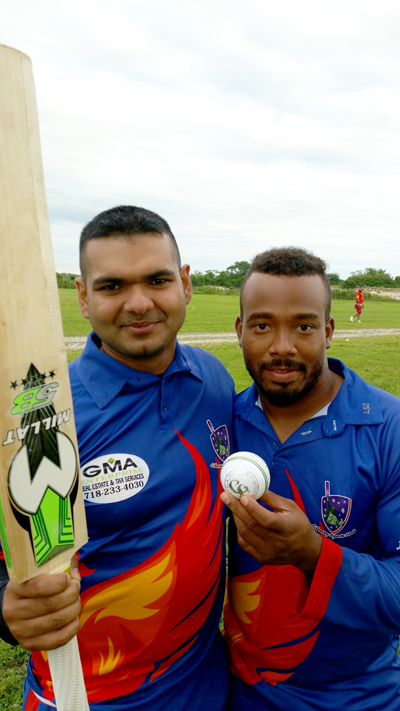 After some repair work to the pitch by the Centurion players the matting was laid down and the toss was spun to start the 6 overs shortened game. Centurion won the toss and sent in LSC to bat in order to utilize the wet conditions. The Red Team benefitted from the conditions when a 19 runs opening partnership was ended in the 8th over by a lifting delivery to Sudesh Dhaniram who gloved it to the keeper.

Partnerships were going to be key in unfriendly batting conditions and LSC received a handsome 41 runs from Khilawan and Trevor Henry. The patient Khilawan struck 2 fours in his 17 over knock before he was bowled for 19. Shortly after, Henry would follow via the caught behind route for 24.

Trinson Carmichael and Rusty Kirton would have brief stays at the crease to leave #TheBlueNation on 80 for 5. Francis Mendonca and Romeno Deane would add another meaningful partnership of 20 runs. Danesh Deonarain joined Mendonca and added a further 26 runs partnership before Leon Mohabir and Javed Shakoor partnered with Mendonca to close off the inning.

The final score for LSC was 143 for 8 off 37 overs. Mendonca’s unbeaten 33 in though conditions, marked with 1 boundary and a maximum, allowed LSC to a defendable total. NY-Centurion’s disciplined bowling was led by Ritesh Bridgelall’s 3 for 35 and supported by Vijay Persaud 2 for 24, Marlon Mangroo’s 2 for 26 and Carlton Baker 1 for 28.

Skipper Shazam Ramjohn struck a quick 25 to start things off and at his departure his team was in full contention at 41 for 2 in the 13th over. Rusty Kirton had been introduced into the attack and removed Ramjohn and his opening partner Deoraj Sewanan by the end of his 4th over. Four overs later Kirton would make a double strike to swing the game back in LSC’s favor. Troy Haley (13) & Ritesh Bridgelall fell in successive deliveries to leave NY-C at 53 for 5 in the 17th over. It was 54 for 5 the following over when Javed Shakoor held on to Mahendra Khusial (5) at long on off of Trinson Carmichael.

The batting power play brought an end to a 9 over, 34 runs partnership between Carlos Bachu (12), who held out to Kirton at long on, and Vijay Persaud (17) and brought Leon Mohabir into the action. Persaud chipped Henry to a smart running catch by Deane at the mid-wicket boundary and removed any hope of late inning heroics for NY-C. Mohabir scalped Ridwan Ramjohn and Marlon Mangroo to bring the inning down to 22 needed off the last over to be bowled by Dhaniram.  It only took one ball for Dhaniram to knock back the Carlton Baker’s off stump to wrap up the 21 runs victory.

Bowling for LSC Kirton picked up 4 wickets while Mohabir knocked over 3. Carmichael picked up 1 for 21, Dhaniram 1 for 11 and Henry 1 for 36.

The win caps a strong round 1 of the EACA CricketZone 40-Over completion. #TheBlueNation finishes with a 6-1 record ahead of the July 4th break. Net run rate will separate the club from Big Apple Sports Club at the top of the points table. Competition resumes in two weeks when LSC hosts Everest/ACS to start their 2nd Round of A Division one games.