Knights Are 2017 T20 Champions of Capital District of NY 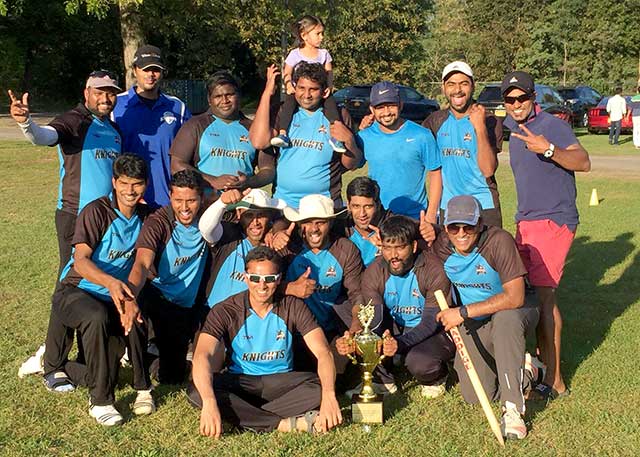 By Sudharsan Ramarao
Mental skills always take precedence over physical skills. Ask Rafael Nadal who holds a patented mental edge over Roger Federer, the most skillful player ever to play tennis. Check with the great Australian cricket team of the 90s who steamrolled every single opponent that came their way. They would echo the same thought. You still need the physical skills, for they represent the capability. But capability is just a thought in the mind and means nothing if it doesn’t come to fruition. That’s where you need the mental skills: toughness and tenacity. Your ability to stay composed and execute your physical skills irrespective of situations, conditions and opposition is what determines if you are a winner especially in a championship game where the margin of error is so less. In the finals of the T20 electric league, it was a tough Knights team that executed its plan to near perfection beating the highly talented Highlanders and becoming T20 Champions of the Capital District of NY. 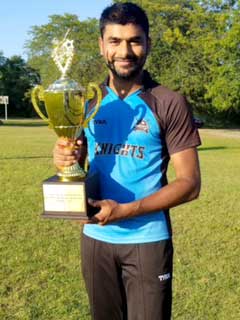 Winning the toss and batting first on a flat placid track at Grout park, the Knights openers Raj Ardham and Nandakishore Krishna came out on a mission to gun down the Highlanders bowlers. Setting the mission up front was Raj Ardham who dispatched Ashok Adikoppula the Highlanders opening bowler, to a huge six over long-on in the second ball of the game. Shots fired. Ashok didn’t relent. He came back and bowled a perfect bouncer. Raj went after the ball but narrowly missed it. But his intention that he was there to take on the bowlers was conveyed.

On the other end was Nandakishore Krishna who used his supple wrists and bottom hand to great effect and played some brilliant shots lofting bowlers at will. When the ball was full and straight, he lofted it over mid-on, when it was slightly outside off, he went over extra cover and when it was on the legs, he played his trademark helicopter like flick. But the best of them all was the pull short that he played against Ashok Adikoppula’s half tracker. The ball just flew off his bat for a huge six. In a cameo that lasted 24 balls, Nandakishore scored 32 runs that included four beautiful boundaries and a six, and was out to an excellent catch at sweeper cover by Varun Penmatsa. Highlanders was relieved to see the back of him but the worst was yet to come as the Knights continued to keep their foot on the gas. Vamsidhar Varmakonda played a run-a-ball 15 that included a huge straight six off Hariprasad Amanapu.

Jayaram Manukonda played an aggressive cameo of 20 that included a huge six thru midwicket and Ranadheer Sammetta added the finishing touch, scoring a nine-ball 15. Giving all the batsmen company on the other end was Raj Ardham who stood like a rock and held the innings together. Standing tall with a Steve smith like Stance, Raj scored majority of his runs thru the leg side. Despite the hot and humid conditions, Raj ran hard putting pressure on the fielders thus converting many singles into doubles. He used his sweep shot to great effect against the spinners especially against Sridhar Mahendrakar, the Highlanders skipper, who was repeatedly tossing it up and goading him to take the aerial route. Raj obliged him by audaciously sweeping him for a huge six over midwicket. In an innings that spoke volumes about his determination, Raj’s 73 was studded with nine boundaries and two huge sixes. The Knights made a mammoth 186 in their 20 overs. For the Highlanders Shoaib Hassan picked up three wickets while Sridhar and Hariprasad shared one wicket apiece.

Chasing a stiff target of 187 to win the championship, Highlanders promoted the hard-hitting John Florent to open the inning along with Varun Penmatsa, with the sole aim of going after the Knights bowlers in the power-play segment. But the momentum was completely in favor of Knights as they continued to have a stranglehold on the game. Hareesh Atluri, whose bowling action is remarkably like that of Debasis Mohanty, the prodigious swing bowler from Odisha, India, continued his fine wicket taking form as he cleaned up the top three batsmen of Highlanders in no time. First he picked out Varun Penmatsa; caught at slip with a beautiful out-swinger, and in his very first over. Next he removed the dangerous opener John Florent, who miscued a full-length out-swinger only to be caught by Dhairya Dixit. Finally, he deceived Hariprasad Amanapu, the Highlanders batting mainstay batsman, with a slow ball to be caught at cover for a simple catch. Viraj Patel then came on to bowl and cleaned up Highlanders skipper Sridhar Mahendrakar and Naveenan Thiagarajan in the same over.

Shoaib Hassan, who was all the while watching the wickets fall at the other end, then tried to hit Srinivas Reddy out of the park but only managed to sky the ball and was out caught at long-off by Dhairya Dixit, who pulled off a stunner. In a matter of seven overs, the heart of Highlanders batting unit collapsed trying to shift the momentum in their favor. The only solace for Highlanders was the batting effort of Vishal Sridhar who applied himself and scored a valiant half-century, his first of this season. Coming in at number 7, Vishal played proper cricketing strokes on both sides of the wickets and timed the ball so sweetly that some of the shots were pleasing to the eye. Particularly worth mentioning is the over the top drive that he hit over extra cover and the lofted six through the long off region. He remained not out till the end, scoring a fighting 57 from just 35 balls. His inning included eight boundaries and a huge six. 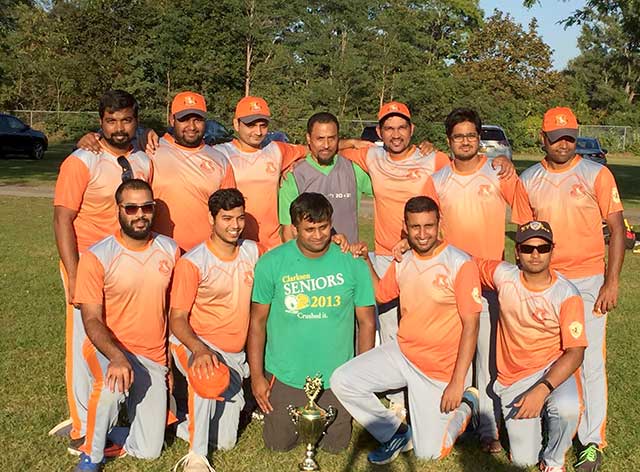 Highlanders poses with the runner-up trophy

Highlanders made 130 at the end of their 20 overs losing the final by 56 runs. For the Knights, Hareesh Atluri picked up three wickets, Viraj Patel picked up two wickets, while Srinivas Reddy and Arun Ghanta shared a wicket apiece.

For his brilliant pressure soaking innings of 73, Raj Ardham was adjudged the Man-of-the-Match. Four members of the Schenectady City Council, Leesa Perazzo, Marion Porterfield, John Mootooveren and Karen Zalewskiwildzunas presided over the game and presented the winner and runner-up trophies. The City Council members were impressed with the way the league was organized, and congratulated the Knights and Highlanders for making it to the championship final. Raj Ardham, the Knights skipper collected the winner’s trophy on behalf of his team, that was eagerly waiting to pop the champagne. Raj told the audience that it was a strong team effort that pulled them across the line and to win a final in such dominant fashion. He spoke of the incredible effort that his boys put in.

Sridhar Mahendrakar, the Highlanders skipper, collected the runner-up trophy on behalf of his team. Sridhar said he appreciated the great effort of his boys, conceding that they lost to a strong batting performance from the Knights. With so many incredible memories collected throughout the season, the 2017 T20 Electric League finally came to an end.