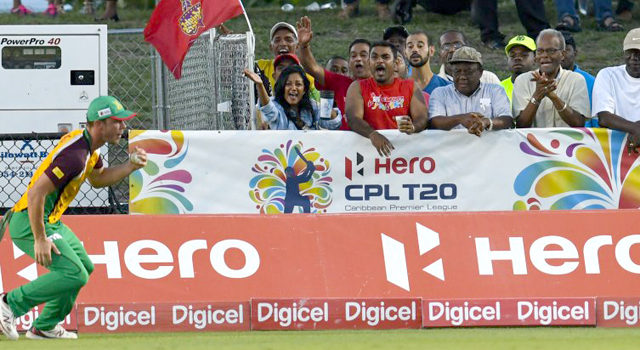 Lauderhill Economy Boosted To Tune Of $12.5m From Hero CPL

With the addition of Central Broward Stadium in Lauderhill, Florida, the staging of the final round of pool matches, which were held between 28-31 July, helped generate a $12,583,246 boost into the wider Fort Lauderdale economy.

The Florida swing of matches marked professional cricket’s first official entry into the United States of America, and saw in the region of 30,000 fans descend on Lauderhill which indicates that playing a select number of games outside the Caribbean has proven to be a success. Tourists who attended these matches also spent $4,751,872 in the local economy.

Commenting on the announcement of the economic impact made by the Hero CPL, Mayor Richard J. Kaplan said: “It is very encouraging that the success of cricket in Broward County, as we have always believed it would be, is more than possible.

“This report only confirms that what we thought all along is true. Cricket is in fact a real economic engine for us.  Cricket is meaningful to our residents as a sport, pastime, and our economy. We look forward to more cricket in 2017 and hopefully a return of the Hero CPL next summer!”

Mr. Pete Russell, COO of the Hero Caribbean Premier League, added: “The 2016 season was a landmark one for the Hero CPL and we were delighted with the positive feedback and engagement from Broward County, Fort Lauderdale and wider American and Caribbean diaspora who travelled in their thousands to Central Broward Stadium to support the four days of matches.

“We believe that cricket can make a significant footprint across the USA over the coming years and we are grateful to the International Cricket Council (ICC) and all of the local tourism and government bodies for their support in helping us make history.”

The Hero CPL commissioned SMG Insight/YouGov for the third successive year to conduct an Economic Impact Assessment (EIA) of the Hero CPLT20 Tournament which took place between 29 June – 7 August 2016.

The purpose of the EIA was to assess the Total Economic Impact for the Caribbean economy of staging such a high profile and successful event across each of the six Caribbean host countries, as well as Florida, as a direct consequence of hosting the event.

Independent research analysis was carried out at each of the venues with 15,399 attendees participating covering a range of topics based on the value of their visitor spend and length of stay in each specific country.

This year marked the fourth edition for the biggest party in sport, and the figures released on Tuesday, 6 December made for positive viewing and wrapped up a fine year as the Hero CPL has firmly established itself as the number one sporting event in the Caribbean.

The EIA is measured by multiples of three key areas; spend by the organisers and tournament suppliers, visitor spend on transport and accommodation and media value during TV and digital media Broadcasts.

The economy of finals host St. Kitts & Nevis was the most notable winner overall and the combined total included the organiser spend plus the visitor spend multiplied by the media spend to make the total economic impact figure. This helped the Federation generate an economic value of over $22,722,350 over the course of the four home St. Kitts & Nevis Patriots’ pool matches in Warner Park, Basseterre, as well as the finals week itself, highlighting a significant windfall for countries who host the finals.

2016 HERO CPL ECONOMIC BREAKDOWN
BARBADOS: The total economic benefit for the Barbados economy was the second highest arising from this year’s tournament, with $15,878,628 overall pumped into the island. There was a 22 percent increase by the CPL organisers to $1,709,585 from last year, while the visitor spend was $1,661,382. The shirt sponsorship deal with Barbados Tourist Board helped the island generate $7,788,308 in media value, marking a considerable 128 percent increase from 2015. With a TV audience of 13.8 million for Tridents’ home matches, in all 24,730 fans attended matches in the Kensington Oval, Bridgetown during the 2016 season.

GUYANA: The Guyanese economy reaped a $15,447,309 windfall from the staging of its four pool matches in Providence Stadium in 2016, with the total contribution from the Hero CPL amounting to $1,200,408. The overall visitor spend for the 2016 runners up was fractionally down by 4 percent to $2,306,392, however there were gains for the Guyana Tourism Authority whose shirt sponsorship deal has almost trebled its media value since 2014 from $2,123,005 to $5,978,951 in 2016. Hosting CPLT20 in Guyana created 349 local jobs and filled 2,295 hotel room nights. With a combined TV audience of 9.23 million for the four Guyana Amazon Warriors’ home matches, in all 50,304 fans attended matches at Providence Stadium during the 2016 season.

JAMAICA: In total, the island of Jamaica benefited to the tune of $11,151,017 from the staging of this year’s Hero CPL pool matches in Sabina Park, Kingston. The total spend by the organizers was $1,661,721, while the visitor spend as a result of fans travelling to and within the island increased by 25 percent this year to $2,984,536. The Tallawahs, led by the charismatic Chris Gayle, regained the title they had previously won in 2013. Hosting CPLT20 in Jamaica created 335 local jobs and filled 3,085 hotel room nights. With a combined TV audience of 23 million for the four Tallawahs’ home matches, in all 43,068 fans attended matches at Sabina Park during the 2016 season.

LAUDERHILL, FLORIDA: The 2016 tournament was a landmark one for the Hero CPL as it embarked on an ambitious inaugural foray into mainland USA. In all, six matches were hosted in Central Broward Stadium which generated $12,583,246 into the local economy. The Hero CPL invested $1,668,151 with the combined visitor spend of $4,751,872 being the highest in this year’s tournament overall with in the region of 30,000 descending on Broward County internationally as well as from as far north New York, especially, and as far west as Texas and Los Angeles. With a TV audience of 12.7 million for the matches in Central Broward Stadium, in the region of 30,000 fans attended all six matches during the 2016 season.

ST. KITTS & NEVIS: Despite the Patriots’ failure to reach the knockout stages, there were significant economic positives for Hero CPL finals hosts St. Kitts & Nevis. The cumulative economic benefit to the local economy arising from the staging of the finals amounted to $22,722,350, making it the significantly highest beneficiaries from the 2016 competition. The investment by the CPL amounted to a 22 percent increase to $1,664,540, while the total visitors spend saw a 12 percent increase from the 2015 season to $3,690,911. The media value from the eight combined matches (factoring TV and digital brand exposure, tourism imagery and verbal mentions) jumped by 70 percent to $8,262,632. Hosting CPLT20 in the Federation created 240 local jobs and filled 3,899 hotel room nights. With a combined TV audience of 37 million for the four Patriots’ home matches and the Hero CPL finals, in all 35,124 fans attended matches at Warner Park during the 2016 season.

ST. LUCIA: It was a positive year for St. Lucia, on and off the field, with the Zouks reaching the Hero CPL finals for the first time. In all, the total economic impact was $10,893,052 with the investment by the tournament organizers amounting to $1,641,143. There was a substantial 36 percent increase on the total visitor spend throughout the island while the media value and tourism board exposure increased by a staggering 107 percent, helped by a shirt sponsorship deal with the St. Lucia Tourist Board. Hosting CPLT20 in St. Lucia created 261 local jobs and filled 2,237 hotel room nights. With a combined TV audience of 9.4 million for the four Zouks home matches, in all 25,962 fans attended matches at the Daren Sammy National Cricket Stadium during the 2016 season.