By Ravendra Madholall in Toronto
Former Guyana under-15 left-arm spinner Dennis Legay has expressed total enjoyment following the completion of the cricket season several weeks ago in Canada. 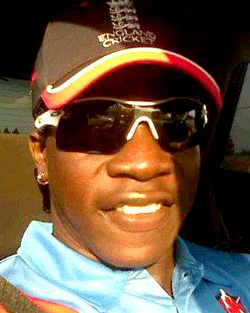 Representing Islanders Cricket Club in the Toronto and District Cricket Association Elite limited-over tournament, the enthusiastic Legay churned out some impressive performances while he also made a fine impression for Calypso Kings Sports Club in the Brampton/Etobicoke 50-over competition.

The 26-year-old plied his trade for the second successive year in North America and maximized on the opportunity to enhance his cricketing skills as he hopes to wear his country’s colors soon at the highest level.

The left-handed batsman, who featured in eight games for Islanders but only, snapped up 13 wickets satisfactorily scored over 240 runs while he was more dominant in the other aforementioned League with considerably pleasing success.

He accumulated over 300 runs with a highest score of 91 while he grabbed 21 wickets from seven matches to help take his team to the knockout stage. His best bowling figure of 5-36 from his allotted 10-overs also underlined Legay’s bowling talent and one of his highlights here.

“Yes, I definitely enjoyed my cricket once more in Canada; the competition was great and playing in these two Leagues gave me a lot of confidence now to play for my country at the senior level,” Legay disclosed.

No doubt about Legay’s favorite cricketer would have been distinguished left-arm spinner, Daniel Vettori, a former New Zealand remarkable skipper. According to Legay, he really admires Vettori not because of his resounding accomplishment on the international scene but his style and bowling characteristics.

In 2005 when Guyana participated at the West Indies Cricket Board regional youth tournament held in Trinidad and Tobago, Legay had the honor of leading the South American side to victory with an attractive figure of 4-21 off 8 overs, a game that he vividly recalls to be his best.

“I enjoyed my career for Guyana in that match against Jamaica and I really want to make it back at the highest level; I know is hard work and commitment but I am eager to do it soon; I am heading back home to play first-division cricket and I would try to catch the selectors’ eyes,” Legay declared.

At a very young age, Legay began his club cricketing career with Malteenoes Sports Club, a club that is based in Guyana’s capital, Georgetown. He then left in 2010 to represent Guyana Defense Force in various divisions.

Since 2011, a buoyant Legay has been a regular club cricketer in Trinidad and Tobago. Earlier this year, Legay turned out for Monroe Cricket Club in the National two-day League competition and performed creditably. He stated his experience in the twin-islands republic has been very good so far and will continue to represent the club again in 2016.

The comparison with Canada is below and rated Trinidad’s cricket to be very competitive and professional and that is why he will use every possible opportunity to upgrade his game with the ultimate aim of playing for West Indies too.

Legay is very thankful to a large number of individuals who have played an important role so far. On a pinpointed note, he is very grateful to former Guyana all-rounder Neil Barry who is an active member of Malteenoes while another ex-Guyana player Roderick Lovell came in for praise as well among others.

In Canada, Legay also thanked his club mates while he echoed similar sentiments to Masters Cricket Club, a team that featured in the 2015 Ontario Softball Cricket league 20, 15 and 10-over tournaments.