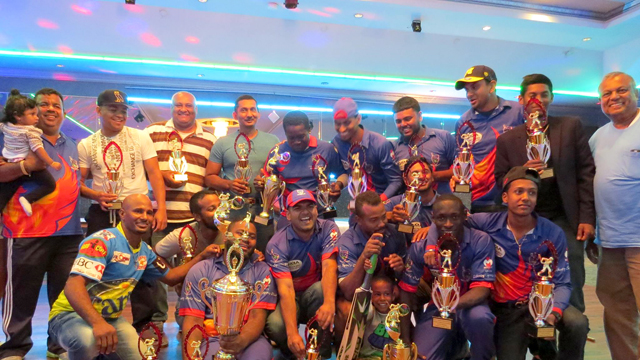 By Sam Sooppersaud | Scorecard
I have been going to the Baisley Park Cricket Field, fondly referred to as “The Cage,” and located at Foch Boulevard, Queens, for over twenty years; both as a player and a spectator. I have witnessed some very exciting matches, and have myself been involved in some exciting games. But, in all my two decades of visiting that venue I have never seen such a large amount of fans watching a game there. The place was just jam-packed. I cannot, justifiably, give you a head count as to the amount of fans who showed up to watch the 2015 EACA Cricket Zone 40-Overs final.

I arrived at the park about 10 minutes before the 12:00 Noon scheduled starting time. All I could see was people. The stands on Foch Boulevard was full to capacity. Hundreds of spectators were lining the outer fences along the boulevard.  Around the corner, on Long Street, all the seats on the benches were taken. There was standing room only. Tents were erected in the baseball dugout on the northeastern corner of the field. The “Dada and Shivnarain stand” adjacent to the handball courts were packed, with its usual occupants: Dada and Shiv, and Ralph, and the other regulars. The sidewalks along the western fence of the field were just as crowded with eager cricket fans.

Andre Kirton knock of 87 from 36 took the game away from Big Apple. Photo by Shem Rodney

What was the occasion? It was the Final of the Eastern American Cricket Association’s Cricket Zone 40-Overs Tournament. The “combatants.” Division leaders Liberty Sports Club and second seeded Big Apple Cricket Club. These two EACA cricket “giants” had clashed twice during the season, with a victory each over the other. Big Apple had tasted championships twice, while Liberty was vying for its first championship trophy. The atmosphere was tense. An exciting game was expected.

With regards to the field; although not high, the grass could have used some manicuring. After all, it was a championship game and the EACA executives should have used their good offices to get the grass cut by the NY Parks Department. Apart from this downer, all other components were electric. Two of the premier umpires on the NY cricket scene were officiating; the well-known and respected Steve Kalloo, and the President of the United States of America Cricket Umpires Association Fitzroy Hayles.  James Manbahal of Bahal Customs Homes, being the sponsor of the game, had ensured that there was enough food and drinks, and other “sundries” to keep the fans “happy” and interested.

All that was needed to complement the setting at The Cage was a competitive cricket match. Did the fans get that sort of a game?  Read on… Big Apple won the coin toss and immediately asked Liberty to take first knock. Their reason… there was some rain during the previous evening, followed by a slight drizzle the morning of the game. The outfield was damp, and of course, the grass had retained some of the precipitation. Any cricket pundit would tell you that the cricket ball would not be racing to the boundary ropes, unless hit on a fly. The playing surface, not covered, had taken in some drenching. Though it had dried out some, it was still not conducive to comfortable batting. The atmosphere was sort of “heavy”. This was enough reason for the Big Apple skipper Zaheer Saffie, to insert Liberty to bat first.

From the very first ball bowled it was apparent that Big Apple’s call to field first was justified. The ball was moving appreciable. A few balls crept low. All that was needed to further justify Big Apple’s call was the fall of a Liberty wicket. This occurred almost immediately at the start of their inning. With the score on nine, and on the last ball of the second over, opening bat, Romeno Deane went, caught off the bowling of former Guyana national speedster Kevin Darlington. Apart from Trevor Henry (44), wickets tumbled, all around. By the end of the 26th over Liberty was in trouble, as the fans would say. They had lost six wickets for the paltry score of 91 runs. One fan remarked that, “like we going home early today.” Another fan retorted, “We better go watch the other finals at the Pond”. (A Commonwealth Cricket League final was underway at the adjacent Baisley South Cricket Field).

Well, true to the prediction of the first fan, the large crowd was afforded the opportunity to “go home early,” although hundreds of fans remained after the game to celebrate with their favorite team, or just to celebrate. A cricket festival was in progress, so why go home early!  Winning and losing fans, all had a splendiferous time. Although the game was over there was enough food and drinks to keep the “happy” fans on a “high”. 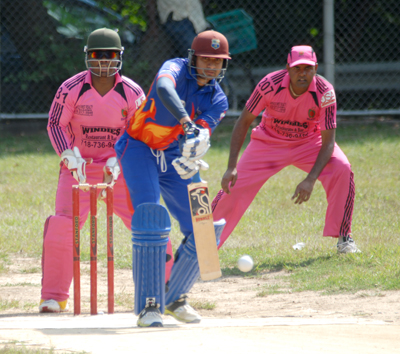 Now, back to the game: with six wickets down and less than 100 runs on the board (6 for 91), skipper Deonarine was doing his best with the bat to keep the Liberty innings from crumbling into further disarray. He was simply prodding his way along. Then came a welcome change in the tempo of the game. Some excitement, at last, for the fun-starved fans. This was in the form of Andre “Rusty” Kirton. He walked out to the wicket with his usual, unsmiling, bellicose-looking demeanor. And, he was just that. Bellicose. By the time he was caught, on the 36th ball he’d faced, he had bludgeoned the bowling attack for 5×4’s and 8×6’s. His 87 runs, along with 33 by his skipper put some respectability back to the Liberty score sheet. The 7th wicket partnership of Kirton and Deonarine, yielded 115 runs. From 206 for 7, Liberty fell for 225 all out, in 38.1 overs. They did not bat their full complement of overs, a Cardinal sin in the limited over format of the game.

From a posture of total dominance, Big Apple now found themselves facing an uphill battle. With the wicket playing unpredictably, the outfield still slow (there was yet another drizzle which caused a 15 minute delay), Big Apple was required to score 226 runs for victory and their third championship. This was revised to 219 1n 37 overs, due to the rain delay (Duckworth/Lewis formula being applied).

Needless to say, the scoreboard pressure coupled with the disappointment of “giving up a super advantageous position,” resulted in a further down spiral of the Big Apple effort. They were bungled out for 69 runs. A total annihilation of their star-studded batting machine. Liberty had won their maiden championship in the EACA 40 Overs Tourney.

Prior to the start of the game a moment of silence was observed in memory of the 9/11 tragedy. One of the victims of that disaster, Nizam Hafeez, played for ACS/Everest in the EACA. After the game the presentation ceremony was held and the various trophies and awards were handed out.

It was a “good” day of cricket for the fans.  Although the cricket itself was disappointing, most of the fans had a great time with their friends, eating and drinking and, of course, talking cricket.