By Sam Sooppersaud | Scorecard
It was fireworks in “The Cage” in August!  Macy’s did a great job of entertaining New Yorkers and visitors to the city with their spectacular fireworks show over the East River on July 4th. But Terence Madramootoo thought, “what the heck I’ll put on my own fireworks show in August.” After all the cricket park was packed with cricket fans taking in the meeting of two of the best teams in the Eastern American Cricket Association. The sentiment must have been, let’s provide them with some entertainment, and give them something to cheer about! 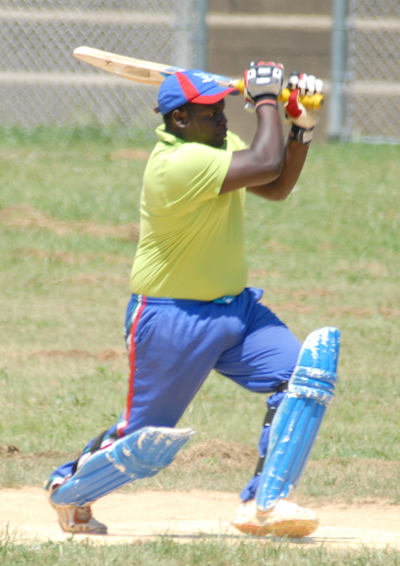 The game: Liberty Sports Club vs. The Big Apple Cricket Club. Sunday, August 9, 2015, at the Foch Boulevard cricket field fondly referred to as “The Cage.” Fans came out to the ground early wanting to get the choice seats. Some brought along their portable seats, others, probably the chairs from around their kitchen tables. Others sat on the concrete abutment lining the south western side of the field. Of course, the more reserved sat in the pavilion (bleachers) adjacent to the field, and on the northern side of the field beyond the boundary, next to the handball court, fondly called The Dada Stand, where a group of more than 25 fans made themselves comfortable on park benches. Of course they were enjoying some, let’s say, “Invigorating cold liquids.” I’ll leave the description of the liquids at that!

When I reached the park the game was underway. (I had to make a previous stop at another cricket park). Big Apple was taking first strike. Dominic Rikhi and skipper Zaheer Saffie were at the middle facing up to the Liberty bowlers. A check with the scorers disclosed that the batting side had lost one wicket. The score was 67 for 1 (Richard Ramdeen, 14, caught in the ninth over with the score on 50.

The pair of Saffie and Rikhi put on a show of classic batting. Of course, what is Saffie known for? His batting style, his timing, his caressing of the cricket ball, his punishment of the short ball. Dominick emulated his captain well. His driving was “poetry in motion”. He “took” the ball out of the wicket-keeper’s glove with precision in executing his late cuts. Together they pounced on all the bowlers put up against them. Liberty used seven bowlers in the effort to dislodge the two settled-in batsmen.

With the score board showing 163, Saffie (67) attempted another lofted shot over extra cover. The ball took the leading edge and offered a skier, which was gratefully accepted. Big Apple 163 for 2 wickets. Rikhi was joined by D. Hector, who’s first scoring shot was a bomb over the ropes – a maximum. His second, a straight drive for a boundary. Hector, along with the classy Rikhi, continued to pile up the runs for their team.

The partnership was worth 76 when Hector (67) fell. He hit 4×6’s and 6×4’s in his stay at the wicket. Rikhi remained at the batting crease for nearly the entire inning. He was out attempting a grandiose shot to the penultimate ball in the 40th over. His ton – 113 runs – consisted of 14×4’s and a single maximum. The Big Apple inning closed at 292 for 5.

Of the Liberty bowlers, the more successful were Andre Kirton 2 for 54, L. Mohabir 2 for 42, and Terence Madramootoo 1 for 47.

Set to attain 293 runs in 40 overs (7.3 run per over) for victory is definitely a Herculean task. In fact I overheard a fan who made a comment; or rather asked the question, to no one in particular. “Dey gonna bat or dey gon just give up the game and go home?” 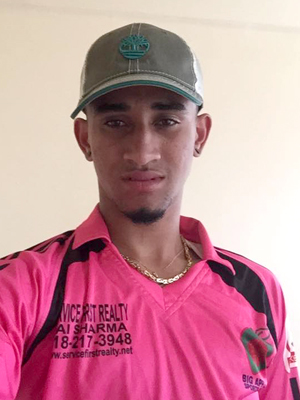 Dominique Rikhi of Big Apple also got a ton.

No Siree, they did not give up the game and go home. They took up the challenge. Romeno Deane and Francis Mendonca walked out to the middle to commence the mammoth run chase.  Big Apple opened their bowling with the slow right arm spinner Mark Gomes.  The first ball was dispatched by Mendonca to the boundary ropes. The same treatment was meted out to the fourth ball. The batsman attempted his heroics one time too many, and offered a catch which was accepted. Liberty 8 for 1 at the end of the first over.

The second wicket partnership of 57 between Deane and T. Henry put Liberty right back on track. This was ended when Deane literally ran himself out going for an impossible second run. Triston Carmichael did not last long. Henry and new batsman in, skipper Deonarine (28) added another 33 runs to the total. With the fall of Henry’s wicket (59) It was “Trouble for the Apple,” because guess who walked out to the middle, none other than Terence “Coolie boy” Madramootoo.

First ball he received went flying to the deep mid-wicket boundary. The second ball was deposited in the handball courts next to the Dada Stand. He announced himself forcefully. Sixes and fours kept coming from his bat. He spared no bowler. All felt his wrath. Deonarine gave good support to “Coolie boy” taking the singles and giving the strike to Madramootoo who was in a destructive mood with the willow. The pair added an invaluable 58 runs for the fifth-wicket partnership.

Here I am going to quote from my last article: “It is a truism that catches win matches. Failure to take catches offered contributes to a check in the losing column. This is exactly what happened. The Big Apple fielders gifted the destroyer Madramootoo three “lives.” He was dropped with his score on 37. He offered another catch when on 45. Not taken. Then again at 67 he mishit a ball which skied to long-on. The catch was bobbled. A fan shouted to Madramootoo, “Like today is your birthday.”

By the time Madramootoo hit his final six to clinch victory for his team, he had amassed 133 runs. This included 7×4’s and 12×6’s. A masterful batting performance. Had the catches he offered being taken, what would one have supposed would have been the result of the game? We can all contemplate: “if only…”

The cricket fans were the bigger winners. They had watched a gem of a game. They saw batsmen tearing into bowlers. After all cricket is a batsman’s game as far as the spectators are concerned. Together, Big Apple and Liberty hit 18×6’s and 26×4’s. It was a feast of a cricket game for the fans at the ground.

Big Apple employed six bowlers in all to stem the flow of runs. They all received like treatment. Mark Gomes 1 for 78, Telston Johnson 0 for 49, Zaheer Saffie 2 for 49, Dominick Rikhi 1 for 48, Shiv Raghubar 0 for 46, and Richard Ramdeen who’s only over cost him 20 runs.

When Madramootoo walked in to the stands, Basil Butcher, Jr, congratulated him, and rhetorically inquired, “A number 11 batsman hit a century?” Basil was making reference to the Berbice vs. Demerara final in the Guyana Inter-County Tournament, the day before. Berbice needed some quick runs to surpass the Demerara total and Madramootoo was in the Berbice lineup. Although it is well known that he is a fast scorer, he was relegated to the #11 batting spot by the Berbice think tank.

The competition plays on. Come out and watch…see who will eventually be the winner of this year’s EACA Cricket Zone 40 Overs tournament.