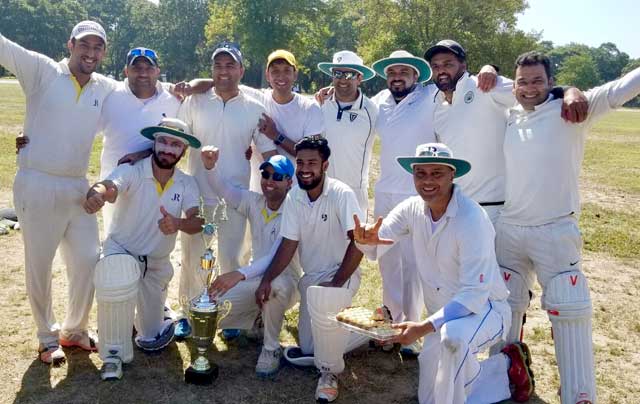 The 2017 Commonwealth Cricket League (CCL) Morning Division season ended last Sunday when Long Island Lions and Elite Cricket Clubs met in the final encounter at the beautiful Heckscher State Park on Long Island, NY. After a really hard fought season and beating a lot of solid and higher seeded teams during the playoffs, Lions and Elite were certainly pumped to give it all to win it all.

Hosts Elite CC won the toss and elected to bat first. The first time finalists seeking to draw first blood lost a few early wickets, thanks to some really good swing bowling by Rishi Rawat who took 3 wickets for 33 runs in his 6 overs. Rishi was well supported by others in keeping the pressure on from both sides. Spinner Ashish Kumar also rattled the Elite middle order taking 3 wickets for 23 runs in his 4 overs. Due to the disciplined bowling effort from Lions, Elite CC could only manage 144 in 27 overs before getting bowled out.

In return, LI Lions got off to a flying start with in-form opener Abhishek Gulati smashing 28 runs in the very first over. Elite skipper Aman Singh took charge and spun his magic around the Lions top-order, dismissing three in-form batsmen for just 15 runs in his spell of six overs. But Lions middle order which was tested in the Quarter-final and Semi-final games recently, came through again and got past Elite’s total in just 23 overs. Manish Singh (39*) and Rishi Rawat (27) was the backbone of the Lions inning. Thus, Lions Cricket Club emerged 2017 Commonwealth Cricket League Morning Division champions for the fourth consecutive year.