Long Island Titans hosted Mumbai Express in the final game of Commonwealth Cricket League 30/30 tournament at Heckscher State Park on Long Island, NY. It was a sunny day with a little breeze and a perfect day for cricket. 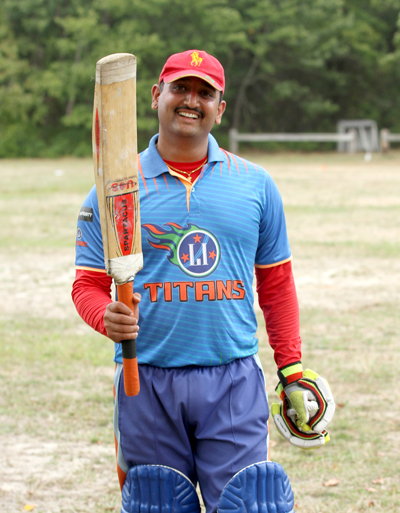 Ajith Bhaskar took the man-of-the-match award for his knock of 97 from 61 balls. Pictured above is the victorious Long Island Titans.

Defending 205 was a big task for the Titans as it was a batting pitch, but it was Dhananjay Golia who created the early break through putting a break on Mumbai Express’ track. Mushtaba Ghulam scored 66, and Bhakee scored 33, which brought the game very close, but at Mumbai Express were all out for 178. Manish Ghandi and Harsimran Nanda claimed two wickets each, with Dhananjay Golia adjudged the Best Bowler by taking 3 for 22 in 6 overs.

The LI Titans won the game to claim the Division B title, with Ajith Bhaskar claiming the Man-of-the-Match award.