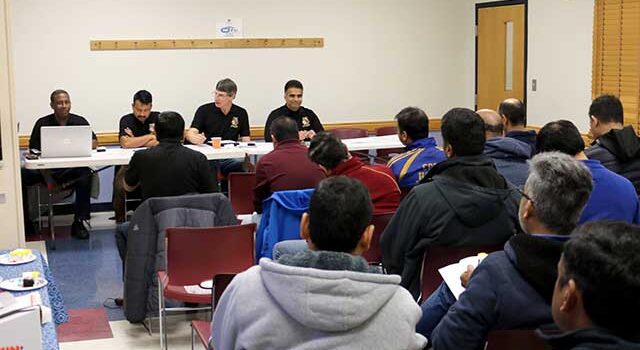 The biggest, busiest year in the history of youth cricket in Maryland was revealed Sunday at the MYCA Annual General Meeting, held in Bowie.

“This will be a year of wall-to-wall cricket,” said Chairman Jamie Harrison. “Our players will be on the field almost nonstop from April through October.”

The playing season will start with the eighth edition of the Maryland State Championship competition on April 18, with a pause on Memorial Day weekend for the Nation’s Capital Youth Championship and a beginner’s tournament taking place in Linthicum. On June 27 the state will hold its annual Championship Day, followed almost immediately by the National Youth Cricket League tournaments, held this year in Maryland, which run from July 3 – July 10. After this, Maryland is the site of the National Women’s Cricket League tournament. Then, the 30-over HCCL Summer League begins on July 18, with the Capital Youth Cricket Championship returning over Labor Day weekend. The Summer League concludes just as the pink-ball HCYC T10 Fall League launches on September 19. Whew!

And on top of this, in mid-August, the Washington Cricket Academy will be taking a hand-picked touring party to Taunton in the UK for a tour!

This season will feature more participating organizations, more teams and more players than ever before, playing on more pitches than have ever been available. It will also see the debut of a state girls leather ball team, the first of its kind in America.

Other announcements included:
• A “Maryland Cricket Game of the Week” streaming broadcast on the MYCA YouTube channel will be scheduled for every week of the state championship season. MYCA will soon be asking for audio files from prospective presenters for the broadcasts, who will be paid for their efforts.
• MYCA has started a building fund, with the intention of developing a privately-owned turf cricket facility in the future.
• The South Australian Cricket Association has donated five large plastic cricket equipment bundles for use in Maryland schools. MYCA will soon be asking for volunteers to be trained as new in-school ambassadors.
• League fees will be unchanged in 2020.
• The state will name an award after the late Rajesh Kothary.
• New participating programs this year: HCCL Huskies; Sunny Sohal Cricket Academy; Southwest Youth Academy; University Park Azaleas; SuperOver Academy.
• MYCA took in over $40,000 in 2019, and profited $4000, after expenses. Sponsorships are becoming a large factor in state revenue.
• The annual state banquet has become very popular and has outgrown its location and will be moving to a larger site in 2020.

This year, being MYCA’s 10th anniversary year, will be full of excitement and celebrations. And if the preview we received on Sunday is any indication, it will be a year to remember!