By Sham Ali
(Cosmos Celebrating 33rd Anniversary) Watch out! There is a new sheriff in town. And he comes armed with a microphone and an impressive wealth of knowledge about cricket at a very tender age of eight years old. Mathew Achaibar has been making his rounds on the local cricket scene in New York and has become quite popular in his apprenticeship behind the microphone. His distinctive voice brings an added breath of fresh air to a cricket atmosphere; one that has been silent for decades until Carl Bennett, and Leonard Achaibar decided to take up the responsibility of doing commentary  on the games at the cricket ground. They were joined later by Jamie Lloyd, and now they have added the latest sensation, Mathew, to the team.

Sandwiched between these seasoned commentators on the New York cricket scene, Carl Bennett, Jamie Lloyd and Leonard Achaibar, one has to look carefully otherwise they will miss this nashy little boy positioned smack in the center at the commentary table. His voice though radiates in innocence and purity on equal decibels as he called the shots on the cricket field. That this young man, if we can refer to him as such is years from finding his footing as an independent man in this society, yet he has exhibited an inordinate sense of maturity as he command his chair with authority given his ability articulate the actions on the cricket field, and his thoughtful exchanges with his colleagues, Daddy and Uncle Carl and Jamie of analytical insights.

But Mathew, a boy, kid, young man, whatever fits in ones comfort of reference is not your average boy his age. He is special, gifted, charmingly magnetic, well mannered, and warm. He is an excellent student in Grade 2 at PSMS 194 (yes Grade 2) and the youngest member of Cosmos Cricket Club. The club where he was born, bred, and baptized and at times told to sit quietly. He earned an award for entertainer of the year at Cosmos presentation awards for his detailed insights into cars and cricket ; he was slow in getting up to receive his award because he was very busy downloading an app on his ipad. In his few words he said, ‘thank you for this trophy, I enjoy myself in Cosmos, I have to go now because I have to finish downloading my app.’ 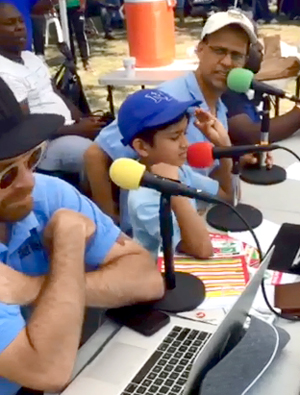 Mathew Achaibar (center) calling the game next to this dad, Leonard Achaibar (left) and Jamie Lloyd.

Well for this Grade 2 kid, the toys that fit his age group are pushed to the back on the bottom shelf. His  fascination with cricket comes a time when most boys just wants to play and felt sleepy only when mom reminds them of their homework, but Matthew seems to have his priority carefully carved out. He is a natural left hander who looks the part of developing into a good player. The thought of him bouncing around with his peers on an overload of youthful energy and hoping that the sun never sets would be a given. Caution, hold your breath on that, time at the cricket ground has a very different meaning in Matthew’s book. He once relayed to his peers in a junior schools cricket match ‘you guys come to play, I come to commentate. Take that for a thought provoking comment.

Matthew enjoys playing fantasy cricket on his iPad as well as watching International cricket. He has a good understanding of the scoring app as is evident in his analysis.  In addition to his knowledge of the game, his popularity is perhaps boosted by his ability to imitate some of the international commentators. He was influenced in part by Lenroy Whyte, who does an imitation of Michael Holding near perfection, when he sat next to him on the commentary table at the West Indies legends game in Queens. Matthew is nicknamed Danny Morrison whose imitation he does to near perfection; some will say that he is also brilliant and humorous when he does a Geoffrey Boycott’s rebuke on a poor play or a David Lloyd’s excitement on the ball sailing out of the park. He is also funny and thought provoking on likes of Shane Warne, Michael Holding, the late Tony Greg, and Ravi Shastri. His imitations of these international commentators comes to life when he makes a comparison on the action at the local level with that at an international match and describe it in the way his favorite commentators would.

Certainly Mathew got his DNA from his parents, however, his fascination with the game and influence in commentary most certainly came from his father and Carl while he bounced around the cricket scene at an early age. He came to Cosmos presentation as a baby, attended the games in his stroller, and now sits dutifully at the commentary table. He is very conversant and is full of facts. His knowledge on cars (from make, series, specs, and comparative analysis) English Premier Soccer would baffled even those who though that they were fairly equipped. But moreso, packed into that ‘little’ brain of his is a healthy does on international cricket. 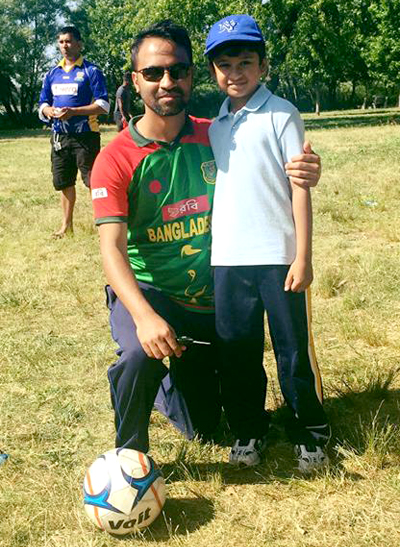 Mathew Achaibar (right) poses with Mehraz Masud, one of his many fans.

Start a conversation on cricket with Mathew at your own peril. You will be left in awe, jaw locked, and in temporary amnesia  as he reels out his cricket facts and revealed a wealth  of knowledge  from  a boy way beyond his years. Your thought of lifting this charming little boy and  a spinning him around as he his growing right before your eyes is converted into pride and admiration for him that a future looks promising, albeit you may feel a bit ‘small’ and wondering what you may have missed in your days. Whenever the phone rang for a booking for his father to do commentary, Mathew is more that happy to inform the caller that he does commentary as well; a marketing pitch. The collection made in admiration of his ability at the MCL Memorial weekend tournament may be enough for a new play station.

Though he felt ‘big’ sitting between Dad and Uncle Carl and Jamie calling the shots, there is still that little boy in him, with an ‘itch in his pants’ yearning for a snack in the middle of the commentary action or perhaps to escape the booth when he sees his friends around.

However, the innocence and charm on his face is in quite contrast to the boy with a microphone who feels like a man among the big boys at the cricket ground, and grudgingly he is one who becomes a baby in his mother’s (Nikita) arms once the sun goes down, overloading her ears of his day, talking, and talking and talking until he wakes up again.