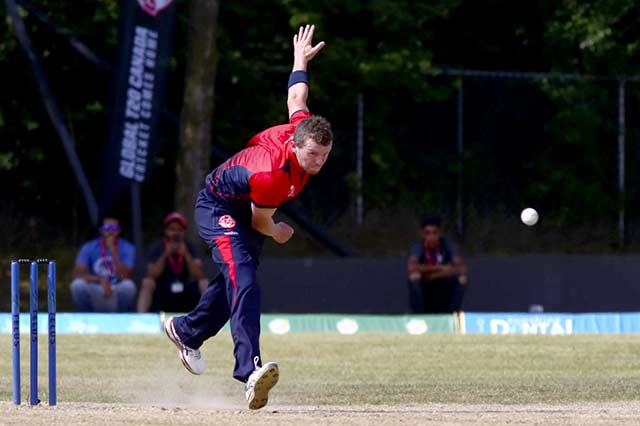 Peter Siddle was named man-of-the-match after picking up 4 for 13. Photo courtesy of http://www.gt20.ca/

By Ravi Madholall in Toronto
Montreal Tigers finally secured a victory in the first edition of the 2018 Global T20 Canada tournament on Wednesday against Edmonton Royals at Maple Leaf King City, Toronto.

The Tigers featured in their fourth match humbled Royals by 15 runs in a low-scoring affairs as nine matches completed since the commencement of the competition last Thursday.

Tigers were invited to bat first on a friendly pitch and tallied up a moderate 129-6 off the 20-overs while, Royals were dismissed for 114 in the 20th over.

Montreal Tigers will play their last game in this preliminary stage on Sunday against Toronto Nationals before start off their second-round segment where first-place will meet sixth-place. Additionally, second-place side will clash with fifth-place victor and third and fourth-place teams will compete as well from Tuesday.

Tigers’ win was orchestrated by Australia fast-bowler Peter Siddle who snagged a four-wicket haul yielding only 13 runs from 3.1 probing overs.

Siddle was also on a hat-trick during his devastated spell extracting appreciative bounces on a responsive pitch. He bowled at both ends and was admirably supported by his skipper and another speedster Lasith Malinga who finished with 2-29 from four overs. Medium-pacer Kevin Cooper also took two wickets to assist Siddle.

Luke Ronchi opened the batting and scored a top-score of 30 for Royals. He was there when his other opening partner Andre Fletcher was comprehensively bowled by 17-year-old Nepal leg-spinner Sandeep Lamichane for 9. Agha Salman (10) and Farhaan Behardien (00) felt off successive balls to leave Royals lads reeling at 35-3.

Shaiman Anwar offered some resistance to make 24 while Kevin O’Brien made 15 to be the other principal scorers.

When proceedings began on a scorching hot-sunny day, Montreal Tigers lost badly out-of-form and West Indies batsman Dwayne Smith for 08 while Sunil Narine, whose reputation as an opener has grown tremendously, followed Smith back to the pavilion soon for 09. The innings never got momentum as three left-arm pacers captain Sohail Tanvir, his Pakistani compatriot Mohammed Irfan and South African Wayne Parnell bowled with consistency.

However, Moses Henriques once again came to the fore by hitting a responsible 50 while Najibullah Zadran and Sikandar Raza weighed in with 22 not out and 20 respectively. Parnell captured three wickets for 23 runs in his four overs to be the best bowler for the losers.

Edmonton Royals will be in action on Friday at the same venue against Vancouver Knights. Royals have so far appeared in three matches but only came out triumphant on a solitary occasion. Knights currently have two wins from three matches as well.

The other three participating teams, Winnipeg Hawks are leading on the points table because of a better net-run-rate. They have two victories from three matches while West Indies “B” team is sitting comfortably at second position with two wins from as many matches. Toronto Nationals have only one win from three outings, notably.

West Indies “B” will be colliding with Hawks on Thursday from 11:00hrs when the competition continues.

Meanwhile, at the presentation ceremony, Siddle was named player-of-the-match. He also stated in a press conference that he was delighted with his performance and also seeing his team capping off a good win. He indicated that he was confident they would have won and is very optimistic the guys will bounce back hard from here to lift the trophy and pocket a cash prize on July 15.