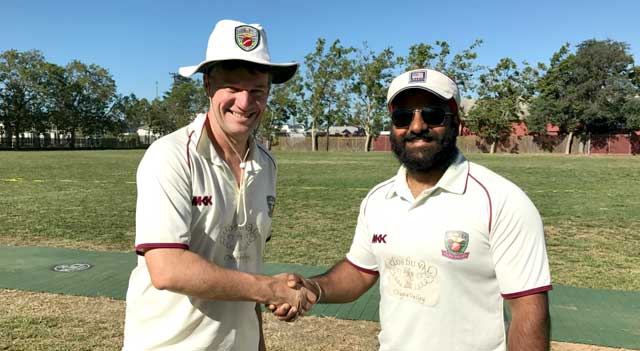 The Napa Valley Cricket Club (NVCC) inaugurated a new intra-club match recently as they played a City v County Challenge Match at the Napa Valley Expo in downtown Napa. In near record temperatures with the mercury topping 105f in the shade, the club started playing at 9:00am and shortened the match from their regular format 35 overs to 25.

“It’s always been one of my ambitions with the NVCC that we would start a different intra-club match format to complement our World Series of Cricket that is now very well established.” said NVCC president Rob Bolch. “The City v County concept is one that exists back in Australia, where I was born, and it allows for another “rivalry” match in the club that mixes the teams up differently within the club members.”

This was the first time that NVCC had played a match at the Napa Valley Expo since their move south from Calistoga so an intra-club match allowed them to test the pitch, field, and facilities at the Expo which all passed the test with flying colors.

The toss was won by County captain Bernie Peacock who, not surprisingly given the forecast heat, put the City team in to bat first. He was rewarded with early wickets as Abhijit “Doc” Adhye (two runs off six balls), Tim Kay (zero off one), and Phil Bourke (two off ten) went cheaply. Bourke did provide a foil to City batsman John Leake and allowed him to get established with the pair putting on 19 runs for Bourke’s wicket. Leake ended up with an impressive knock of 55 runs off 46 balls, a total that included (six fours and three sixes). After Bourke departed Leake formed partnerships with Rob Bolch (28 runs) and Pete Sander (48 runs). Sander himself continued his fine recent batting form scoring 15 off 10 balls watched by his young children on Father’s Day.

A captain’s innings from Chandanpreet Singh of 52 runs off 31 balls helped propel the City team to a substantial total of 190 runs from their 25 overs. Singh’s knock included seven fours and two sixes and highlighted the progress he’s made with the bat since joining the NVCC in early 2016. Singh batted out the innings with NVCC secretary Scott Curwood who himself chipped in with 19 off 25 and included one four. For the County team the pick of the bowlers were the Maqsood brothers – Moe (2 wickets for 19 runs off 4 overs) and Adersh (2 for 33 off 5) – who took two wickets each and Karan Grewal who took 1 for 30 off 5. The key wicket of Leake fell to a half-tracker bowled by Leigh Ritchie and taken well by Grewal at long on. Captain Peacock bowled economically but failed to take a wicket, as he so often does, and returned numbers of 4 for 16 and had one maiden over – no runs scored or conceded. 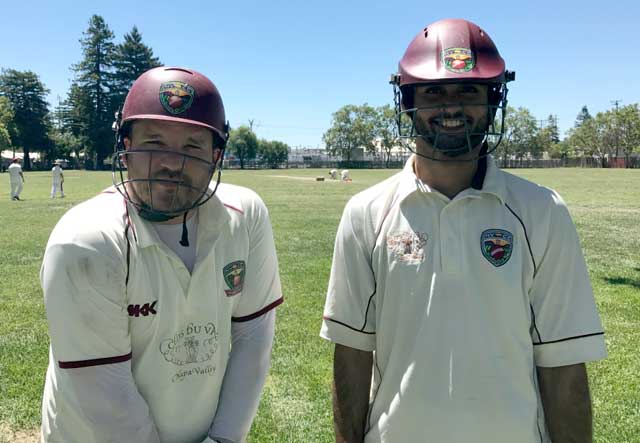 A quick turnaround saw Moe Maqsood and American born NVCC treasurer Jared Thatcher open the batting for the County team. The City team found their line and length as opening bowlers Tim Irwin and Bolch each took wickets in the first four overs. The County side were struggling to get going and it got worse as Tim Kay was tossed the ball by Chan Singh as the first change bowler. Kay unleashed a barrage of medium paced seam bowling that caused havoc amongst the County batsmen’s ranks. Three wickets for Kay (American born Pete Cameron 12 off 33, Grewal 5 off 8, and Ritchie 1 off 7) ate into the chase by the County team. Grewal’s wicket in particular was a stunner with Irwin taking a scintillating one-handed catch over his head, steps from the long-on boundary.

The fightback for the County team was led by new NVCC member Harjit Singh who had the best innings of the day – 63 off 44 – where he targeted the short deep-fine-leg boundary to great effect notching up eight fours and two sixes in a knock that almost won the match for the County team. Adersh Maqsood supported Harjit Singh well until he was undone by the tricky, and sometimes indescribable, bowling of Irishman Andrew Healy. A fine knock of 24 runs not out off 21 balls from American-born Jamie Johnson helped to add a respectability to the County chase but in the end they ran out of overs with Sander adding the prize wicket of Harjit Singh and Pete Carson in the 24th over.

“What a great match to captain, play in, and win” commented City captain Chan Singh “but the bigger picture is that this was our first match here at the Napa Valley Expo in downtown Napa. Having cricket so accessible to my family and friends who live close by is great and it was fun to have quite a few of them stop by today and see their first ever cricket match, live.”

Said County captain Bernie Peacock “I think that Rob’s idea for an annual City v County Challenge Match is a great idea and we saw today that we have some great cricketing talent in the club. Over 350 runs were scored in 50 overs and great knocks by Harjit on the County team, and Leakey and Chan on the City team meant it was an entertaining day on the field. Off the field it was just great with a few friends coming down from Yountville to enjoy the cricket.”

Next Match – Sunday 9th July, 2017 –NVCC host Bradshaw CC at McGrath Field on the grounds of Napa State Hospital from 10:30am.