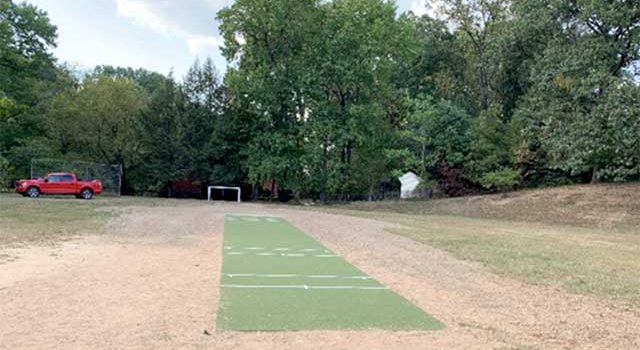 On September 22, Seth Benson-Flannery, Jason Jackson, Hank (Seth’s son), and Wesley (Jason’s son) helped paint the crease lines on the new pitch at University Park Elementary School (UPES), which is very close to the University of Maryland in College Park. Anders Pyenson and another boy also pitched in. Cricket has been flourishing at UPES due to the efforts of the physical education teacher, Christy Neff. Neff teaches cricket to her students using equipment donated by the United States Youth Cricket Association (USYCA) and the Bowie Boys and Girls Club (BBGC). She also created an outline of a wicket on the gym wall using duct tape so that her students could practice their bowling during their lunch break.

Over the years, many of the top performers at UPES were invited to join the Bowie 11U travel cricket team, which participates in the Maryland Youth Cricket Association (MYCA) state championship competition. The Bowie 11U cricket teams have won the 11U state title for five consecutive years. However, the 35-minute drive from University Park to Bowie was a huge deterrent for most parents. This year, Wesley Jackson was the first UPES player to accept the invitation and was an impact player for the Bowie-2 11U team.

The UPES cricket team is planning to enter the state championship next year. The team has already started practicing with a vinyl ball, and the batters are getting used to wearing the protective gear. This new cricket pitch will allow the team to have home games, and all the players will be able to take their game to the next level. This cricket field will be used for elementary school and middle school matches. It can also accommodate 11U travel team matches. The boundaries on the side are a little short for 12U matches with the leather ball, but 12U matches can be played there as well.

The UPES parents, none of whom knew about cricket before, have even started having their own cricket practices.

UPES Cricket Program Thrives
This year the UPES cricket program had its best season in the BEST Cricket League, where it has competed since 2015. There were always plenty of children interested in playing, and its rosters typically had about 17 players. With support from the parents and Principal Toi Davis, Neff was able to recruit 27 players and had two teams this year. The teams played a historic match against each other during school time with the entire school watching the game. Team 1 made it to BEST final and was very close to winning it all.

Even though they did not grow up playing cricket, Seth and Jason did an excellent job coaching Team 1. Team 2 was coached by Nick Pyenson (Anders’ dad), and all his players had a fun season. Parent volunteers Sheila Gupta, Kathy Zentek and Carter Hall helped with keeping score during matches.

Seth learned the basics of the game and coaching cricket from Gordon Findley. Gordon did not have any children at the school, but he dedicated his time and effort to share his love for the game with the students and parents at UPES from 2015 to 2018. During this time, Coach Gordon was well supported by the team mom and score keeper, Ann Warrick. Ann’s boys, Rico and Jayden, were two of the best players in the entire elementary school league.

Parents Partner With BBGC To Build Pitch
With a thriving cricket culture at UPES, Neff and the parents were motivated to have their own cricket pitch at the school. All previous matches and practices were done on a dirt strip at the school’s field. Some matches were played on real cricket pitches at schools in Bowie and at the home field of Metro Sports Club, which is an adult team that plays in the Washington Cricket League. Seth led the fundraising effort and set up a GoFundMe page. In less than a month, the parents raised more than $3,000 for the pitch construction. The BBGC agreed to fund the remaining $5,000 needed to complete the project.

The next step was to get the approval from Prince George’s County Public Schools (PGCPS). The BEST Cricket League is the first elementary school cricket league in the USA. The WAMS Cricket League is the first middle school cricket league in the USA. Both leagues are conducted by the BBGC. The former PGCPS CEO, Dr. Kevin Maxwell, approved the partnership between the BBGC and PGCPS to make the leagues official in 2014. After learning about the success of the cricket program, the new PGCPS CEO, Dr. Monica Goldson, did not hesitate to approve the cricket pitch at UPES.

With funds and the approval in hand, the cricket pitch was constructed without any problems. The pitch consists of a concrete slab 80ft x 10ft covered with artificial turf. This is the fifth youth cricket pitch built by the BBGC. The first three were built at Rockledge, Whitehall, and Kenilworth Elementary Schools in Bowie in Prince George’s County. The fourth one was built at Faulkner Ridge Center in Columbia in Howard County.

Prince George’s County continues to set the standard for youth cricket development in the USA and shows what is possible.