New York Cricket And Politics Off To The Races 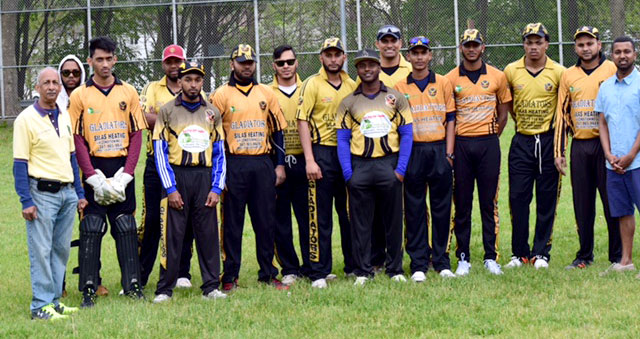 By Sam Sooppersaud
The (adult) Boys of Summer are back in the park! That is, the senior cricket leagues in the New York City area have commenced their 2017 season. The youngsters in the Public Schools Athletic League started their season on April 1st. However, the first week of scheduled games were a wash-out; Mother Nature did not cooperate.

On Sunday, May 7th, the Eastern American Cricket Association (EACA), along with the other cricket leagues in this area, commenced its 40-Overs Tournament, with several games at the various parks used by that league. The EACA utilizes parks in Queens, Nassau, and Suffolk counties for their games. 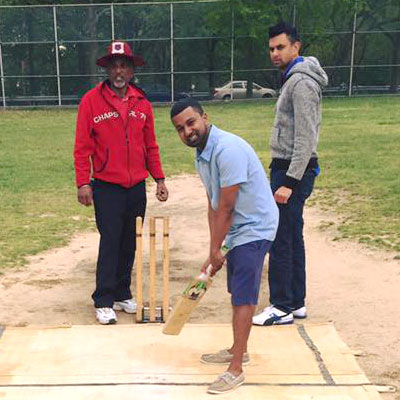 New York City Council District 28 candidate Richard David seen with the bat at the game between Gladiators and Richmond Hill/Liberty.

One such opener was played at the Baisley Park North Field – fondly called “The Cage”.  The field is surrounded by an 18-foot high chain link fence. Hence its moniker. In that game, the Gladiators Cricket Club took on the newly minted Richmond Hill/Liberty Sports Club.  Richmond Hill and Liberty competed as separate entities in 2016. Due to dwindling membership, coupled with the scarcity of good, raw talent, they have joined together to create a more formidable roster.

Perennial EACA president Rudy Persaud, along with his league officials, were among the 60 people gathered at the wicket for an impromptu opening ceremony. The symbolic “First Ball” was bowled, rather “pelted” by Mr. Richard David, a NY City Council candidate, vying for the Democratic Party’s primary in the city’s Council District #28. This district includes Richmond Hill, South Ozone Park, and Rochdale Village. The other candidates are Alan Jennings and incumbent, Ruben Wills. Mr. Danny Khan, newly elected President of the United States of America Cricket Umpires Association, was the batter.

According to Mr. David, the Republicans do not contest this predominantly Democratic Party district. Whoever succeeds in the primary is assured the Council seat in the elections, there being no other candidate. The Elections are on September 12th. He expressed confidence that he “stands a good chance” of beating his opponents.

Richard David immigrated to the USA, with his parents, from Guyana (Mahaicony), while he was still a youngster. He was educated in the NYC school system. While in school he became interested in the American political system, and since then, has harbored thoughts of running for public office someday. That day is now. This is his first run for public office. Presently, he is the Chief of Staff at NYC Administration for Children Services. He once served as the Vice President of NYC Economic Development Corp. 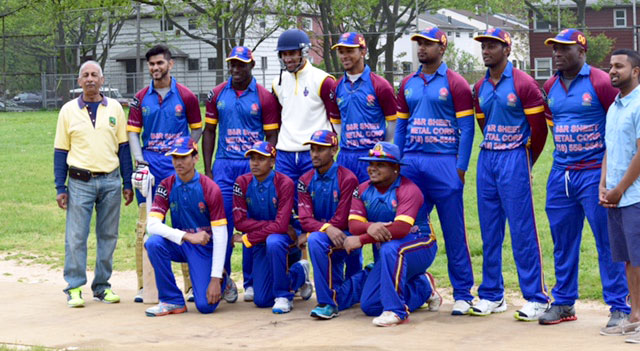 Mr. David acknowledged that most of the people standing with him on the field were of Guyanese descent.  But, he was quick to insist that his candidacy is one of inclusivity.  According to him, Guyanese make up the second largest immigrant group in New York City, yet without any elected representation. He promised to be a hard working Councilman, working for everyone in his Council District, regardless of country origin.

I encourage everyone to go out and register to vote. However, Mr. David advised that you must be registered as a Democrat, in order to vote in the (Democrat) primary on September 12th. Exercise your right, and vote.