Cricket Council USA (CCUSA) will host its first National Cricket Tournament this weekend at the Central Broward Regional Park in Lauderhill, FL, the only ICC certified ODI ground in the USA. Eight regional teams are expected in Florida to vie for a chance at becoming the first CCUSA national champion. 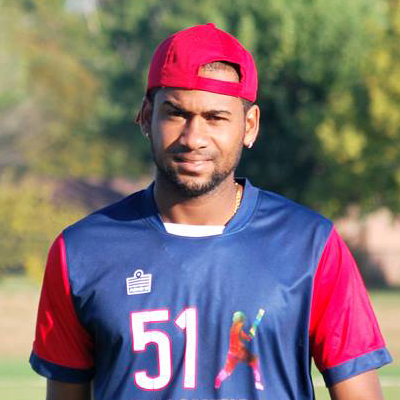 Alex Amsterdam who was recently selected in the ICC Americas Combined team will be on display at the tournament this weekend. Photo by Shiek Mohamed

A Big Apple squad has been selected to represent the New York Region and will join the other seven teams in the sunshine State for some very competitive cricket, at the national level.

The New York committee wishes to say a big Thank You to CCUSA for the interest they have shown in promoting cricket throughout the country. The national tournament initiative is a very good one championed by Mr. Maq Qureshi, President/CEO and his organization; and to have the tournament at a time when the national cricket body USACA is unable to do so, due to financial restraints.

Knowing that the players in New York would love the opportunity to play some cricket in the sunshine State, and at a time when fall has just started in the Big Apple, CCUSA’S NY Regional Director Krish Prasad, immediately formed a committee to select the New York team. The committee is chaired by Rudy Persaud, and includes Debo Sankar, Sew Shivnarain, Zafar Mohamed and Kerk Higgins.

The committee would like to thank all the sponsors for their contributions, and acknowledges that without their help this tour would not have been possible.

Best of luck to the boys; go make NY proud!