The Napa Valley Cricket Club (NVCC) went on the road again recently to play their first ever match against Bradshaw CC (BCC) of the Sacramento Area League. After a promising start in the field the NVCC were eventually beaten by 87 runs as they had no answers with the bat to the firepower of the BCC bowling attack. The game continued a theme for the NVCC in 2016 with New Zealander Martin Mackenzie again top-scoring for NVCC and another strong performance with the bat was recorded by new American member Tyler Nethaway following on from the knock in the previous game in Marin by Pete Cameron, another American member.

The match was played on the grounds of the Gurdwara Sikh temple near Elk Grove and before the game the NVCC players were given a tour of the temple and offered a traditional welcome with tea. NVCC club captain Rob Bolch won the toss and decided to have a bowl first as a way to gauge both the pitch and the caliber of the opposition. Bolch had a deep bowling line up to call on and opted to open with Adersh Maqsood and Tim Irwin. Both bowled well but the BCC openers Manjinder and their captain Havri looked strong and settled, and clubbed Irwin for 13 runs in the sixth over. That forced Bolch to change his attack and he brought the New Zealand pair of Bernie Peacock and Mackenzie into the attack. It paid immediate dividends with Peacock clean bowling Majinder just as he looked set to accelerate. Not long after that Peacock had Harvi caught by Cameron who held on to a skied ball after having dropped a couple earlier in the BCC innings. Behind the stumps for NVCC on the day was stand-in wicket-keeper Pete Carson who took the gloves and with Bolch marshaled the field well. 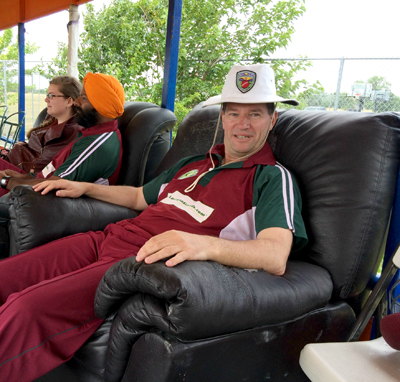 Bowling into a decent strength wind Bolch decided to take the pace off the ball and introduced Irishman Andrew Healy to the attack. Healy renowned for his slow, loopy and occasionally spinning bowling took three wickets in quick succession. He bowled the impressive looking Kulwinder through is legs on leg stump as the batsman looked to reverse sweep Healy. A plum LBW (leg-before-wicket) to dismiss Komal was followed by a good catch taken at deep square leg by new NVCC member Chandanpreet (Chan) Virk. Cameron redeemed himself for his earlier dropped catches as he impressed in the field with another catch off Irwin and a stunning direct hit run-out to account for the wicket of BCC batsman Jatinder. The BCC tail was wrapped up by Peacock and Mackenzie and NVCC managed to keep BCC to a total of 191 runs and get them all out in 32.5 overs.

NVCC went into their batting innings confident of chasing down the target of 192 but weren’t aware of the pace of the BCC bowling attack that they were about to face. Bolch sent Abhijit ‘Doc’ Adhye and Maqsood out to open. The two are solid and strong opening batsmen but they struggled to deal with the lightning quick pace of Manish and Kulwinder, the BCC opening bowlers. Adhye was gone for no score in the first over having played a defensive leading edge and was caught at short mid-on. NVCC number 3 batsman, Cameron, who played so impressively in the last game at Marin CC joined Maqsood in the middle. Maqsood was seeing the ball well and was using the pace of the bowler to his advantage by was eventually caught by the bowler off a sharp return catch. Mackenzie was next up and unusually for him strode to pitch wearing a helmet. Cameron was peppered in his short stay at the crease for no score and was unable to repeat the heroics of his recent Marin innings. A procession of NVCC batsmen came and went – Irwin (2 runs off 3 balls), Carson (2 off 18), Bolch (0 off 5) – trying to hold up the non-strikers end while Mackenzie built a solid innings.

American member, and recent cricket convert, Tyler Nethaway in only his second game for the NVCC gave Mackenzie the support he needed. Strong batting by both of them allied with good decisive calling allowed the pair a seven over period when they added 45 runs for the seventh wicket. With this pair riding out the BCC bowling there was still a glimmer of hope for the NVCC but the fall of Mackenzie in the 20th over, bowled by Taran, meant that NVCC didn’t have much left in the way of strong batting. Peacock had an eight ball innings for no score and Virk added just one in a three ball stay. Healy brought up the rear and pushed NVCC over the 100 run mark with a four, clubbed to deep square leg. Nethaway was the last batsman standing for NVCC and his 19 runs was the second highest score for the team, behind Mackenzie, and included two fours that were convincingly hit to the boundary. 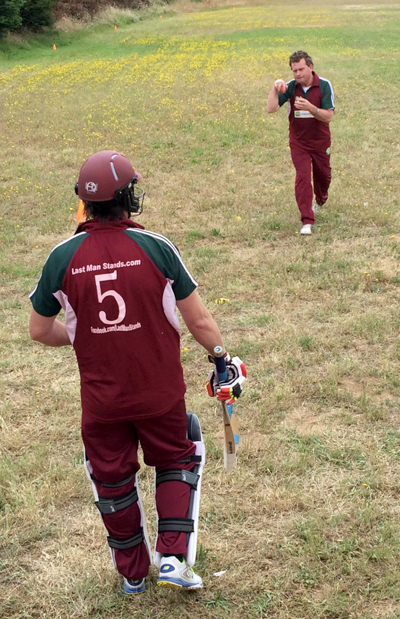 Martin Mackenzie (5) warms up ahead of his knock of 38 off 59 balls with Pete Carson giving him some throwdowns.

“We had a great performance in the field by restricting Bradshaw to a score under 200 and getting them all out in less than their allotted 35 overs” said NVCC club captain Ron Bolch “At one stage it looked like 250 was a real possibility for them. We drooped some catches but the fielding was generally really good from the boys with Pete (Cameron) in particular contributing to 3 wickets.” continued Bolch “Bern (Bernie Peacock) and Heals (Andrew Healy) worked hard for their wickets and took them for us at key times, right as the Bradshaw players were looking to really accelerate. With the bat we really struggled as we were up against a high-quality Bradshaw bowling attack, which ultimately proved too strong for us. Once again Marty (Martin Mackenzie) played a patient and solid innings and he was joined today by Tyler who did really well with the bat in only his second game of cricket, ever. It’s great to see the club’s membership becoming more diversified and if we could find a few more American players like Tyler and Pete they could look at claiming a place on the team from some of the guys who’ve played cricket for years.”

After the match the NVCC players were treated to a warm and hospitable meal by the Bradshaw CC members and others from the Sikh temple community. The NVCC look forward to re-paying the hospitality when Bradshaw travel to Calistoga to play on September 10th.