NVCC Finishes Fifth Successful Season And Looks To The Future

The Napa Valley Cricket Club (NVCC) wrapped up their fifth season recently. The season which started back in April with a tour to Scottsdale and culminated with participation in the North Bay Last Man Stands (LMS) competition saw the club play 17 games in seven months. While their on-field record of 4 and 12 (regular games 4 – 7 & LMS games 0 – 5) may seem a poor return many of the games that the NVCC played were lost by very narrow margins. Their annual season opening Napa Valley World Series of Cricket is an internal game amongst members so doesn’t count in the overall win – loss stats.

Following a narrow 22 run loss on tour in Scottsdale the NVCC opened their season locally with the Napa Valley World Series of Cricket, a game which pits NVCC members from Australia & America (AA) against members from the Rest of the World (ROW). A tight low scoring game was won by the ROW team who wrestled back the World Series trophy from the AA team having last win this game in 2014. With five World Series games played the overall score now stands at 3 – 2 in favor of the AA team. 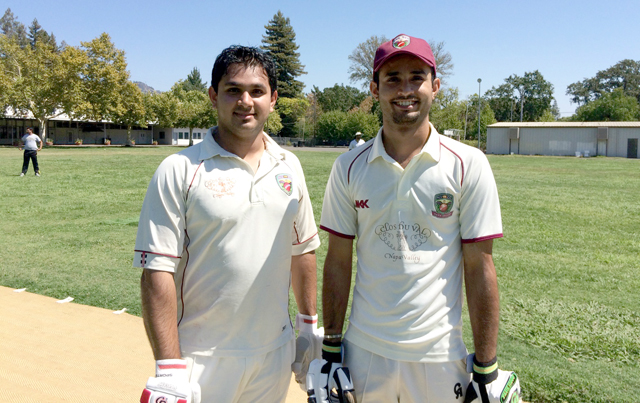 The Maqsood brothers – Adersh (L) and Moe (R) – pictured before the batting against the Sonoma Gullies. Top Photo, Kiranpreet Singh (L) Captain of the NVCC Rest of the World Team, Umpire Barry Manogaran, and Rob Bolch (R) Captain of the NVCC Australia / America team at the 2016 Napa Valley World Series of Cricket.

New to the playing schedule in 2016 for the NVCC were Bradshaw CC who play in the Sacramento Area Cricket League. A home and away series of games were won 2 – 0 by Bradshaw with NVCC putting on a brave batting display in the away fixture in May and notching up a very respectable 213 runs in the return fixture in Calistoga in September. In between NVCC won their annual three-game series against Marin Socials convincingly by winning all three games. Both games against local trans Mayacamas rivals the Sonoma Gullies went the way of the Santa Rosa based team by narrow margins. For the second year running NVCC hosted two San Francisco based teams – the Twitter Kabootars and the SF Seals. The results were the reverse of 2015 with a victory over the Kabootars (Hindi for bird) and a loss to the Seals. The win over the Twitter Kabootars was all the more impressive given they had ex USA international cricketer Saurabh Verma in their ranks.

In September and October the NVCC took part in the regional Last Man Stands (LMS) competition. A hybrid form of cricket, LMS was created to provide a quick two-hour game many of crickets traditional rules are tweaked in this format. With only eight players per team and five ball overs each innings is timed out at one hour. NVCC were well beaten in three of their five round robin LMS games but were beaten by the narrowest of margins – one run and on the last ball of the game – in two of their games. The game against the LMS Yankies played at The Fairgrounds in Calistoga was the highest scoring game of the season in the North Bay LMS league with a massive 349 runs scored with NVCC on the wrong end of a 175 – 174 score line.
Highlights of the 2016 season included two “Five Fors” – 5 wickets in one game – to Adersh Maqsood in May against Marin Socials at Piper Park and Bernie Peacock in September against Bradshaw CC at The Fairgrounds, Calistoga. While NVCC were involved in a number of high scoring games in 2016 there were no milestone “centuries” – 100 runs in one game – for any of their club’s batsmen. 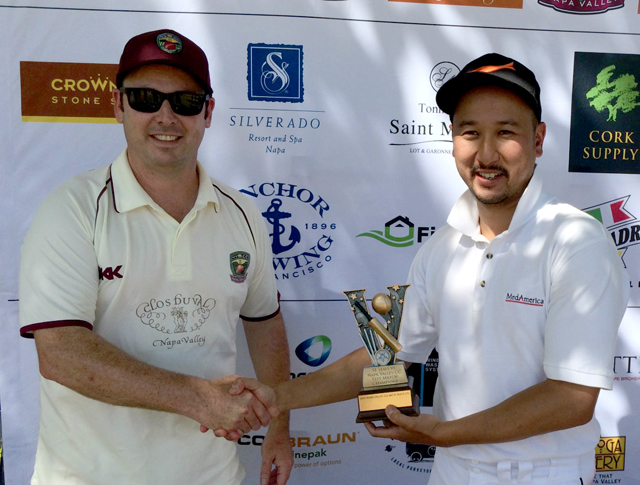 2016 also saw some notable off field happenings for NVCC with a visit to the Napa Valley by International Cricket Council (ICC) USA representatives Ben Kavenagh and Tom Evans in April. Kavenagh and Evans met with Napa Expo and the City of Napa Parks & Rec department to discuss facilities. April also saw local cricket players Amritpal Bhatal and Jesse Healy invited to regional combines hosted by the ICC to identify cricketing talent for US national team selection. In addition local teenager Caen Healy completed his High School senior project with a visit to Coyote Valley Elementary School to do a cricket session closing the circle that started with the NVCC supply run to Calistoga in the aftermath of the Valley Fire in August 2015.

The clubs paying ranks grew in 2016 with the addition of a number of new playing members who were regulars throughout the season. American born Jamie Johnson who returned to the area after time on the East Coast, Indian born Chandanpreet Singh who works as a Vineyard Tech, and South African born Adriaan Foot recently moved to Napa and Assistant Winemaker at Dunn Vineyards all contributed both on and off the field to the club’s season.

After five successful seasons the NVCC has announced that it will be leaving The Fairgrounds in Calistoga and moving to Napa. Increasing pressure on the carnival lawn from other events in addition to the building of the new Boys & Girls clubhouse in close proximity to where they have traditionally played their games has meant the move has become a necessity. The club will be announcing details of their new ground in Napa early in 2017.