A historic day for the Napa Valley Cricket Club (NVCC) with their first ever cricket match in the city of Napa ended in a chastening defeat to wine country rivals Sonoma Gullies recently.

Despite a strong showing with the bat from Pete Sander and four wickets apiece for Karan Grewal and club captain Bernie Peacock NVCC had no answer to a strong team performance from the Gullies.

Having lost the toss NVCC were asked to field first as the Gullies took a brave decision to bat on a never played on before wicket at McGrath Field on the grounds of Napa State Hospital. The installation of a temporary Flicx cricket pitch is a first in the North Bay and allows the NVCC to play their games at multiple venues in 2017 as they host visiting teams at both McGrath Field and the Midway Green at the Napa Valley Expo.

“I was happy to bowl first” said Peacock “given that it’s our first time playing here on McGrath Field. Even though we’ve had some practice sessions we’re not really too sure how the pitch and outfield would play under game conditions.”

Peacocks confidence in his bowlers was borne out by early wickets as the Gullies lost six wickets in the first 10 overs. Opening with the pace of Karan Grewal and Adersh Maqsood, Peacock kept the Gullies tied down with precious few runs scored. Grewal nabbed the first Gullies wicket thanks to a sharp catch by Pete Cameron and from there the NVCC bowlers made inroads into the Gullies batmen. Two more wickets for Grewal in the eight over came after Maqsood clean bowled Gullies batsman Sankar and a further two wickets for captain Peacock in the 11th over in a double wicket maiden (no runs scored or conceded) had the Gullies reeling at 32 runs for the loss of seven wickets after only 10.2 overs. With Peacock enjoying the moment of having the opposition captain, and proven batsman, Patel trapped LBW (leg-before-wicket) in the 15th over it looked like an early lunch was imminent. 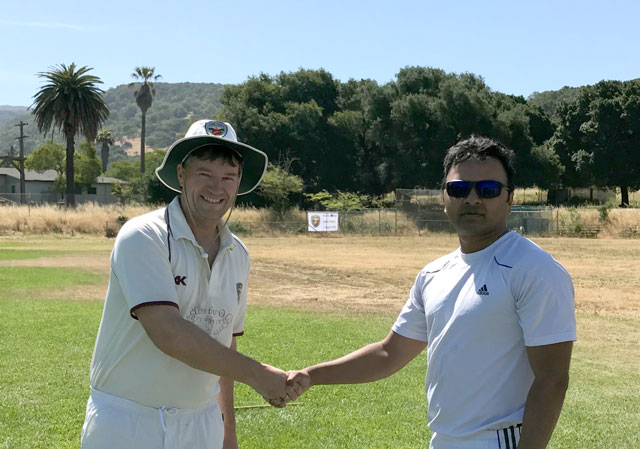 NVCC club captain Bernie Peacock (L) shakes hands with Sunny Patel of the Sonoma Gullies after Patel won the toss at their recent match. Top photo, NVCC and Sonoma Gullies teams pictured at the end of their game, which took place at the McGrath Field on the grounds of Napa State Hospital. Photos submitted

It was then that Gullies batmen Jay Patel and Nadeem Solanki turned the game in the Gullies favor. A ninth wicket partnership that garnered 70 runs (Patel 20 off 51 and Solanki 42 off 57) and spanned 14 overs, was the game defining partnership. The pair played smart, solid cricket and it took a stunning over-the-head catch from Cameron to dismiss Patel off the bowling of club president Rob Bolch to break the partnership. That allowed Solanki to bat for three more over with the tail for the addition of 12 more runs and put the Gullies at a very reachable score of 120 runs.

After lunch provided by NVCC sponsor Compadres Rio Grille the target of 121 runs to win in 35 overs seemed an easy get for the NVCC who had a strong batting line up.

“I think it’s fair to say that we went into the afternoon innings a little too confident of chasing down the Gullies score of 120” said Peacock “what was required was patience and application and sadly we didn’t have enough of both of those in our innings.” 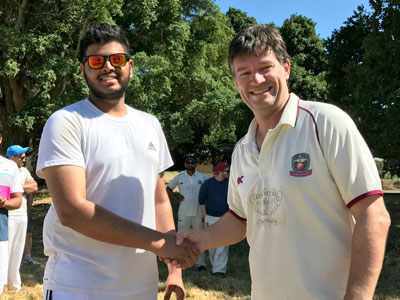 Sonoma Gullies Jay Patel (L) is congratulated by NVCC club captain Bernie Peacock after his receipt of the Clos du Val Man of the Match award.

NVCC opened the chase with the Australian pair of Pete Carson and Tim Kay who batted solidly on a quickening pitch but slowing outfield. The pair got little value for the shots they could play with Kay the first to fall after five overs for three runs off 19 balls. Carson outstayed new member Harjit Singh who was caught at gully to as skied shot off a wide ball from Gullies captain Patel. Carson lost his wicket bowled to Gullies Param Cheema and from there was not much respite for the NVCC batmen. The bright spot was provided by Australian-born Pete Sander who in addition to a stunning reflex slips catch to the Gullies Bhaumick in the morning notched up a very credible 17 runs off 27 balls that included two fours off loose balls down the leg side. Sander got little support from his team mates with a procession of NVCC batsmen joining him in the middle. With his score the only NVCC batsman in double figures, NVCC crumbled and were all out for 63 runs in 22.4 overs.

“It was tough to score runs” conceded NVCC captain Peacock after the NVCC innings “which made the knock by Nadeem and Jay for the Gullies all the more impressive. Given that it was our first outing here at McGrath Field we’ll take away the lessons we’ve learned about over-confidence and focus on doing the basics right next time around. Credit to Sunny and the Gullies for their performance as I thought it was a brave decision to bat first but they put a reasonable score on the board and then defended it, very well, with the ball.”

After the match, Peacock presented the Clos du Val Man of the Match award to the Gullies’ Patel for his contribution to the game with bat (20 runs), ball (2 for 14 off 3) and his stunning catch to dismiss NVCC’s Cameron.

Next Game – Sunday 18th June 2017 – and the inaugural City v County match as club members who live in the city of Napa play those who live outside the city limits on the Midway Green at Napa Valley Expo – from 10.30am.